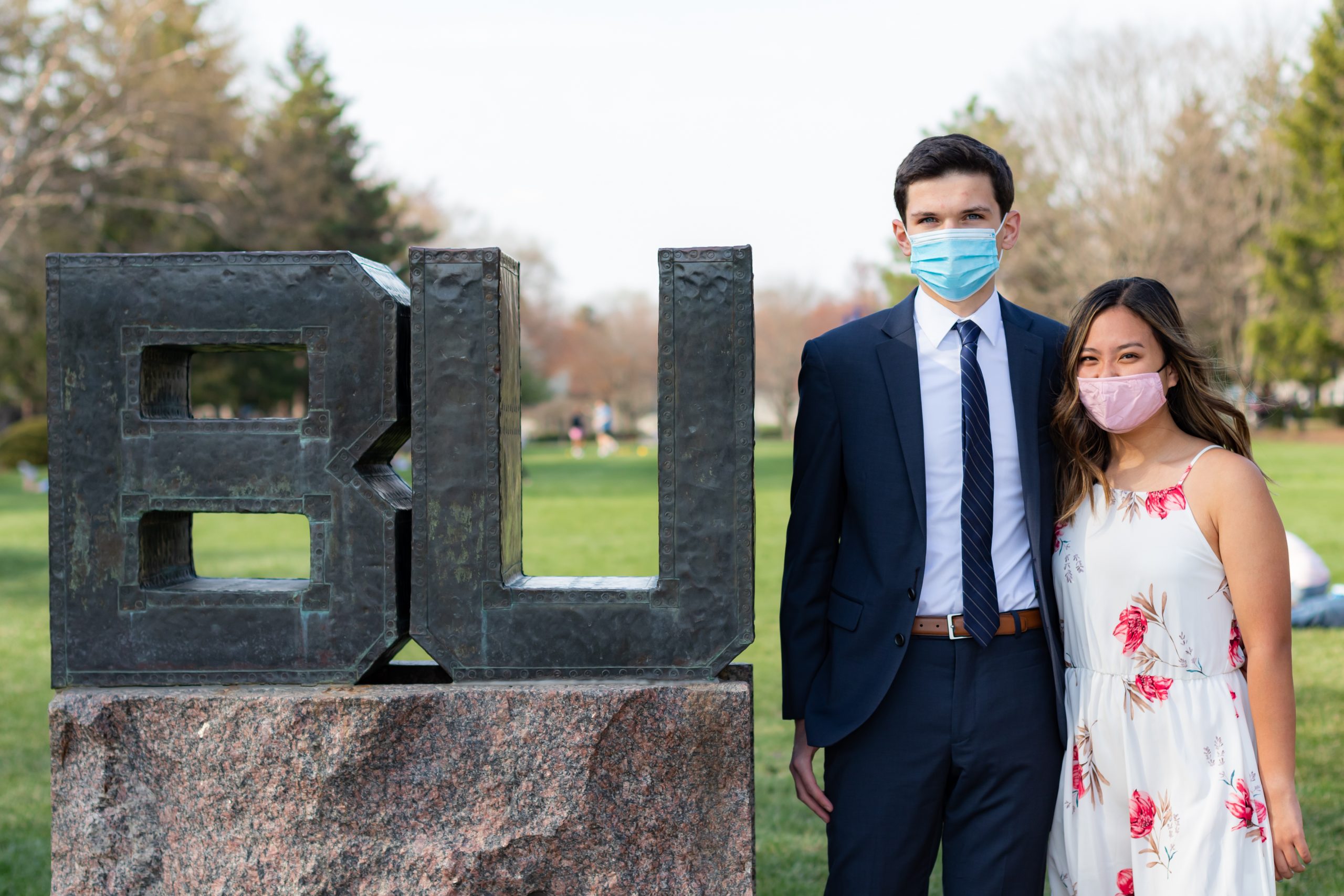 Will Gigerich and Miki Kawahara will take office at the beginning of the fall 2021 school year. Photo by Lauren Hough.

The announcement came after a debate on March 24 in Shelton Auditorium where all three campaign tickets shared their platforms. The email from SGA announced more than 1,700 students voted this year for president, vice-president and other student senators. That figure was nearly a 50% increase from last year’s election.

Gigerich, a junior criminology major and speaker of the SGA Senate, has been present during periods of what he described as “abysmal voter turnout.” He said he recognizes stark differences in campus engagement with student-supplied issues this time around.

“I think we kind of take it as a mandate at some level,” Gigerich said. “Students recognize that this campus isn’t working for them. There was real competition in the elections, and I think a lot of people got motivated.”

Similar to Gigerich, Kawahara, a junior health sciences major and Greek life senator, took the increased voter turnout as a sign of confidence in the pair’s platform and emphasized the campus’s excitement for a “normal” semester post-COVID-19.

Kawahara said she was excited to find students so receptive to their campaign’s platform, especially those points she and Gigerich remain so passionate about.

Some Butler students also expressed how Gigerich and Kawahara’s campaign focused on pressing issues of concern to the student population. Throughout the debate and campaign period, the pair outlined their mission of community, equity and advocacy, prepared with examples of how they intend to implement the values of their campaign in the Butler community.

During the March 31 debate, Gigerich and Kawahara articulated some of these issues, including allocating more money to the student emergency fund. They also plan to create a director of community engagement at the university to help supply students with more information about and how to get involved in campus activities. Kawahara mentioned specifically the pair’s plan to reformat Atherton Union so student government offices can be more accessible and responsive to students.

Meghann Chlebowski, a junior biology major, said she found the pair’s campaign points the most organized of the three tickets. This helped her envision what Gigerich and Kawahara’s administration would look like on campus.

“I liked that their platform had new student positions incorporated into it,” Chlebowski said in an email interview to The Butler Collegian. “It showed me that they want to expand SGA and seek new voices in the student body.”

Another key component of the campaign’s strategic plan was ensuring SGA representatives participate in campus community events. Without this connection to students’ interests and needs, Gigerich said, it is nearly impossible for students to gain a working relationship with their student government.

This was also a critical concern for Mason Runkel, a sophomore healthcare and business major, who said having someone with SGA experience factored into his voting decision. Balancing the proficiency to navigate internal SGA processes and sincerely representing students was one of the most important characteristics Runkel looked for when choosing a candidate.

“That aspect of their campaign was really appealing to me,” Runkel said. “To me, one of the most important things is making student government legitimately more representative of the student body, rather than just claiming that it’s representative.”

For Gigerich and Kawahara, the mission of representing all students begins now. The events of the past academic year show SGA has room to improve on various levels, and that improvement may be difficult.

“I think Will and I are going to give, literally, all we have to these roles and to the student body,” Kawahara said. “But also we understand that everything’s not going to change overnight.”

Gigerich similarly pointed to the motivation he has gained from knowing his campaign has the opportunity to truly make a difference in the Butler community.

“I think that was very inspiring for students at some level,” Gigerich said. “Like, it doesn’t have to be this way. We can work to find ways to make this a campus experience and student experience better for everybody.”