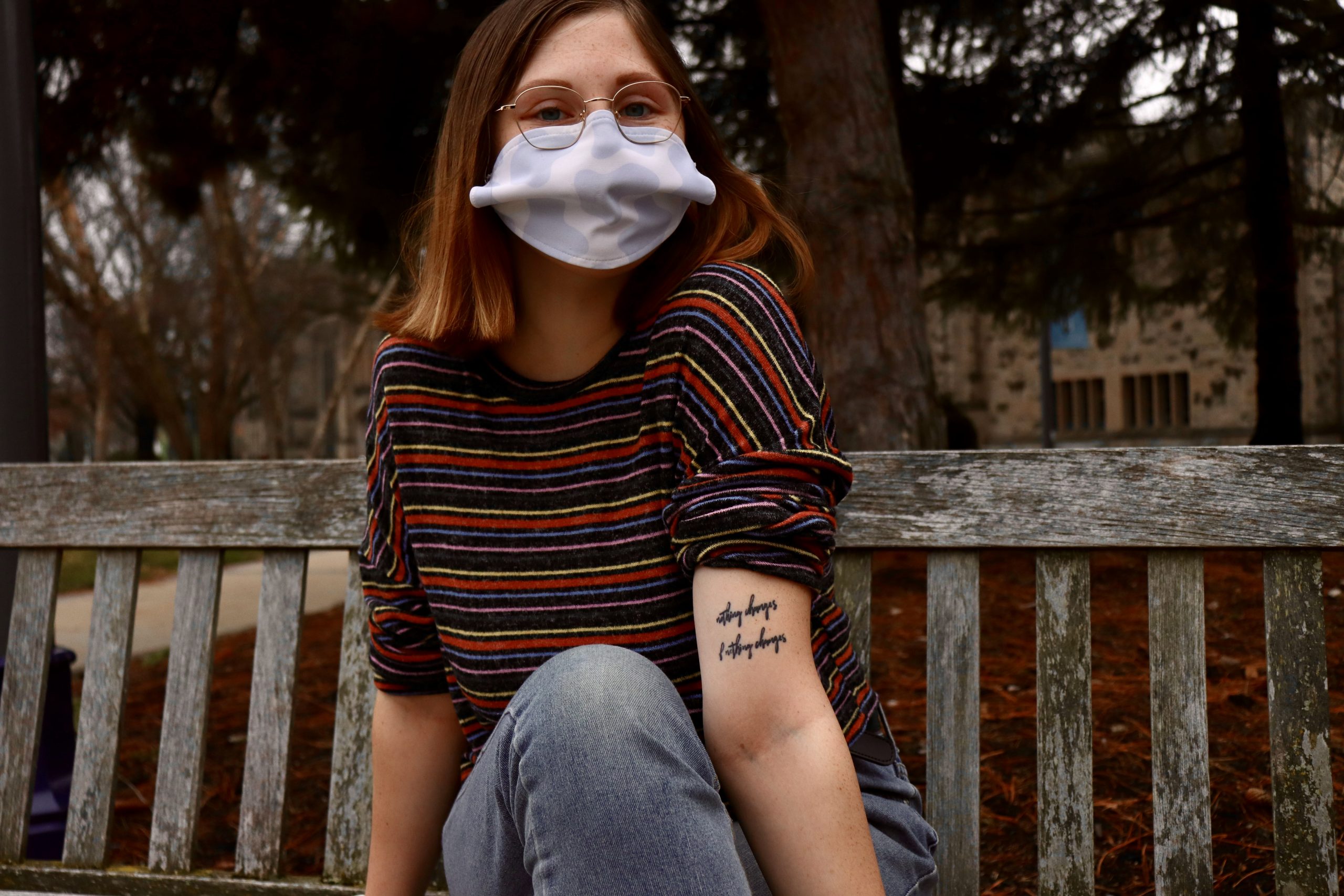 Jenn Whitaker shares the stories behind her tattoos and why she has a passion for them. Photos by Ben Caylor.

For thousands of years, people have adorned themselves with ink to show beliefs in magic, history and class status. Today, tattoos are mainly used for self-expression, available to anyone who desires them. Sophomore education major Jennifer Whitaker is one of those people, whose tattoo style centers on simplicity and elegance.

The Butler Collegian: How many tattoos do you have as of right now?

Jenn Whitaker: Right now, I have four tattoos. Three on my arm and then one on my ankle.

TBC: Can you walk us through two of your favorites?

JW: Yeah sure! [The one on my wrist] was the first one I got so it’s probably one of my favorites; it’s just a smiley face. And then this one [the one on my forearm] is probably my next favorite. It says ‘Ohana’ with a little outline of Stitch from Lilo and Stitch. I got that for a friend of mine who passed away.

TBC: How was your experience with getting tattoos? Was it painful or was it easy?

JW: I’m a wimp when it comes to needles and I’m not great with pain and stuff, but they weren’t that bad. I don’t think I passed out with any of them, which is surprising for me because I normally pass out anytime I get a shot or anything. I would say my worst one is probably on my ankle just because it’s very thin skin and near a bone, so that one was pretty sensitive but they weren’t bad!

TBC: As an education major, how do you feel about this idea that tattoos seem unprofessional to people?

JW: Yeah, I think it’s definitely changing. I know I had a lot of teachers with tattoos, particularly in high school, but I think that’s just because over time that is what it’s growing to [be.] I don’t think they look unprofessional, personally. I’ve talked to professors that I’ve had about them and teachers that I’ve shadowed have also had tattoos. But if it comes to it, I could always cover them up. I have no problem with that either.

TBC: You mentioned the Ohana tattoo. Could you go into a bit more detail about the meaning of this tattoo?

JW: So I got this one, I think two summers ago, and I was working at an early childhood education center called Ohana. The friend that passed away was also working there with me. She was also a huge fan of Lilo and Stitch. Stitch was her favorite Disney character, so I got this just to kind of remember her.

TBC: What would you say to people who are maybe thinking about getting tattoos? Is there any advice? Anything to let them know?

JW: I would say, don’t put too much stress on yourself. That’s what I would tell myself at least. I always wanted a tattoo, like the second I turned 18. Then, I didn’t get my first one until three months later because I was so stressed about finding the perfect tattoo with the perfect meaning, and it being super deep and personal. They don’t all have to have a super big meaning to them, you can just think they look cool! I would just say go for it, don’t be that scared if that’s something you want to get.