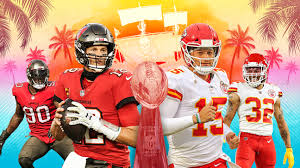 Tom Brady and Patrick Mahomes prepare to face off in Super Bowl LV on Feb. 7. Brady is making his 10th start in the Super Bowl, while Kansas City is looking to repeat as champions. Photo by ESPN.

The Kansas City Chiefs will take on the Tampa Bay Buccaneers in Super Bowl LV on Feb. 7. The Butler Collegian sports staff gives their predictions of who will lift the Lombardi Trophy.

The Super Bowl is the biggest game of the sports calendar, and the cable networks were gifted a perfect storyline for this year’s big game. Tom Brady, the 43-year-old living legend who left the dynasty he helped create in New England, is back with a new team. Now, he is facing the apparent heir of the next greatest player in football — Patrick Mahomes. While many are picking this game to be a shootout — and with good reason — this game ultimately comes down to which defense can get off the field when needed most. While Kansas City’s offense is elite, Tampa’s defense is not getting enough credit. In an instant classic of a game, the Bucs’ defense gets a crucial stop to help Tom Brady lift his seventh Lombardi trophy, dashing any G.O.A.T. debates still left unsettled.

Regardless of who wins this game, this is a Super Bowl we will not soon forget. We have a 43-year-old Tom Brady — already the greatest football player in history — attempting to win his seventh Super Bowl in his career, an achievement that would put him amongst the likes of the greatest athletes to have ever lived. His opponent is Patrick Mahomes, the $500 million-man, who is looking for his second consecutive ring. No player in NFL history has had a more successful start to their career, and if he keeps up his pace, he could eventually chase down Brady’s G.O.A.T. crown. Although all the talk will be about the quarterbacks, defense wins championships. And when it comes to defense, the Bucs defensive line gives them the edge over a depleted KC offensive line. Mahomes will make it close, but Brady will hold up the Lombardi at the end of the night.

The Super Bowl is an event always circled on the sports calendar. This year will be no exception. We will have the undisputed greatest player in football history, Tom Brady, facing off in his 10th career Super Bowl, and is aiming to win his seventh career title. He will be facing off against a young superstar in Patrick Mahomes, who already has an MVP and a Super Bowl title to his resume. This game will live up to the hype, with a great back-and-forth battle throughout. Thanks to a few late stops from the Kansas City defense, the Chiefs will ultimately prevail, giving Mahomes his second consecutive Super Bowl title.

Everybody grab some popcorn, find your seats and prepare for the show. Two of the most high-powered offenses will clash on Feb. 7 in a battle for the ages. On one side, we have the Tampa Bay Buccaneers, otherwise known as the 2016 Madden Ultimate Team. Between Brady, Leonard Fournette, Mike Evans, Antonio Brown and Rob Gronkowski, this team sounds downright unstoppable. On the other side, we have the Kansas City Chiefs, the Red Kingdom led by the man with the half-billion dollar contract in Patrick Mahomes. Around him, Mahomes has two players in the top in receiving yards in Tyreek Hill and Travis Kelce. Who will come out alive? It is the beginning of a new era in the NFL that Brady is no longer a part of. The Chiefs will claim back-to-back championships securing the start of a new dynasty in Kansas City.

Super Bowl LV will signal a new era in the NFL. Brady has dominated the league for years; now, it’s Mahomes’ turn to solidify himself as the one to beat. Brady and the Bucs escaped Green Bay with a win and won’t be as lucky this time. Kansas City’s defense may not be elite, but they do have the ability to make a play when needed. Expect Tampa Bay to jump out to a quick lead and Kansas City to do their damage in the second half. Mahomes will win super bowl MVP as the Chiefs’ dynasty continues.

The Super Bowl is here yet again and this time we have a very different matchup. 43-year-old Tom Brady and the Tampa Bay Buccaneers will be facing 25-year-old Patrick Mahomes and the Kansas City Chiefs. While everyone is saying that Brady is going to get another ring, I seem to think differently. This is going to be a shootout and a very close game, but Kansas City will be able to pull off the win. Tampa Bay will be scoring lots of points in the first half, but Kansas City will come back on fire in the second and win it all, 41-38, making Patrick Mahomes Super Bowl MVP once again.

I had the Kansas City Chiefs winning the Super Bowl at the beginning of the season, so I’m going to stick with it. I believe the Chiefs’ offense is going to be too much for the Buccaneers’ defense. Patrick Mahomes is going to do what he does best and make amazing throws under pressure, something the Buccaneers’ front seven can create a lot of. I expect Mahomes to play well enough to earn his second-straight Super Bowl MVP award. Tom Brady will have an outstanding night as well. The game will come down to the last drive, with Mahomes and company lifting the Lombardi at the end of the night.