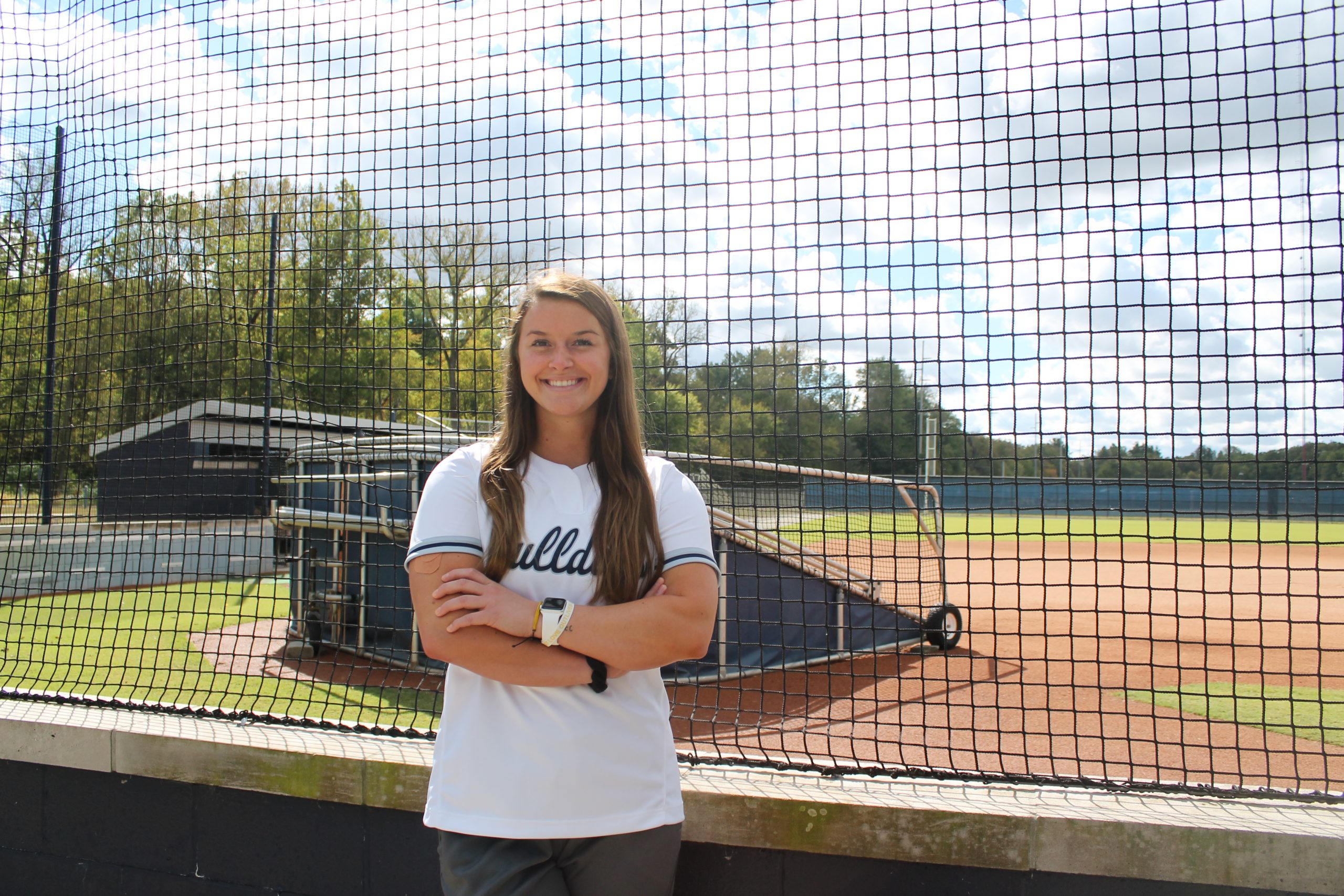 Claire Gilliand battled a fractured skull and hematoma to play her final year of softball in college. Photo by Francie Wilson.

Content Warning: This story includes mention of suicide. If you or someone you know is at risk, please stop and contact the National Suicide Prevention Lifeline for support: 1-800-273-8255.

While the Butler women’s softball team warmed up, Claire Gilliland was lining up the bats behind them. She reached for a bat and then bang! She blacked out. She doesn’t remember what happened next. The next thing she knew, she was on the ground, with blurred visions of her teammates asking her if she was okay.

For then-junior softball outfielder Claire Gilliland, Saturday, Feb. 8, 2020, began as a normal day. Her team was in the middle of their opening day weekend tournament in Rosemont, Ill., and they were getting ready for their second game of the day that night, vs. Loyola Chicago.

Gilliland was already not playing due to a recently-repaired labrum. But she and her parents decided to drive up to watch her team play anyway so she could provide her team support.

As she was stowing away the bats, though, an errant throw knocked her to the ground and caused her to go unconscious. While her teammates asked if she was okay, a little pain started to set in, but nothing debilitating. She got up and walked to her parents without any help. She seemed fine, all things considered. Her head was hurting, but as she told her parents and her team at the time, she still wanted to stay and watch the game.

Looking out for Gilliland’s best interests, the adults around her decided that was not the greatest idea. While the game was wrapping up, her parents drove her back to the hotel. After they hurriedly checked in, she laid down on the bed. A red liquid started to dribble down the side of the bed, Gilliland noticed.

What’s that? She touched her ear, and the red liquid began to look more like a crimson pool. Frightened, her parents hurried her to a minute-clinic. In the car, she started spitting up blood. Seeing their daughter slowly lose consciousness again, her parents re-rerouted to the emergency room instead.

Gilliland’s parents waited in the trauma room…and waited…and waited. A doctor finally swung open the doors and broke the news. The doctor and her parents walked into Gilliland’s room, where the doctor delivered the news.

Gilliland recovered from the head injury a lot quicker than expected. And when she went to get an update from her shoulder surgeon, she was pleasantly surprised to hear that as soon as her head was cleared, she would be technically cleared to be able to pinch-hit and pinch-run, meaning that she had a real chance of getting to play last season.

Her coaches, especially head coach Scott Hall, were excited to hear the news. In two years, the outfielder has hit six home runs.

“She’s one of the most powerful hitters I’ve coached when she’s healthy,” Hall said. “Obviously injuries have kept her from fully being able to improve on that… Great range, good glove, good arm… when Claire’s healthy she’s a difference-maker for us.”

Treading carefully, she and her parents decided it was best if she got a second opinion. The second doctor told her worse news: there was a good chance that she would never be able to play softball again.

While on Spring Break in March for a tournament, Gilliland — and the rest of the Butler women’s softball team — found out their season was officially cut short due to the COVID-19 pandemic.

I did not work through a labrum surgery, a fractured skull, and a brain bleed for the last 5 months just for the coronavirus to keep me from coming back this season let me tell ya https://t.co/mFkcRIXYej

Her teammates, additionally, were frustrated for Gilliland, especially her teammate and first-year roommate Alyssa Graves.

“It’s very frustrating that she has not gotten the playing time she deserves because of injuries,” Graves said. “She is so hardworking and persistent, and I hope that eventually she will get rewarded for that.”

Gilliland intends on making a return to softball. She’s harbored the dream since she was a little girl. Back then, she made a promise pact with her brother that one day, she was going to grow up and make the All-Big East Team before she graduated. Last November, Gilliland lost her brother Chad to suicide, which came, in large part, to injuries he sustained playing football at Illinois College. More than ever, she wants to fulfill her promise to her late brother.

“When I say that she’s strong, she’s bounced back from surgeries that are somewhat expected, I would expect that, but the loss of your brother, she’s handled it so well,” Gilliland’s mother said. “She’s not out for sympathy, none of us are, we just want to help people who are in a similar situation.”

A devastating loss for the family has spurred them to get involved in their community and prevent similar situations from unfolding. The Gilliland family is hosting an event at Cedar Creek Winery and Brewery on Nov. 21, International Survivors of Suicide Loss Day. Additionally, the Gilliland family is associated with the American Foundation for Suicide Prevention, which offers guidance and resources to people and families who experience mental health difficulties.

While part of Claire’s reasoning to never give up on softball is borne in her love of the game, and her persistence and wanting to prove the doctors who said she couldn’t play again wrong, a bigger reason, above all, motivates her to keep going. This is her last chance to make the All-Big East Team.

“I am going to do everything in my power to make it happen in honor of him.”

You can donate to #TeamChad to bring awareness to suicide prevention and mental health stigmas. Participating in the Out of the Darkness Indianapolis Experience can help fight suicide and support AFSP’s bold goal to reduce the suicide rate 20% by 2025.