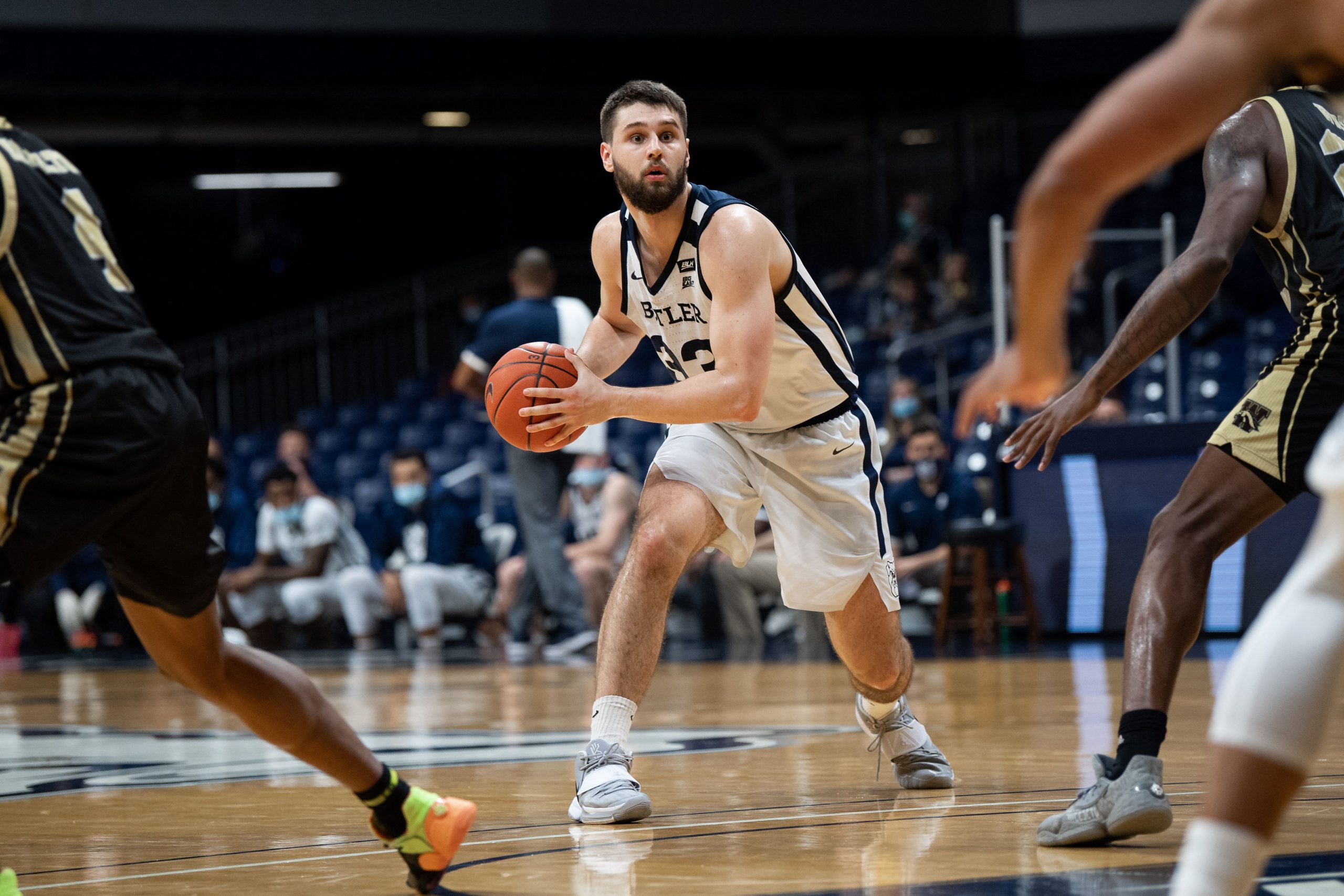 Bryce Golden looks to pass to an open teammate in Butler’s 66-62 win over Western Michigan on Nov. 25. Golden tallied 6 points and 3 rebounds in the winning effort. Photo from Zach Bolinger.

After eight months since playing in their last game, the Butler men’s basketball team opened the new season with a 66-62 win over Western Michigan. Aaron Thompson led the way for the Bulldogs with 21 points, while shooting 8-for-11 from the free throw line. Grad transfer Jair Bolden also stepped in and contributed 15 points and 9 rebounds. While it wasn’t pretty, a win is a win. Butler extended its non-conference home winning streak to 59 games and won its 22nd-straight home opener. Here’s what we learned.

In 2019-20, Butler utilized the long-range shooting of Kamar Baldwin, Sean McDermott and Jordan Tucker to spread the floor and create driving opportunities. This year, that aspect of the game could become one of this year’s team’s biggest challenges. The Bulldogs shot 5-for-20 from behind the 3-point line and many of those attempts did not look comfortable. In fact, aside from Aaron Thompson, Bryce Nze and JaKobe Coles making their lone attempt of the night, all of the 3-point shooting came from Bolden, who shot 2-for-7.

This struggle to effectively stretch the floor created all kinds of problems for Butler’s offense to get into a rhythm. Thompson was aggressive in driving to the basket, but there was little space for him to do so. The Broncos could pack their defense in and close out on shooters from the outside. While first-game nerves and adjustments to a new season with no exhibitions to iron out wrinkles may have played a role, concerns about this team’s ability to shoot from long range were legit.

2. Aaron Thompson is the heart and soul of the team

When players like Kelan Martin and Kamar Baldwin are the stars of a college basketball program, ample scoring is not necessary from a player like Aaron Thompson. In his first three years, Thompson’s responsibilities largely were centered around facilitating the basketball to drivers and shooters and hounding opponents on the defensive end. This year, he may have to take on a new responsibility: scoring the basketball. Thompson drove to the rim aggressively against Western Michigan, drawing 11 free throw attempts throughout the game. He made 8 of those attempts. If “AT” can average 70 percent from the line this season, that would be a huge boost to this Butler offense.

On the other side of the coin, Thompson continued helping out the future of this program. He could be seen throughout the game coaching up the young freshmen or communicating with fellow senior Bolden about defensive assignments. Similarly to the way Kamar Badlwin did for him, Thompson is taking these young guards under his wing and that can only mean good things for this team moving forward. Without knowing the severity of Bryce Nze’s ankle injury, Thompson could be asked to take on even more leadership responsibilities on the court.

3. Newcomers will be forced to contribute early and often

Among the top storylines in tonight’s game was the impact newcomers were going to have to make for this year’s team to be successful. Myles Tate and Jair Bolden started in their Butler debuts and logged 31 and 30 minutes, respectively. Freshmen Chuck Harris and JaKobe Coles also played in big minutes with 20 and 19, respectively. For the most part, those newcomers impressed. Perhaps the most impressive of all was freshman big JaKobe Coles.

While he only tallied four points on the night, Coles did so much more than the statsheet shows. Coles racked up 5 rebounds — two of which were offensive boards that extended Butler possessions — and numerous defensive interruptions like deflections or steals that made life tough for the opposing bigs. Considering this team has not played many full games together, these first few games will be huge for these freshmen to make a mark on Coach Jordan and the rest of the staff. Expect Coles to start logging minutes as first big man off the bench and a potential starter if Nze’s injury is more severe than anticipated.

Winning by four against a team that was picked to finish last in the MAC was not what many Butler fans hoped for when they woke up this morning. And while the Bulldogs did not play their best basketball, there are a few things to note that make the result not so disappointing. For starters, Western Michigan will not finish last in the MAC this season. The Broncos showcased their ability to shoot the ball — 50 percent from 3 on the night — and ability to make plays on both ends of the floor. Secondly, this is the first game of a season where teams have had limited practice time and no exhibitions. This is the first film Butler has of themselves and will make adjustments moving forward. While this certainly doesn’t seem like the best team Butler has fielded, a few bright spots from tonight’s game indicate that better games are ahead this season.