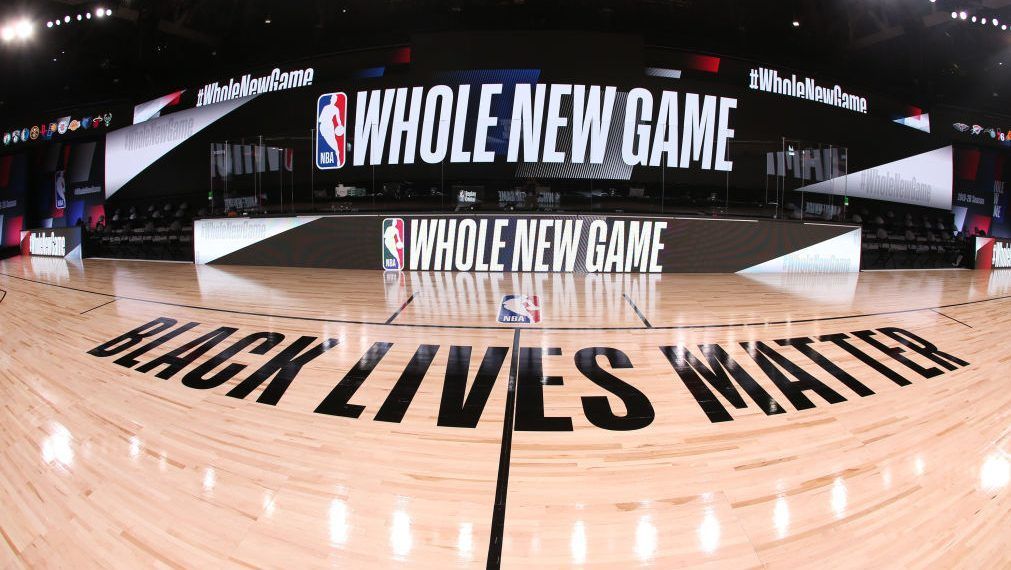 The NBA has been a strong advocate for the Black Lives Matter movement and other nation-wide causes for social justice. Photo by Associated Press.

Five months ago, the NBA reached uncharted territory as the COVID-19 pandemic began to wreak havoc on the United States.

Shortly after the first player tested positive, the NBA shut down its season on March 12 for the foreseeable future. It was pretty clear, however, that no one would be able to see when or how the NBA would resume its season.

While the league was on hiatus, the world turned upside down. COVID-19 cases soared into the millions, with the U.S. accounting for almost one-fourth of them.

The senseless killings of George Floyd and Breonna Taylor by police sparked national protests that created a unified voice against systemic racism.

These two issues made it hard for anyone to even think about basketball, let alone come up with an unprecedented way to resume the season. However in the midst of all the chaos going on, it seemed like basketball was what people needed to help them get through this tumultuous year.

How do we keep the coronavirus from spreading throughout the league? How can we support the fight to end racism in our country? How can we continue to produce entertaining basketball?

Let’s start with the first question: how do we keep the coronavirus from spreading throughout the league? “The bubble” is the answer. More specifically, the ESPN Wide World of Sports Complex in Orlando, Florida.

The NBA realized that the best way to keep everyone who was essential to the restart safe was to have it in one centralized location. To enter, everyone had to test negative three times and players are still tested daily.

This plan works so well because it makes it very difficult for the virus to enter “the bubble,” and if it were able to somehow penetrate it, health experts would be able to find the source immediately.

Plus, the players have all the necessary amenities like room service, training facilities and rehab centers. A noteworthy fact to add: out of the 341 players in “the bubble”, not a single one has tested positive for COVID-19.

This continued success of keeping the virus out has allowed players to invite a close family member or friend to the bubble as well.

As the NBA succeeded in keeping the coronavirus out, they also succeeded in creating a platform for players and coaches to speak about racial injustice in America.

As people began to hold those in power accountable for their parts in perpetuating racism, many players, coaches and fans looked to the NBA for their response to the nation’s social awakening.

During the shutdown, several NBA players including Jaylen Brown, Russell Westbrook and Bradley Beal joined Black Lives Matter protests in their cities. Even more players used social media as a platform to express their frustrations with the treatment of minorities in today’s society.

It was obvious that this movement would not dissipate when the season began and the NBA had to do more than talk to earn the respect of its players and fans. So they adapted an idea from their sister league, the WNBA, to help initiate change.

Since the restart, players and coaches have also taken any opportunity to talk about social justice and equality in front of the media.

From answering every question with “arrest the cops who killed Breonna Taylor” to calling Black Lives Matter a “lifestyle, not a movement,” those within the league have not backed down from fighting racism. Though this is a small step for the NBA, it is good that the league has become a public advocate against racism.

Another positive take away from the NBA restart is the rise of intensity in games. The first two games in “the bubble” were decided by a combined four points.

Every game felt like a playoff game, especially the ones that included the five teams in contention for the 8th and final playoff spot in the Western Conference.

Now that the playoffs have officially started, the intensity has risen even higher. Without the crowd atmosphere, no team has a home team advantage and this forces teams to dig deep in situations that would otherwise be controlled by fans.

With multiple primetime games everyday, it’s safe to say the NBA hasn’t had any problem with keeping fans entertained.

Looking at the NBA restart as a whole, I think the organization has set the bar high for other sports leagues to follow.

The NHL has seemed to follow in the footsteps of the NBA, creating their own bubble, and are looking to have a successful postseason.

The MLB, on the other hand, has had a string of postponements due to COVID-19 outbreaks on multiple teams. The NFL, America’s favorite sport, has yet to begin and may be able to learn from the NBA as they plan to begin their season.

But, only time will tell if the rest of the leagues will be able to have the same level of success that the NBA has had.