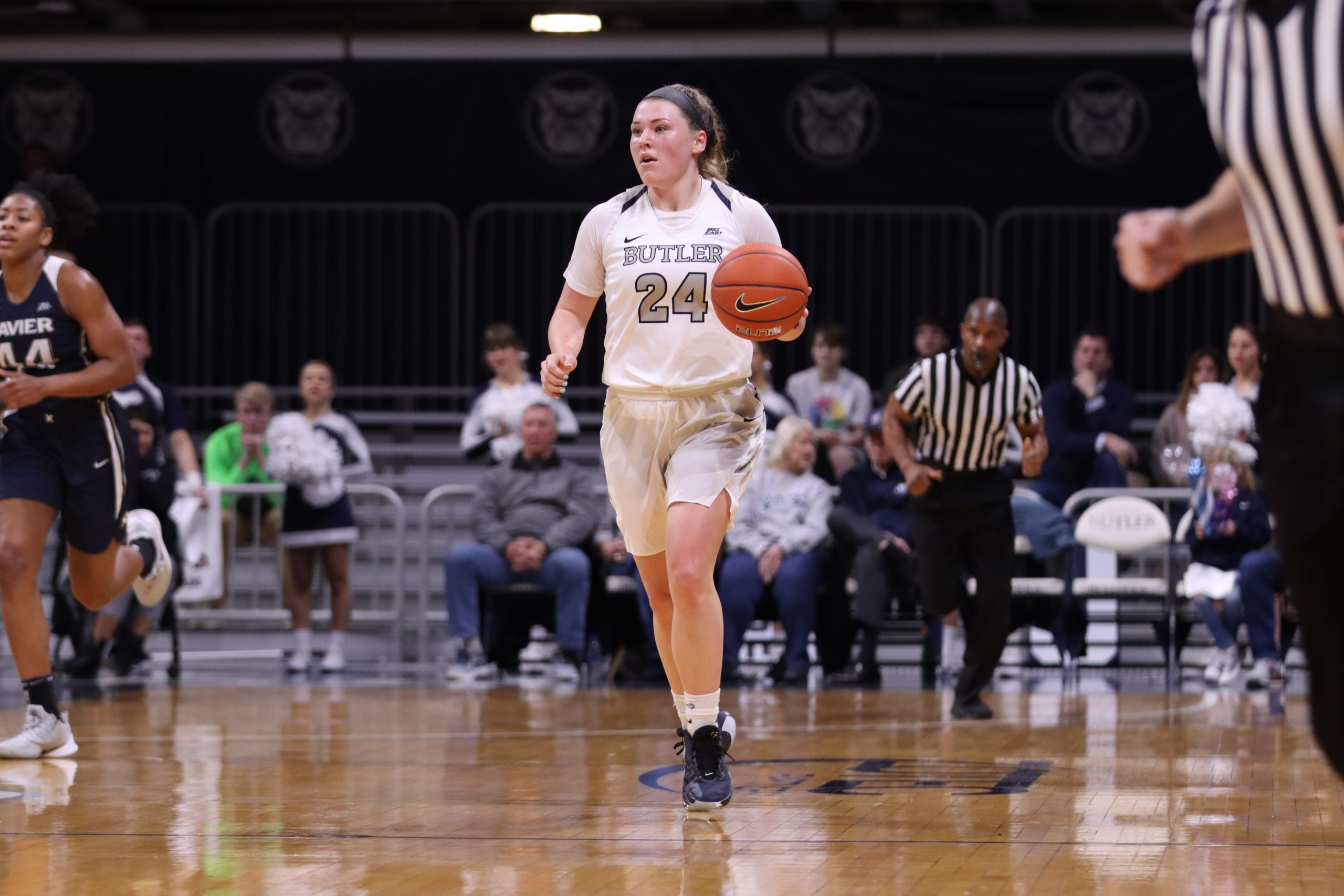 Kristen Spolyar dribbles down the court during a game on Jan. 31. Spolyar leads the team in scoring, averaging 18.4 points per game. Photo by Xan Korman / Collegian file photo.

Following its second straight season with an 11-7 Big East regular season record, the Butler women’s basketball team is set to take on Seton Hall on March 7 in the Big East Tournament quarterfinals in Chicago.

The Bulldogs, 19-10 overall, enter the tournament as the five seed, while the Pirates are the four seed. The two teams finished with identical conference records as part of a five-way tie for third place in the Big East standings.

It’s a quick rematch for Butler, which fell to Seton Hall 66-53 in New Jersey on March 1 to conclude the regular season. It was a regular season sweep of the series for the Pirates, who also defeated the Bulldogs 67-62 at Hinkle Fieldhouse on Dec. 29 in Butler’s conference opener.

Butler outshot Seton Hall from the field in both of their two regular season meetings. In December, the Pirates knocked down 11 3-pointers, compared to just two from the Bulldogs, who also committed 20 turnovers. After leading for most of the game, Butler was outscored by Seton Hall 24-8 in the fourth quarter.

In their most recent matchup, both teams made a similar number of threes, but the Bulldogs turned the ball over a season-high 26 times and sent the Pirates to the line for 19 free throws, of which they made 16.

With today's RPI update, the bracket is now ???.

See you in Chicago! pic.twitter.com/DbuvongoIa

To advance in the conference tournament, Butler will have to get past a Pirates team led by three double digit scorers, upperclassmen Shadeen Samuels, Alexis Lewis and Desiree Elmore. Seton Hall lost to St. John’s in the first round of last year’s Big East Tournament before falling to Toledo in the first round of the WNIT.

The winner will advance to the semifinals of the tournament to take on the victor of the quarterfinal contest between one seed DePaul and either eight seed Providence or nine seed Georgetown.

Given their 93rd position in the RPI rankings, the Bulldogs likely need to win the Big East Tournament to receive an NCAA Tournament bid, though a WNIT bid appears likely regardless of conference tournament outcome.

Butler finished the regular season with an identical conference record as a year ago despite a significantly different team and a different path. The Bulldogs lost over 50% of their scoring from last season, highlighted by the departures of graduated seniors Whitney Jennings, Tori Schickel and Michelle Weaver.

Current senior Kristen Spolyar has upped her scoring average from roughly 13 points per game a season ago to over 18 per contest this season. The guard was named Big East Player of the Week in mid-January and has scored 25 or more points in eight games this season.

Neither of the team’s second and third-leading scorers, redshirt junior guard Genesis Parker and freshman guard Oumou Toure, played a single minute for the Bulldogs last season. Parker is averaging not far from 10 points per game and has started all but one contest for the team this season. Toure is second on the team with 9.2 points per contest in conference play and has scored in double figures in three of the team’s last five games.

Senior Shae Brey has been an all-around contributor this season, averaging roughly 5.5 points and rebounds per game, along with leading the team in assists.

After posting an 8-3 nonconference record, Butler began Big East action with back-to-back home losses to Seton Hall and St. John’s. Head coach Kurt Godlevske said those struggles proved to be an opportunity for upperclassmen to take the lead.

“I think that was just a rallying point for the seniors,” Godlevske said. “Thankfully for them, the underclassmen bought into, ‘hey, we’ve got to do this together, we have to have more energy, we’ve got to have more focus in practice.’ It was like one foot in front of the other, it just kept on building.”

Following those losses, the Bulldogs won nine of their next 10 games to pull into the race amongst the top teams in the conference standings. Junior guard Upe Atosu, who’s averaged nearly eight points per contest in Butler’s last 10 games, said Godlevske’s support through those challenges helped the team push through.

“Coach G has been saying that he believes so much in us,” Atosu said. “He believes that we have so much talent to be at the top of our game. … I feel like his encouragement, his words actually contributed to the [turnaround].

After that stretch, Butler struggled in the final weeks of the regular season. The Bulldogs won their final two games at Hinkle Fieldhouse but dropped their last four road contests to eliminate any hopes of a top-two finish in the conference standings.

The quarterfinal matchup will take place at Wintrust Arena at 3:30 p.m. ET on March 7. The game will be broadcast on FS2.