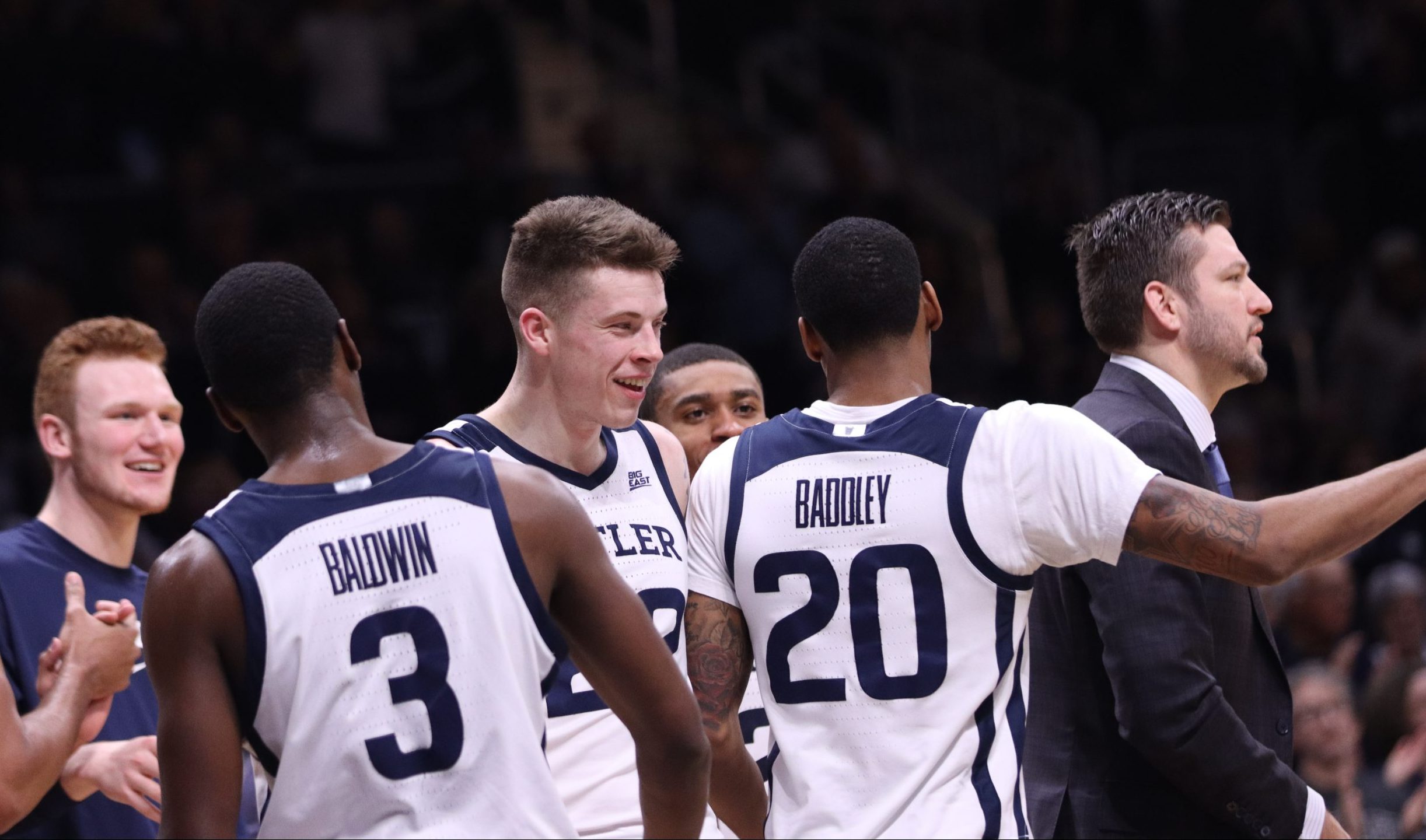 Behind their largest second-half scoring output of the season, the Butler men’s basketball team defeated St. John’s by its largest margin of conference play on senior night at Hinkle Fieldhouse on March 4. The Bulldogs’ 77-55 victory moved the team back above .500 in Big East play with a 9-8 conference mark.

Here’s a look at some of the key storylines, stats, notes and quotes from the Bulldogs’ emotional win:

Butler couldn’t get into a great offensive rhythm in the first 20 minutes, but ended the first half on a positive note. Bryce Nze finished the first half 3-of-3 from the field, but his teammates combined to shoot just 35% – 8-of-23 – in the first frame, missing too many open looks. After trailing by eight points with just under five minutes left in the half, Butler went on an 11-4 run to go into halftime trailing by just one point, 32-31.

That second half offensive outburst started with getting stops on the defensive end. The Red Storm scored seven points in the first 3:31 of the second half but were then held to four points over the next roughly nine minutes. “Our defense was the ticket,” Butler head coach LaVall Jordan said. “You have to get the stops to be able to [have a strong offensive half]. That was the most important part of it.

Sean McDermott had a sensational senior night performance. The forward entered the game averaging seven rebounds per game in Big East play, the fifth-best mark in the conference. By the end of the first half, he’d already accomplished one half of a double-double, tallying 10 rebounds. By the first media timeout of the second half, McDermott reached a double-double, his third of the season – and his career. McDermott finished with a team-high 16 points along with 14 boards. It’s just the third time in the last four seasons that a Butler player has totaled 14 or more rebounds in a game. Baldwin and Kelan Martin were the only other Bulldogs to reach such a mark.

Five players scored in double figures for the Bulldogs for just the second time this season. McDermott led the way with 16 points, followed by 14 from Jordan Tucker, who converted on 5-of-6 free throw attempts in addition to knocking down three 3-pointers. Aaron Thompson scored 13 points, while Kamar Baldwin scored 12 and Bryce Nze tallied 11, shooting a perfect 5-of-5 from the field. In all, nine different players scored for the Bulldogs, including all four of the players honored for senior night.

St. John’s couldn’t stay in front of Aaron Thompson, and he capitalized. The junior point guard beat multiple Red Storm players to the basket, resulting in multiple layups and fouls. “He stepped to the line and made some big free throws,” Jordan said. “They weren’t leaving Sean, and they really, really had a lot of attention on Kamar, so we just needed to open up the court and space it. So for him to be able to drive and score was big. Or just draw defenders and make the right decisions.”

Derrik Smits returned to the floor for the first time in three weeks, and made an impact. The graduate transfer had been sidelined since suffering a knee injury against Xavier on Feb. 12. It wasn’t a flawless performance, but Smits showed that he could be a significant piece of the puzzle going into postseason play. In seven minutes, Smits was 2-of-2 from the field with four points and two rebounds.

Butler’s victory guarantees a first round bye in the Big East Tournament. The Bulldogs entered the week tied with Xavier and Marquette for fifth in the conference standings with an 8-8 Big East mark. With both of those teams losing their first matchup of the week and Butler’s win, along with the tiebreaker scenarios, the Bulldogs are now guaranteed to finish sixth or higher in the final conference standings, ensuring they won’t play until the quarterfinals of the conference tournament.

Up next: The Bulldogs will travel to Cincinnati to take on Xavier on Saturday, March 5 in their regular season finale. Butler defeated the Musketeers 66-61 at Hinkle on Feb. 12 despite a number of second half challenges. Aaron Thompson and Derrik Smits both exited with injuries in the second half while Bryce Nze and Bryce Golden both battled foul trouble. The Bulldogs were able to knock down a few crucial shots to stop Xavier runs. The Musketeers are now 8-9 in conference play following their March 4 loss at Providence.