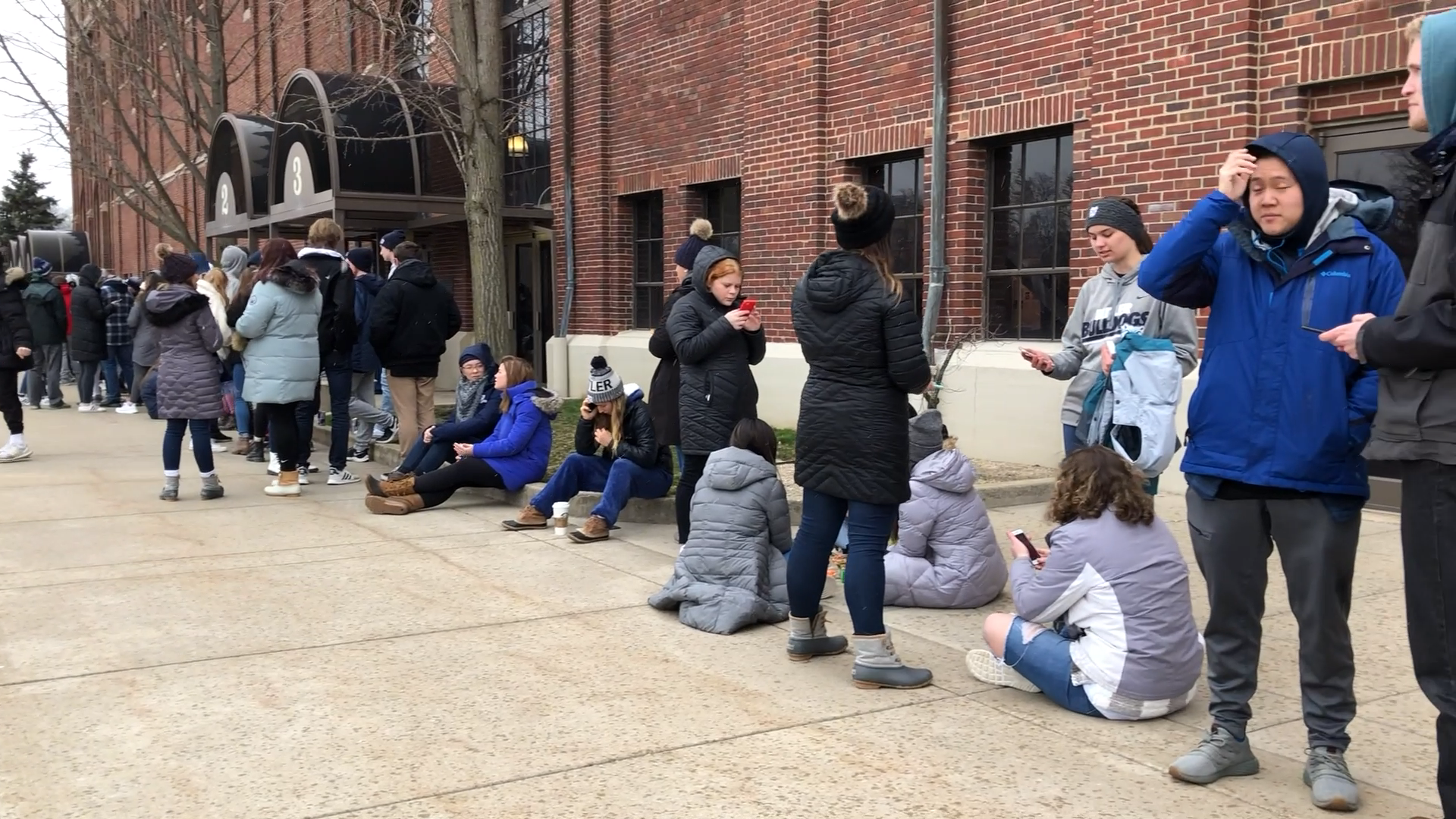 Rain or shine, Butler students line up before men’s basketball games to claim what they believe to be the best seat in Hinkle Fieldhouse.

With the men’s basketball teams reaching as high as no. 5 in the AP polls at one point in the season, students have been showing up to games hours before doors open to share their support. Doors typically open an hour and half before game time, meaning some students are waiting four hours before tipoff.

On Feb. 5 and Feb. 12, Butler had sell-out home games against Villanova and Xavier, respectively, both starting at 6:30 p.m. David Quintanilla, a sophomore sports media major, was the first student in line at the Xavier game — he arrived around noon. More people began to show up around 2:30 p.m.

The Butler men’s basketball program has had every student ticket claimed for Big East games and operated a standby line at each game, according to officials in the Butler Athletics sales department.

Along with the students at 2:30 p.m. came a wintry mix of snow and sleet. Ryan Fredrick, a sophomore risk management insurance, said he arrived closer to 3:30 p.m.

“It was kind of delightful at first,” Fredrick said. “It was like a winter wonderland, and then now it’s hailing.”

These conditions, however, seemed like nothing to some students who braved the polar vortex before the Villanova game on Jan. 22, 2019. Temperatures that day reached as low as 14 degrees. Quintanilla said he brought a lawn chair and was prepared to sit outside the arena before deciding it was too cold and moved into Hinkle.

With wind chill temperatures below zero, event staff allowed Quintanilla to stay inside, but this generally makes their job more difficult. Rob Ollikainen, manager of ticket and fan development, said sometimes students attempt to use alternative entrances instead of the designated student entrance to Hinkle.

“Adding with the line being longer, students start trying to go in other entrances,” Ollikainen said. “Which does not help us, and they are not supposed to do that.”

The line of students waiting for doors to open is not only noticed by students. Butler parent Lisa Excell said the lines were something she noticed on her way to the game.

“I’m really excited,” Excell said. “I love seeing the kids. Today I drove up, and it’s the Xavier game, and to see them out at like 3:30 lining up to see the game, I said it’s such a thrill for me to see the kids lining up.”

Lindsay Martin, the director of athletic marketing and licensing, said that building a positive environment plays a large role in her job as well as others’ in the Butler athletic department.

“At the end of the day, all of our jobs, even though we are in marketing and ticket sales, is to do whatever we can do to make sure that our teams have the best chance to win,” Martin said. “For us, that’s making sure they have the best home-court environment that we can.”

Although some students stand in line for hours, they have found solutions to help pass the time. Aaron Marshall, a first-year statistics major, takes naps in line or plays games on his phone, while students like Maddy Jensen, a sophomore youth and community development major, plays Euchre in line with friends.

Some students arrive to games early with the hopes of getting TV time, while others get there early to claim seats. Olivia Ryder, a sophomore criminology and psychology major, said the front row of the Dawg Pound section by the Butler bench is the best because she likes hearing what is going on on the court.

Good seats are not the only thing that attracts students to the game.

“I wanna show my enthusiasm for Butler athletics and the school and Butler’s basketball team,” Quintanilla said. “Not only do I have to be loud and excited, but to show support as players are coming by is one way to help lift up the program.”

If students do not have tickets for the designated student sections, they can get standby tickets for certain games. However, Martin said she doesn’t consider there to be many students waiting in the standby lines.

“I think the highest number of students we have had in a standby line would be 50 maybe,” Martin said. “Most of the time it’s less than 20.”

Martin said they have recently begun advertising the time the stand by line will be released to manage the line.

For each game, designated student sections are on both ends of the court and part of the upper level.

Depending on a number of factors like the time and day of the game, it is possible for 300 level seating to be made available to students. Director of sales Brady Collier said available standby seating varies from game to game, if any space in the student section will not be filled.

Collier said they usually start with about 50 standby tickets in the 300 level and they adjust from there.

He said the day of the week of the game, and whether it falls during winter break or not, impacts how many regular student tickets and standby tickets will be released.

Before each game, an email is sent to all ticket holders containing information about the specific game. After each game a post game survey is sent to ticket holders which allows problems to be addressed and improved for the following games.

There are also separate end-of-the-year surveys made for general fans and Butler students. These surveys allow attendees to look at the season as a whole and give feedback about the overall experience.

According to the Student Section survey sent out to students by Butler Athletics after the 2018-19 basketball season ended, almost 70% of students felt negative about having assigned seating at each game. General admission for games in Hinkle allows students to choose their seats. Having assigned seats would make lines shorter, but give students fewer seating options.

Representatives in the market marketing department said that if student’s opinions of the line changed, they would adapt their policies as well.

Butler basketball has adapted in the past. Martin, who graduated from Butler in 2005, said men’s basketball games have changed since she was a student.

“Most of the time I could walk up 20 minutes before tipoff and be in the third row,” Martin said “A great crowd on a Wednesday night for us was 3,000 people; now we sold out a game against Villanova on a Wednesday last week — just to see that growth has been, it’s really exciting.”