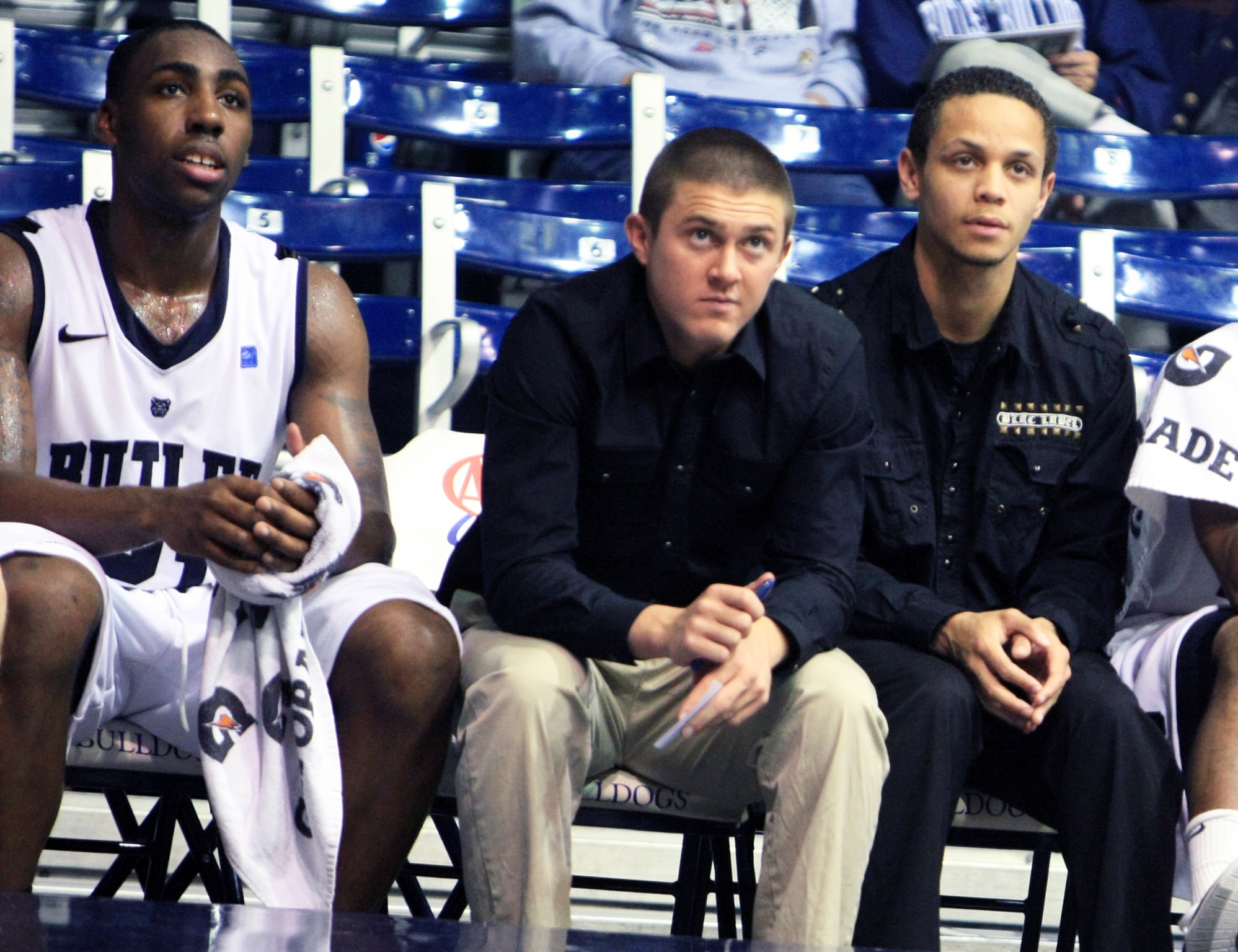 Rotnei Clarke (center) watches a Butler game from the bench in 2012 during his transfer year. Clarke is currently playing for Pallacanesto Mantovana in Italy. Collegian file photo.

Rotnei Clarke doesn’t know when he will leave the game of basketball. Or if. Facetiming from his living room couch in his apartment in Mantova, Italy, Clarke hunches forward and rubs his bearded chin.

“I think I’ll continue to take care of my family as long as I can,” Clarke said. “But obviously, being in the NBA was always the main goal for me.”

Since graduating from Butler in 2013, Clarke, 30, has toiled overseas for seven years. But now, if he’s going to play in the NBA, he realizes it’s now or never.

Along the way, there have been glory moments, like winning the Australian National Basketball League MVP and Sixth Player of the Year. But all of those took place oceans away from family and friends. He’s cherished his time overseas, but it’s a “sacrifice” for him, his wife, Patricia, and their three kids; Kyah, 4, Dre, 2, and Canon, 15 months.

“You miss all the holidays like Christmas,” Clarke said. “I mean we have our family here. Just feels like you’re missing something, kinda.”

Despite receiving offers from teams in higher divisions, Clarke has opted to play for Pallacanestro Mantovana, a team in Italy’s third division, for the past two seasons.

Because Pallacanestro Mantovana offered the most incentivized contract, including a free car, a microwave, an oven, and a washing and drying machine.

Clarke remembers having less money, in places where little English was spoken. Take Belgium, where he spent his second year overseas. Driving around Aalst, Clarke and his wife were taken aback by the Neoclassical architecture. Dropped off at their apartment, the couple ordered a pepperoni and sausage pizza from Pizza Hut.

“Just sitting in [the apartment], and thinking: Okay, what do we do now? We don’t have any food, where are we gonna go?”

Now, Clarke has racked up enough money to help pay off mortgages of the Italian apartment and a house he purchased in Fayetteville, Arkansas two summers ago.

Meanwhile, he has strayed further from his dream. He knows that dropping down the ranks will affect his reputation, making it “harder to get a job with one of the top leagues in a different country.”

Clarke’s clock is also ticking. He said his agent believes he can play six or seven more years. But he sees himself playing, at most, three or four years. Most likely, he will play “one or two more years, given they are good years.”

He still latches onto hope. Clarke trains twice a day, typically shooting 200 to 250 shots a day. He used to shoot 500 three-pointers and 250 free throws a day. Clarke would shoot more, but his body stops him. While the only major injury Clarke suffered was a stress fracture in his second year overseas, minor injuries are piling up. Sore knees. Tendonitis. Athlete’s foot. He supplants the lasting pain with four hot baths a day.

He plays through the pain. The other night, he dislocated the index finger on his left hand. So he popped it back into place. Taped it up. He wouldn’t come out of the game. Not yet. Clarke finished the game with 17 points and a season-high 29 the next game.

That’s the Rotnei Clarke Butler fans remember. There were the game-winners against Marquette in the Maui Invitational and Indiana in the Crossroads Classic, but Brendan King, former Butler sports announcer and Butler student from 2013-2017, recalls another sequence.

Against Dayton, in the 16th game, a trailing defender shoved Clarke as he was dribbling to the rim, causing him to crash headfirst into the back stand. On the ground, no sensation in his arms and legs, he declared, “I’m not coming out.”

He sat out the next three games, returning two weeks later. In his one season at Butler in 2013, the Arkansas transfer ended up averaging 16.9 points per game, before the Bulldogs lost in the round of 32.

“Guy was just a Butler player through-and-through,” King said. “He was the heartbeat of that team at times. He impacted Butler University in one year more than some could do in two or three. His toughness set the tone for future Butler teams.”

Clarke knows he is in the twilight of his career, but still wonders whether he could come out of the game short of reaching the NBA.

“I still think that’s always a goal to play in the NBA,” Clarke said. “Whether that’s being called up for a couple of games, or whatever the case may be.”

When Clarke graduated from Butler, he landed tryouts with the Pacers, Mavericks, and Wizards. A few G-League teams offered him a contract, but he instead chose Australia, where the pay was higher. In hindsight, he calls that decision his “biggest regret” because it was before he had a wife and four kids.

“I go back and think about that every now and then,” Clarke said.

In the tryout, Clarke impressed Thunder executives, who offered him a second tryout come September, this time with Thunder players. But since Clarke was bound by a contract with his Pallacanestro Mantovana, it was a risk: if he tried out and didn’t make it, he’d have no contract.

His contract expires next summer. Clarke hints at receiving another G-League tryout.

“Who knows? Clarke said. “Maybe I’ll end up in the next year or two trying in the G-League? And maybe get a call-up.”

In seventh grade, Clarke jotted down his ultimate goal in an essay in Ms. Willis’ English class: make the NBA. But while Clarke used to pursue his dream solely for himself, he does so now with family in mind.

“Hopefully if I’m playing for another couple of years, [my kids] remember seeing me play,” Clarke said.

Though he still has eyes on his dream, he understands it may never come to fruition. It will be a “crazy, weird feeling” when he does hang up the shoes, but he’ll cherish the memories.

“The pictures we keep, just all the things we’ll remember for a lifetime,” Clarke said. “My daughter was born in the USA, but my son was born in Australia. My youngest son was born in Italy. It’s worth it. I think a lot of people my age with kids, once they get over here, they’d probably take what we’re doing in a heartbeat than a regular nine to five.”

Conventional wisdom says that when Clarke retires, he will stay in basketball.

Many of Clarke’s former teammates have taken to coaching — Woods, Khyle Marshall, Ronald Nored, and Emerson Kampen, to name a few. Plus, Clarke served as “guard director” at a camp in Bixby, Oklahoma last summer, developing jump-shots and providing individual workouts.

But part of Clarke feels burnt out. After all, his father, Conley Clarke started training him in fourth grade. Conley wanted to play division-one basketball, but he was slow, some called him “turtle.”

Growing up, Rotnei called himself “bubble boy.” His parents didn’t literally wrap him in bubble wrap, but it was close enough.

“When everybody was going to jump and off at the lake, jumping off 10 foot, 15-foot thing, we said, haha, you’re not going to get hurt,” Conley said. “We’re avid quail hunters and we wouldn’t let ever let him go because he may step in a hole and turn his ankle.”

Ankles, after all, were important come basketball season.

Patricia brings the kids to all of Clarke’s home games. The little ones don’t know what’s going on, but the middle child, Dre, has taken a liking to it. Every night, the little guy shoots jump-shot after jump-shot on the little tikes hoop in their living room, while Clarke swats away his shots. Clarke will encourage — not force — his kids to play basketball.

While his wife suggested that he train his kids, and his father asked him to coach one of his AAU teams, Clarke, himself, has different plans. When he retires, he wants to leave the game for a minute. Watch his kids play. Sit back. Be a fan. A dad. That’s why “Plan A” is pharmaceutical sales and “Plan B” is sports announcing.

“But I may just hate it and go back to basketball,” Clarke said.

Whether he likes it or not, basketball is fused into his life. Always has been. Always will be. But Clarke’s mindset has changed. This isn’t about him. Not anymore.

Clarke has to run. A child’s voice echoes from the bathroom, where Patricia is giving him a bath. It’s Dre, and he will want to take jump-shot after jump-shot until he’s tired.