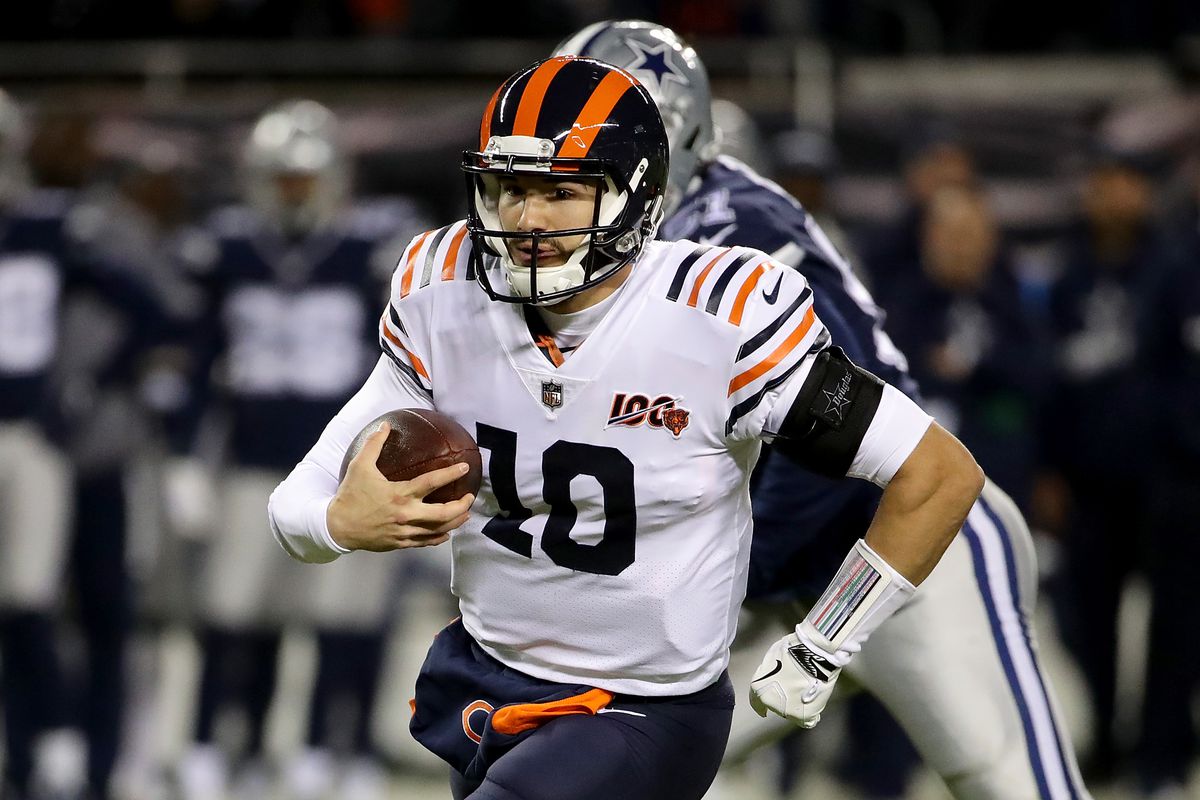 Mitch Trubisky runs the ball during a game against the Cowboys. The Bears drafted Trubisky with the second pick in the 2017 NFL Draft. Photo Courtesy of Jonathan Daniels / Getty Images.

Horrible. Disappointing. Disaster. No progression. Amazing. Not very good. Embarrassing. Time to tank. Brutal. Satisfied. Undefeated for the rest of the season.

These are some of the few phrases or words I’ve tweeted during Bears games due to a lack of consistency throughout this season.

I went from completely losing faith in the Bears and our quarterback Mitch Trubisky to thinking that we could possibly sneak into the playoffs.

After a heartbreaking ending to a promising 12-4 season last year, the Bears were poised to be Super Bowl contenders.

Bears fans everywhere hoped this would be the year that the former No. 2 overall pick would have a breakout season. The team had a new kicker, a more developed quarterback and ideally the same dominant defense that allowed the least amount of points per game in the league with 17.7.

The Bears even added some new weapons in David Montgomery, Cordalle Patterson and Riley Ridley. These three added to the offensive threats like Allen Robinson, Taylor Gabriel and Tarik Cohen.

After seeing Trubisky make his way to the Pro Bowl, most Bears fans assumed that the 2019 season was his chance to take the leap to the next level.

Instead, it seemed as though the 25-year-old was a rookie all over again. Trubisky made Bears fans worry every time he threw the ball past 10 yards.

You read that right. Five of our nine first games without a passing touchdown. If that doesn’t show how poorly he was playing, I don’t know what does.

He consistently missed open receivers and made poor decisions that most third-year quarterbacks would begin to make adjustments towards. After watching him through the first half of the season, it seemed as though he plateaued in terms of his skills. He couldn’t get the offense going in any type of way.

He’s had flashes, but they were just that: flashes. Trubisky has shown nothing that confirms he has potential to be a long-term solution for the Bears.

At the start of the season, all the signs pointed to an NFC North division title and a playoff run. But after an embarrassing loss under the Sunday Night Football lights against the Los Angeles Rams, Chicago found themselves slowly exiting playoff contention at 4-6.

Now what happened next, I can’t explain. It was like some switch flipped after the debacle with Chase Daniels and Trubisky’s alleged “hip injury” at the end of the Rams game.

Throughout the season, Trubisky struggled getting the ball down the field – being dead last in yards per pass attempt.

Trubisky has thrown the ball for over 240 yards just five times this season, which is disheartening as a Bears fan when fellow 2017 draftees Deshaun Watson and Patrick Mahomes, who were both on the board when Trubisky was drafted, average over that mark.

Over this three-game winning streak, Trubisky has thrown for an average of 287 yards per game, so he seems to be heading in the right direction.

Trubisky earned a trip to the Pro-Bowl partly because of his ability to be a dual-threat. He was fifth in quarterback rushing yards last year with 421 yards.

He has also shown he plays his best when he is mobile and outside of the pocket. But before the Bears matched up with the Cowboys, aka “America’s Team,” last Thursday, he totaled a measly 80 yards.

Trubisky contributed 63 yards on the ground along with a rushing touchdown Thursday night. He threw for 244 yards completing nearly 75% of his passes with three touchdowns and one interception.

If head coach Matt Nagy can keep up the play calling that kept the Cowboys’ defense on their toes, the Bears may have finally found the identity they have been looking for all season. The defense is still ranked top five in the league and would be ranked higher if they had help from the offense early in the season.

In the same breath, it might be too late for a playoff push.

After Minnesota beat Detroit to move on to 9-4 Sunday, the Bears will have to win the rest of their games if they hope to make a playoff run.

The Bears end their season off with two Division rivals in Green Bay and Minnesota and one of the best offenses in the league in Kansas City. It’s possible, but it won’t be a cake walk in any way.

Along with these wins, the Bears will need the Vikings to lose their other games against the Packers and the Chargers. The Rams will also have to lose two of their last three, which include games against the 49ers, Cowboys and Cardinals.

This will guarantee a wild card spot for the Bears regardless of who wins the NFC West between the 49ers and Seahawks.

The four-game losing streak a few weeks ago is coming back to haunt Trubisky and the Bears.

New Orleans beat us fair and square but the three losses against the Chargers, Raiders and the Eagles were all within our grasp. Not being able to close out those games hurts us, considering we’ll need all the help we can get if we want to make a trip to the playoffs.

Regardless, the Bears’ season is in the hands of Trubisky. If he can finish the season strong and continue his trend of playing the way Bears fans expected, I wouldn’t see a reason as to why we won’t be able to finish the season 10-6.

This is his chance to prove that he can be consistent as a quarterback. This is his opportunity to truly shut out his haters and rise to the challenge.

And trust me, after eight years of Jay Cutler under center, Bears fans deserve someone consistent.