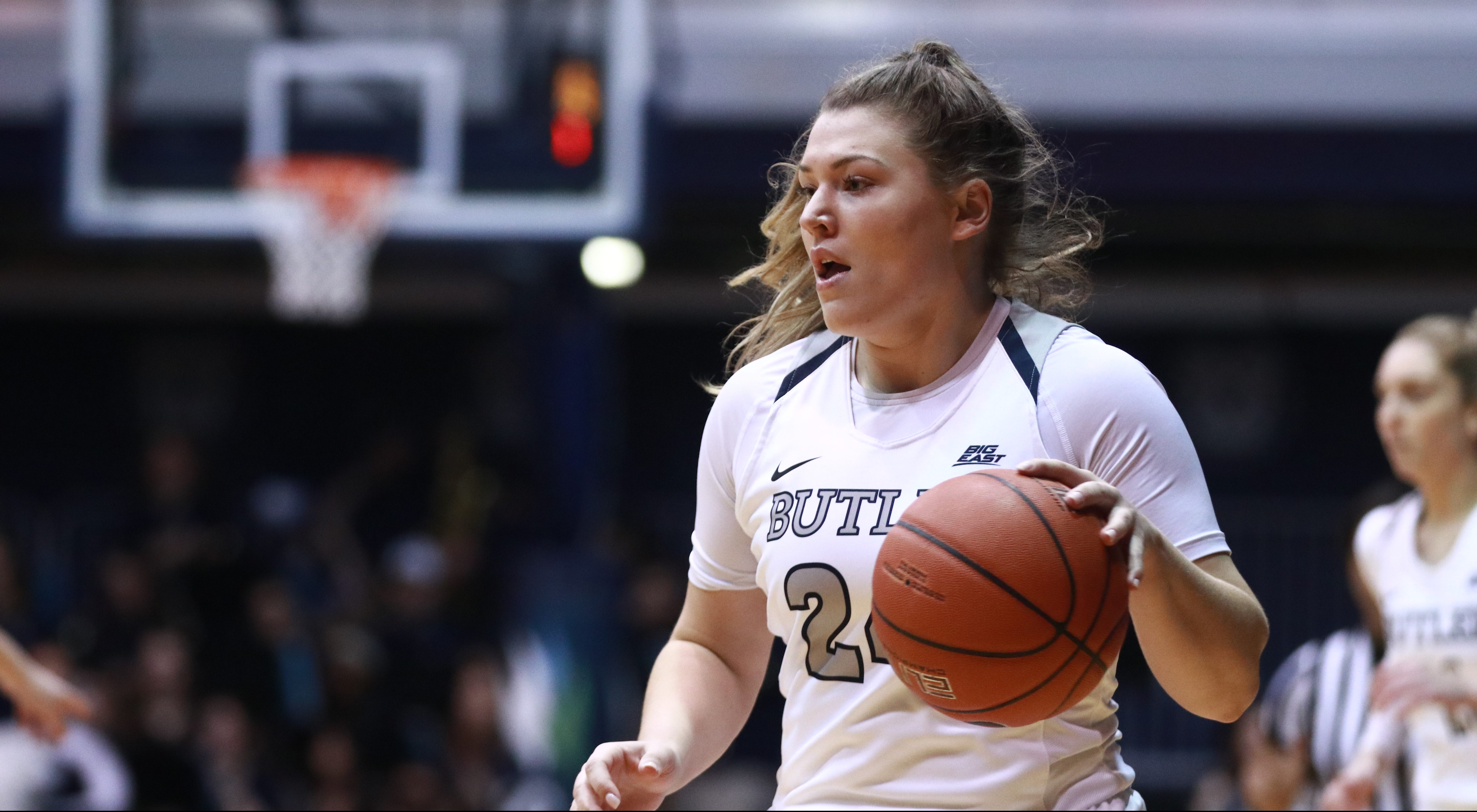 The Butler women’s basketball team maintained a majority of its roster but lost several key players from the 2018-19 season. This year’s roster features a mixture of returning pieces and new faces to fill the voids left by last year’s leaders. Here’s an inside look at the 2019-20 roster for the Bulldogs.

The three-star recruit out of high school appeared in 17 of the 33 games last season during her freshman year. Robinson finished off her high school career as the program’s all-time leader in points, rebounds, assists and steals.

Sexton averaged 6.4 minutes per game in the 22 games she appeared in last year for the Bulldogs. Sexton scored a season-high 11 points twice last season, against Western Illinois on 11/17 and Marquette on 1/27, and went 6-for-10 from downtown during those two games. Her shooting ability should be a big contribution to the offense this season.

Caceres played in all 33 games last season for Butler and averaged 4.8 points and 3.5 rebounds per contest. Before college, she played club basketball in Spain and her helped her team to three straight championships. She was also a member of Spain’s bronze medal winning FIBA 3×3 team at the World Championships. This experience should help the team as the season begins.

After spending two years at Penn State, Thomas appeared in just 12 games for the Bulldogs last year, averaging 4.2 points and 2.2 rebounds. Thomas averaged 10.8 minutes per game while shooting an efficient 54.4% from the field.

Humphrey appeared in 24 games for the Bulldogs during her junior year. She ended the year with 17 points, 22 rebounds, nine blocks, eight assists and six steals.

After transferring to Butler from VCU, Strong appeared in 20 games for the Bulldogs and started 18 of them. Strong suffered a season-ending injury against Marquette on Jan. 27 and is primed for a comeback season. She scored in double figures in six out of her last eight games prior to her injury.

Brey appeared in all 33 games for the Bulldogs last year, starting 13 of them. She was second on the team in rebounding with 5.5 boards per game. She scored 4.8 points per game on 54% from the field and 40% from beyond the arc. This efficiency could play a huge part for Butler as the season progresses.

Spoylar started all 33 games for Butler and was second in scoring for the Bulldogs with 13.2 points per game. She also managed to pull down 4.8 rebounds per game, which ranked third on the team. After last year’s leading scorer, Whitney Jennings, left, Spoylar is expected to take the leap as a leader for Butler.

The former team captain at her high school, Bishop Dwenger, played in 25 games and totaled 15 points, 14 rebounds and four assists in her freshman year at Butler. Ross averaged 16.8 points, nine rebounds, three assists, two steals and 1.6 blocks per game as a senior in high school.

Parker spent the last few years at Virginia Tech and Cincinnati before transferring to Butler last December. During her time with Cincinnati, she led the Bearcats to a win over Michigan State in the WNIT after scoring 30 points on an impressive 10-of-12 shooting. She also bounced around in high school, splitting her time at three different schools. Hopefully, she has found a home in Butler.

The Northwest Tech transfer started all 17 games for the Mavericks and averaged 24.1 points, 8.7 rebounds and four assists. During her time at Northwest Tech, she shot 37% from the field and 31% from beyond the arc. Flye should add another layer of scoring to the Bulldogs roster.

The high school standout led the Morton Lady Potters to three Illinois High School Class 3A state championships. In both 2018 and 2019, Dowell was an Associated Press First Team All-State selection and Illinois Basketball Coaches Association First Team All State selection. It’ll be interesting to see if her winning ways will translate to the collegiate level.

The four-star recruit is the all-time leading scorer at her high school, Kamiakin. During her junior year, she put up a double double by averaging 24.5 points, 10.6 rebounds, 3.8 steals, 2.5 assists and 1.4 blocks per game. Toure should be a nice addition for the Bulldogs depth for their roster.

The Clemson transfer spent two years with the Tigers before making her way to Indianapolis to play for Butler. She averaged 9.3 points and 4.6 rebounds in 23.1 minutes per contest during her final season at Clemson.

Before transferring to Butler, she dominated the National Junior College Athletic Association (NJCAA) by averaging 19.3 points, 3.8 rebounds and 2.3 assists per game during the regular season. She was an NJCAA All-Star and ranked as the 13th-best JUCO player by Collegiate Basketball Report. Atosu is a member of the Nigerian national team as well. Her addition should bring another level of experience to the table.