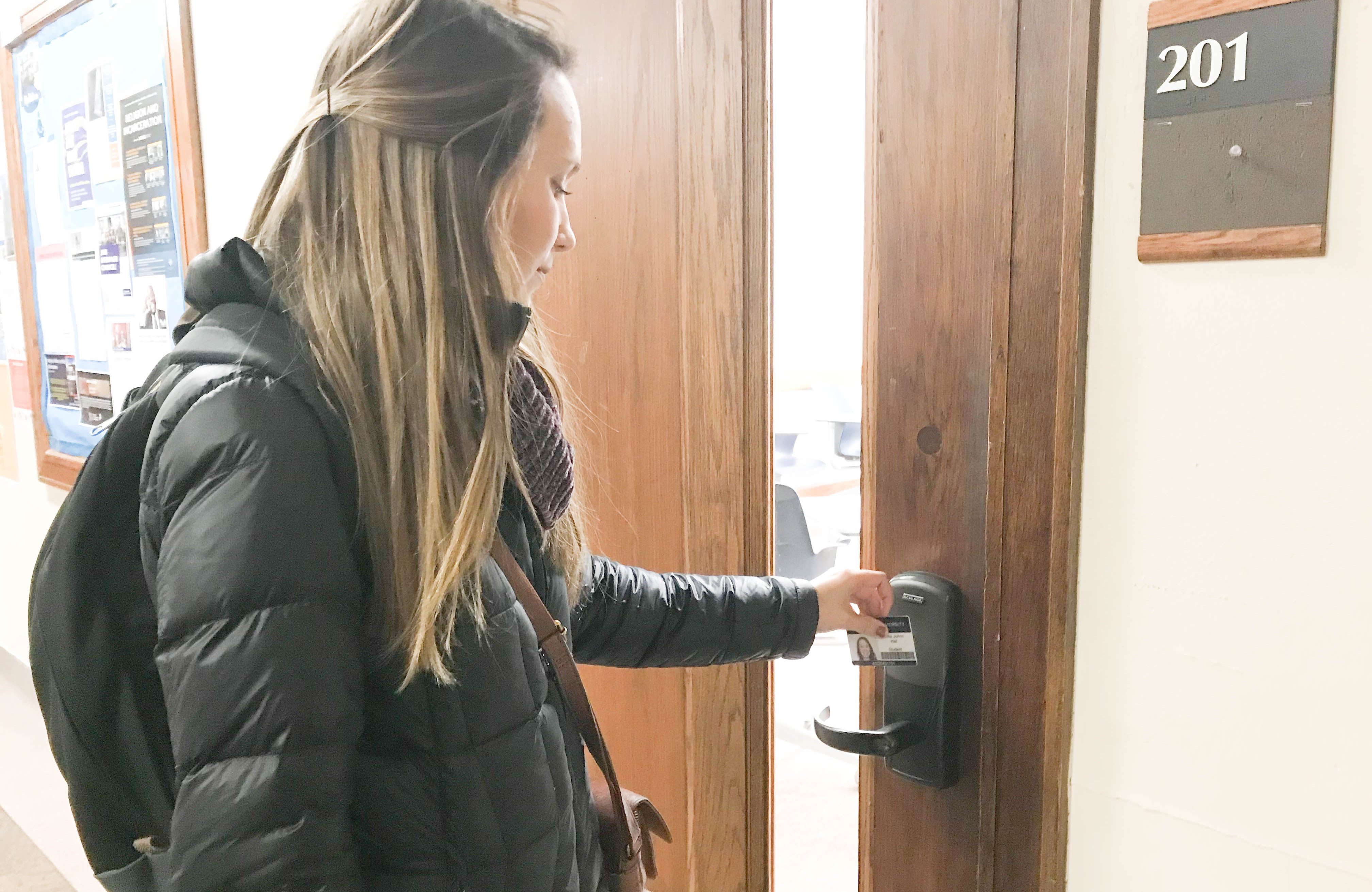 The Butler University Police Department hopes to have locks added inside all classroom doors by the end of this semester.

Since Spring 2018, BUPD has been working alongside Butler facilities and independent contractors to add locks to classrooms across campus. Locks were strategically added to the largest lecture halls such as Jordan Hall room 141 and Gallahue Hall room 107 first, followed by smaller classrooms and offices.

The type of lock greatly depends on the type of door. For doors with push bars a pin lock is used, while doors with ID scanners have a button inside that deactivates anyone from scanning in. Other doors have a lock that reads “locked” or “unlocked” from the inside.

“The whole objective here was for a class to be able to lock down from the inside,” Conley said. “Just by what we know about active intruders and how they operate…most of the time they look for the path of least resistance, and they’re not gonna spend a lot of time trying to pry their way in or kick their way in a locked door.”

With school shootings making national headlines, including the shooting at Northern Illinois University and one at Noblesville West Middle School, BUPD is becoming more mindful that this could be a reality.

“This year when the school year started, we had a couple of really horrific events happen across the country with active shooters,” Conley said. “It raised the awareness and concern among staff, faculty, and students, too.”

BUPD trains for many situations that could be encountered on campus.

Anthony Rivera, BUPD assistant chief of operations, said preparation is important, in particular, when it comes to active shooter training.

“Nobody ever wants it to happen, but it’s irresponsible not to train as if it could,” Rivera said. “You want to be able to have the best response possible to save as many lives as you can.”

Another one of BUPD’s projects has been placing new emergency response plan placards inside all of the classrooms.

“If you have an emergency and you go to that placard and you look at it, it’s too late,” Conley said. “Everybody needs to know what that says before an emergency, so I encourage everyone to look at the rooms they are in. Do they have a door lock yet? And if they do, do you know how to operate it? And what does the placard say?”

In the last 10 years, at least 180 school shootings have taken place in the United States, so other schools and universities seem to be making this switch as well. Sometimes when the locks are purchased, it takes a while for Butler to receive them because they are on backorder. The locks are on backorder due to high demand in recent years.

“Butler University is very in tune to what its needs are to protect its students,” Conley said. “Since I have been here in five years, I have never had push back from the university for spending any money for anything that protects our students and our staff.”

Some students were not aware that locks were being placed in classrooms. Senior biology major Drew Payton said this addition is exciting.

“It makes me feel safer and more secure knowing that the university has a plan in place,” Payton said.

“If a tornado is coming, the more walls that I can have between me and that tornado the better I am,” Betz said. “That’s the way you kinda gotta look at security, so all these components that build a good security program. It starts from card access, it starts with security cameras, it goes to even the locks.”

BUPD officers train year-round both on and off-campus, sometimes using unoccupied floors of Ross Hall as well as going to the shoot house at the State Academy in Plainfield. At the shoot house, they partake in simunition training, which puts the officers in a high stress situations, similar to that of a shooting, in order to help prepare them for a real life active shooter emergency.

Students with questions about the safety placards or door locks are encouraged to reach out to faculty. Any student groups interested active shooter training can talk to Betz to schedule a range of different trainings, depending on the organization’s needs.