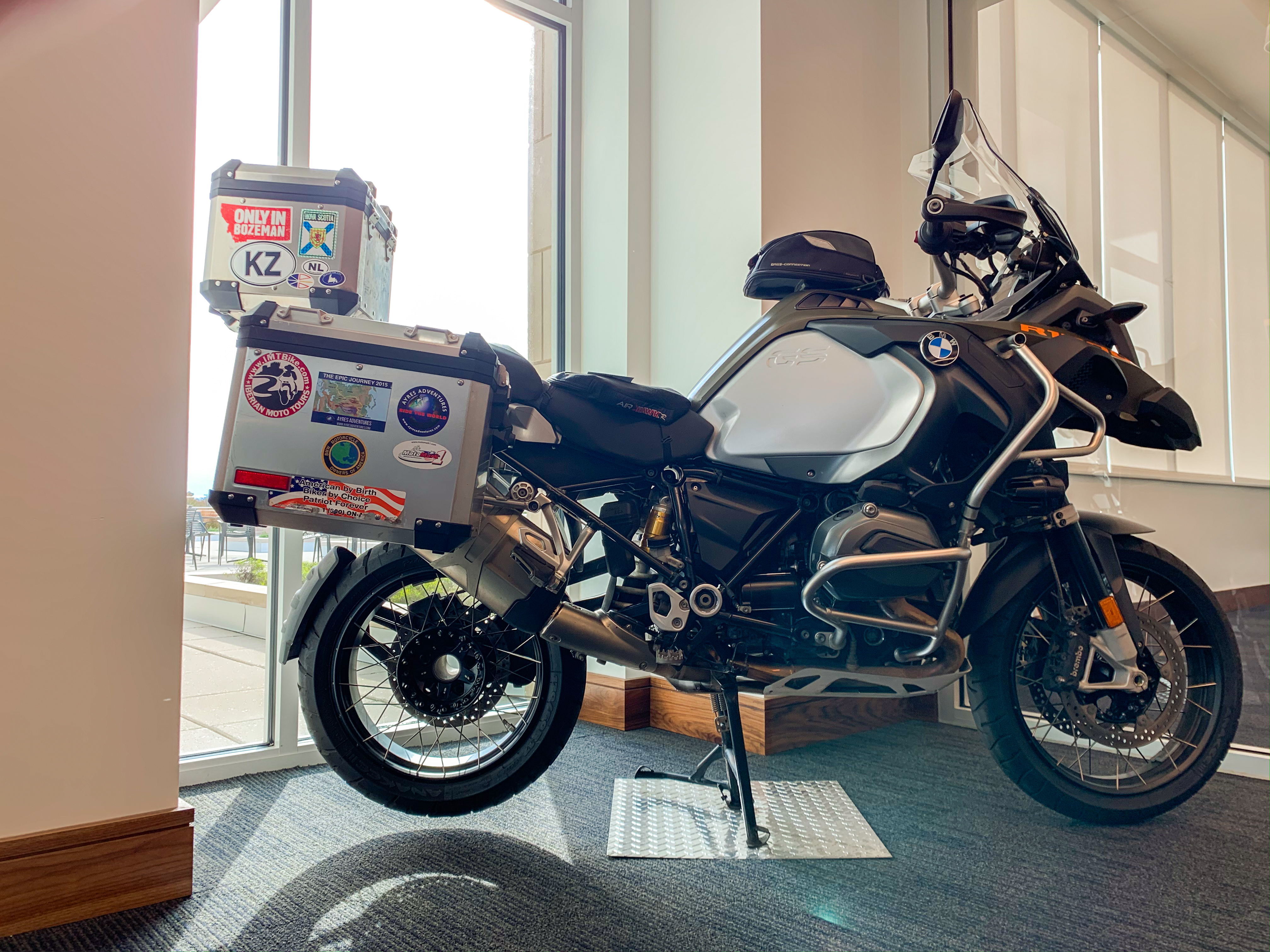 The motorcycle on display is an R1200GS Adventure. Photo by Xan Korman.

In August, Butler University honored Andre B. Lacy with a permanent display of one of his many motorcycles in the Dean’s Suite. It was donated by the family after Lacy passed away in 2017 while on a motorcycle ride in Africa.

Butler University wanted the display to commemorate Lacy’s love for adventure, and more importantly who he was as a person. They decided to place the motorcycle in the Dean’s Suite on the fourth floor of the Lacy School of Business building. It sits in the corner of the office lobby next to the windows and the conference room.

The motorcycle, an R1200GS Adventure, is used for touring and long-distance rides. One of the stickers on the motorcycle commemorates Lacy’s 2015 ride from Riga, Russia to Hong Kong, China.

The motorcycle is large and has silver compartments for storing luggage when traveling long distances. It is propped up so the back wheel hovers slightly off of the ground, and it faces the conference room with the giant handlebars angled towards it. The whole motorcycle is black, gray and silver with the name in bright orange across the front.

Craig Caldwell, associate dean of graduate and professional programs for LSB, said the motorcycle is a reminder of what an adventurer Lacy was, and how he was able to be a successful businessman as well as have time for his passions.

“It’s a bit of a nod to people’s potential,” Caldwell said. “To say, you really can do lots of stuff in your life.”

Caldwell said the motorcycle will serve as a way to continue to tell future students about who Lacy was and the impact he had on the business school. It adds to the character of the new building as well.

“This building is a unique structure on campus,” Caldwell said. “It’s more contemporary than a lot of the spaces around it. That motorcycle absolutely helps reinforce that message there’s something a little different about the building.”

Gina Lambert, a sophomore accounting and entrepreneurship major, said at first, she thought it was a little weird to have a motorcycle in the new business building. However after Lambert researched it, she learned the purpose behind the motorcycle.

“I got to learn a bit more about Andre Lacy,” Lambert said. “I think it’s cool they have that up there because you’re always reminded of it.”

Lambert said she had mixed feelings about the motorcycle.

“I think it’s a good way to visualize him,” Lambert said. “But, considering it’s a really nice motorcycle, maybe it’s not the best that it should be sitting on the fourth floor of the building for the rest of its life. It should be ridden.”

Caldwell said there were discussions of mounting the motorcycle on the wall of the new building, but ultimately, the logistics worked better for it to be displayed in the Dean’s Suite.

Jake Roberts, a senior risk management and insurance and finance major, said he has never seen the motorcycle.

“I know Andre Lacy was a big motorcycle guy, and I know that’s how he passed away,” Roberts said. “I think it just commemorates his memory and what he was passionate about.”

Roberts also said he thinks having a motorcycle in the building shows the direction that the campus has for the future.