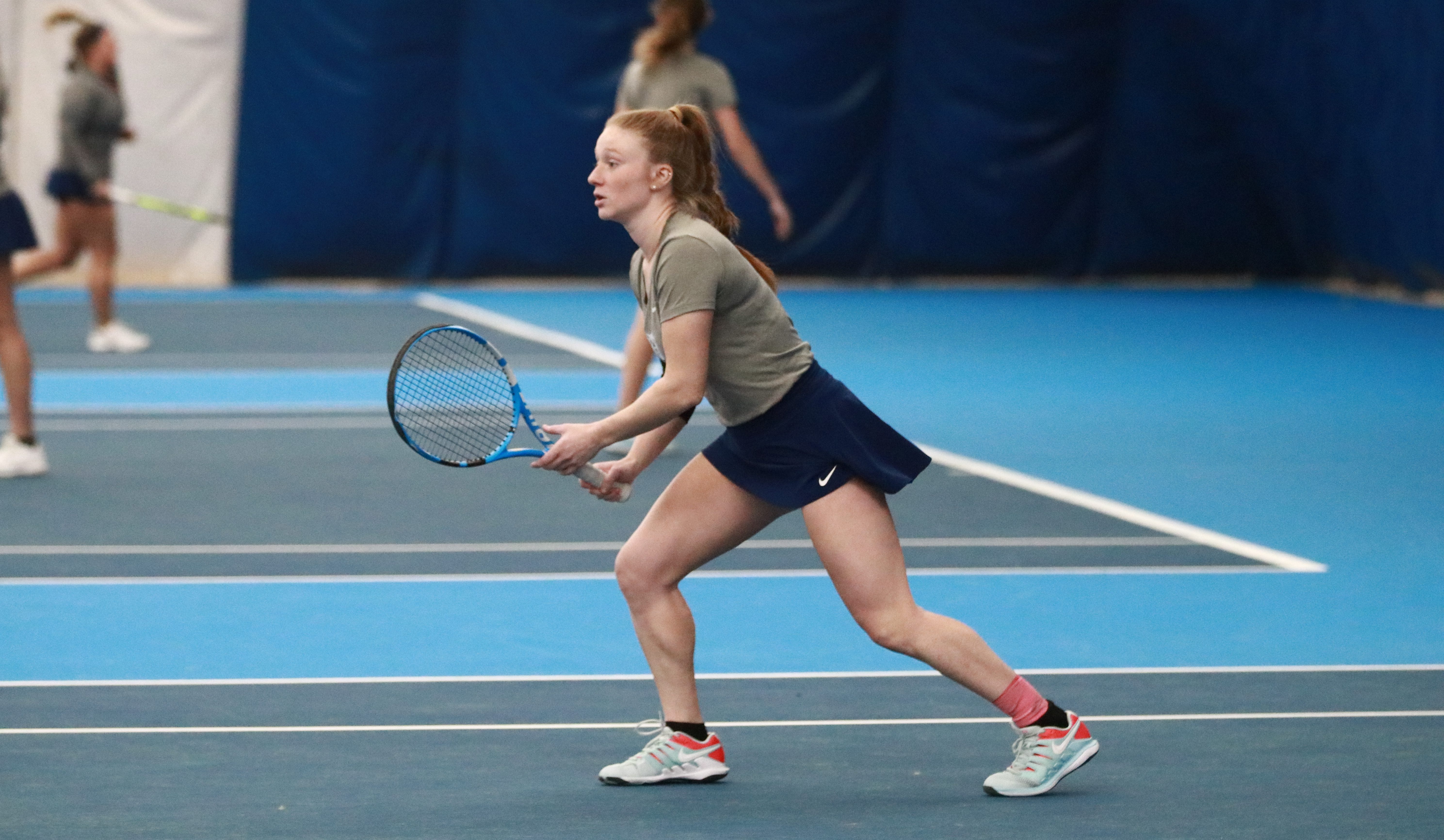 Sara Linn in action against IUPUI on March 1. Linn and the Butler women’s tennis team split four games over the weekend. Photo by Jimmy Lafakis.

Both the Butler men’s and women’s tennis teams saw action this past weekend, but it was the women who had the busier schedule. The men played one match against Cardinal Stritch on Friday, while the women hosted a total of four games over the course of the weekend.

The men started the month of March on a high note, shutting out the Wolves 7-0. The win moved them to 10-4 on the season and improved their winning streak to six games.

The Bulldogs battled hard for the doubles point, taking two of three sets. Adrian Mag and Aviv Ben Shabat won their No. 2 set by a score of 6-4. In the No. 3 slot, Thomas Brennan and Spencer Lang clinched the point by sealing a 7-6 win over their opponents.

Butler would dominate singles play. Brennan would get the first set victory with a win over Jose Chamba 6-2, 6-2. Ben Shabat would follow it up with a 6-3, 6-3, win in his matchup. The success of Mason Dragos continued as he took down Agustin Gascia 6-3, 6-3. The Bulldogs continued to win consecutive sets, with victories posted by Lang, Mag, and Ryan Roegner.

The men’s team will head to Clarksville, Tennessee, on March 13 to take on Austin Peay.

The women split a series of four games over the weekend. The first of those matches came Friday against IUPUI. While the Bulldogs lost the doubles point, falling in two of three sets, they bounced back in singles play.

An early match against DePauw was the first of two games on March 2. Butler swept the doubles point,winning sets by scores of 6-1, 6-3, and 7-6. Singles play opened with a strong win by Marx in two sets 6-3, 6-3. Bertino followed with a win after coming from behind. After losing the first set against Showalter 1-6, she posted consecutive 6-3 sets to win her matchup.

Hallie Leblebijian and Carla O’Byrne backed them up to seal the win for Butler 6-1 over DePauw and extending their win streak to five games.

The streak would not last long however, as the Bulldogs fell to Akron 7-0. In the battle for the doubles point, Butler won the opening set 6-1, but dropped the last two to miss out on the opportunity.

In singles, the Bulldogs were outmatched, losing 6 straight matches.

The women returned Sunday to take on Illinois State. Butler missed out on the doubles point after losing sets one and three. In set two, Bertino and Lauryn Padgett were deadlocked against Tara Damnjanovic and Natalia Bravo for the duration of the match, leading to a 5-5 tie.

In singles play the Bulldogs were unsuccessful at defeating that Cardinals players and lost in the No. 4, No. 1, and No. 2 slots. Butler ultimately fell to Illinois State 4-1.

After the weekend, the women are now 8-8 on the season. The team returns to action at Hanover College on March 16.