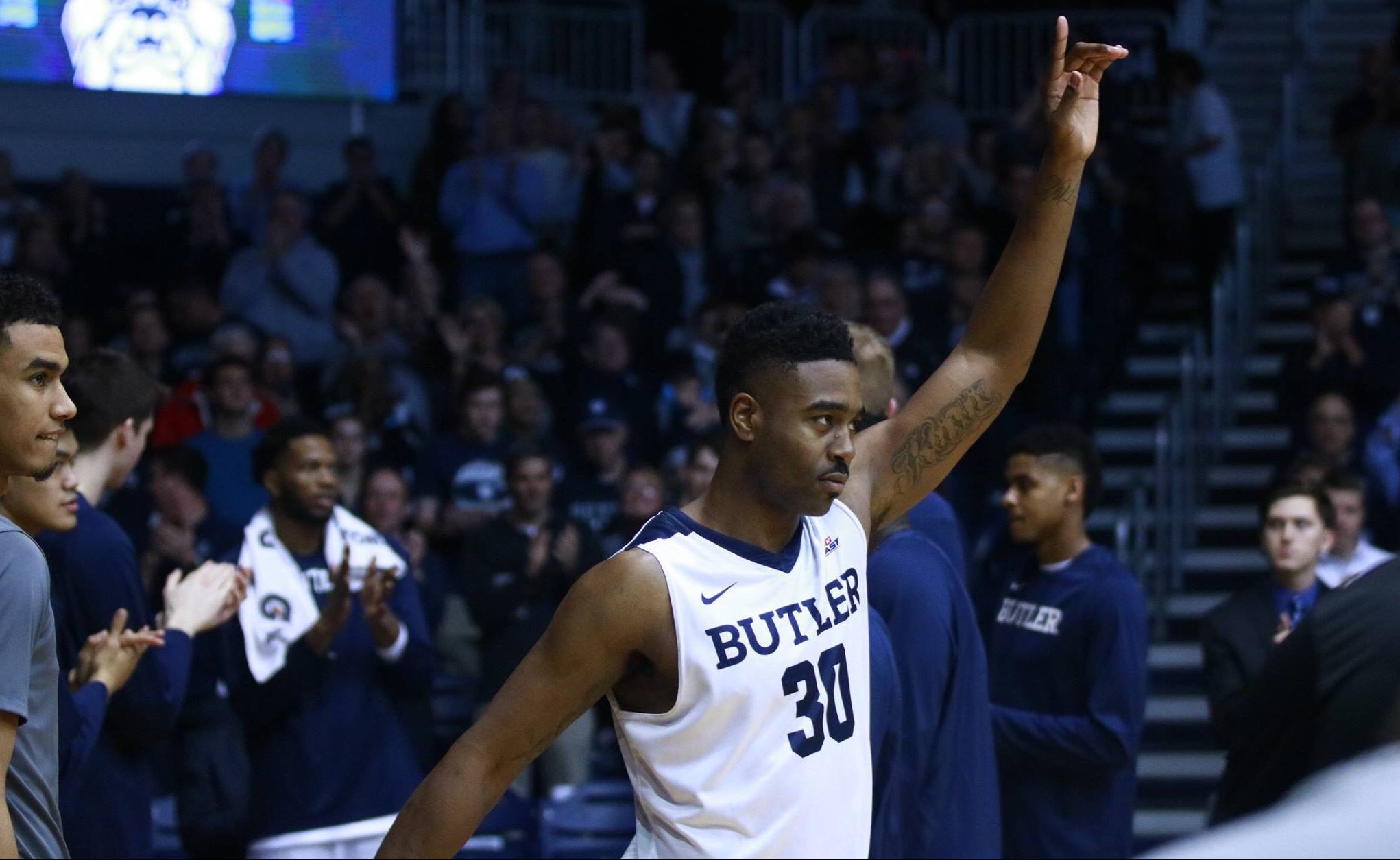 Kelan Martin waves to the crowd at Hinkle Fieldhouse during his last home game in a Butler uniform on Feb. 20, 2018. Martin is now playing for MHP Riesen Ludwigsberg in Germany. Jimmy Lafakis/Collegian file photo.

The sellout crowd of 9,100 bellowed through the night. An all-time Butler University men’s basketball great was back in town, and the Hinkle Fieldhouse faithful wanted to express their appreciation.

When Kelan Martin ‘18 returned to Hinkle last Saturday for the game against DePaul University, the fieldhouse vibe was akin to a rockstar returning to his roots. Dozens of Butler fans came up to greet the No. 2 all-time leading scorer in Butler history. After the 91-78 Bulldogs win, his former teammates reminisced and laughed about old times with Martin.

He even made an appearance on the big screen.

“A lot of memories came in my head when I walked into Hinkle,” Martin said. “Just me and my teammates having a lot of fun in practice and hearing the sellout crowds. It was a great experience sitting in the stands and watching my former teammates compete.”

The game marked Martin’s first time in Indianapolis in over six months. After working out for several NBA teams including the New York Knicks, Oklahoma City Thunder and Indiana Pacers, he went undrafted in the 2018 NBA Draft. Martin signed to play for the Utah Jazz in the NBA Summer League immediately following the draft. He averaged nearly eight points and four rebounds in seven games, split between the Utah Jazz and Las Vegas Summer Leagues in July.

After discussing his contract offers with his family and agent, Martin decided to take a leap of faith. He weighed potential NBA G League opportunities, but chose a more stable route overseas. He had only traveled to Europe once, back when the Bulldogs took their international trip to Spain in 2017.

Ludwigsberg is located in southwest Germany, close to the Germany-France border. The city has a population of over 93,000 people.

Martin, a Louisville, Kentucky, native, plays with several American teammates and plays for an American coach, John Patrick. The ties to his home country made adjusting to his new surroundings easier. Martin said Germany is not much different from America.

“Everyone speaks English, and I can communicate with a lot of people,” Martin said. “My teammates helped me get through the season by just guiding me and teaching me how to adjust to the lifestyle as a rookie and how overseas works.”

Although Ludwigsberg is six hours ahead of Indianapolis, he tunes into Butler games or highlights whenever he can. Sometimes, he watches the Bulldogs on his phone while traveling to his own games. But most nights, he enjoys a slice of home in his new residence — watching Butler games in his apartment.

When he’s not on the road, at practice or at weight training, Martin finds comfort in spending time with teammates and playing video games online with friends and old Big East foes. He is an avid NBA 2K player, and plays against close friend and former Seton Hall University guard Desi Rodriguez often.

Replacing the second-leading scorer in a storied basketball program’s history can be a tough task. What remains tougher, however, is filling the shoes of Martin’s leadership. Sophomore walk-on guard Campbell Donovan said Martin took him under his wing in their first team workout together.

A burgeoning friendship lifted after partner push-ups. That June 2017 workout blossomed into Donovan now referring to Martin a “brother” of his. The former Butler forward also developed strong relationships with Donovan’s parents, Sabrina and Rick. Win or lose, on the road or at home, they always took time to chat after Butler games.

“My parents and I are very thankful for someone who showed me how to do college the right way,” Donovan said. “Playing basketball and graduating in four years is a tough thing to do. For a man to go pro after doing all that, I think it’s pretty awesome. It shows you that hard work pays off.”

Martin learned how to mentor long ago. He also serves as a role model to his only sibling, his younger brother Kameron. The brothers are five years apart.

Kameron accompanied his older brother to the DePaul-Butler game, the first time the brothers had spent time together in six months. He is a first-year communications major at the University of Louisville and said his passions for broadcasting and photography were inspired by Kelan’s sports media degree.

“He has helped me by telling me to push through everything,” Kameron said. “No matter how hard something is when you start, always finish it.”

As Kameron learns how to navigate the sometimes treacherous college waters, Kelan takes his talents to the professional level. Through their trials and tribulations, they have strengthened their brotherly bond.

“It was difficult at first for me,” Kameron said. “I couldn’t just go over there to Germany. But I’m used to it now.”

Martin and his family have traveled across the globe because of a round, orange ball. But when that ball stops bouncing, his ability to inspire others will remain inflated.

After this season concludes, Martin plans to return to America and work toward another Summer League contract. After his basketball career concludes, his goal is to become a sports analyst.

Those deafening cheers at Hinkle encapsulated Martin’s legacy. He enjoyed taking in a game as a fan, and the experience reminded him of his life’s goal: establishing a career in the NBA.

As a Bulldog, he planted the seeds for success. Germany fertilizes them. Martin’s career isn’t done blooming yet.