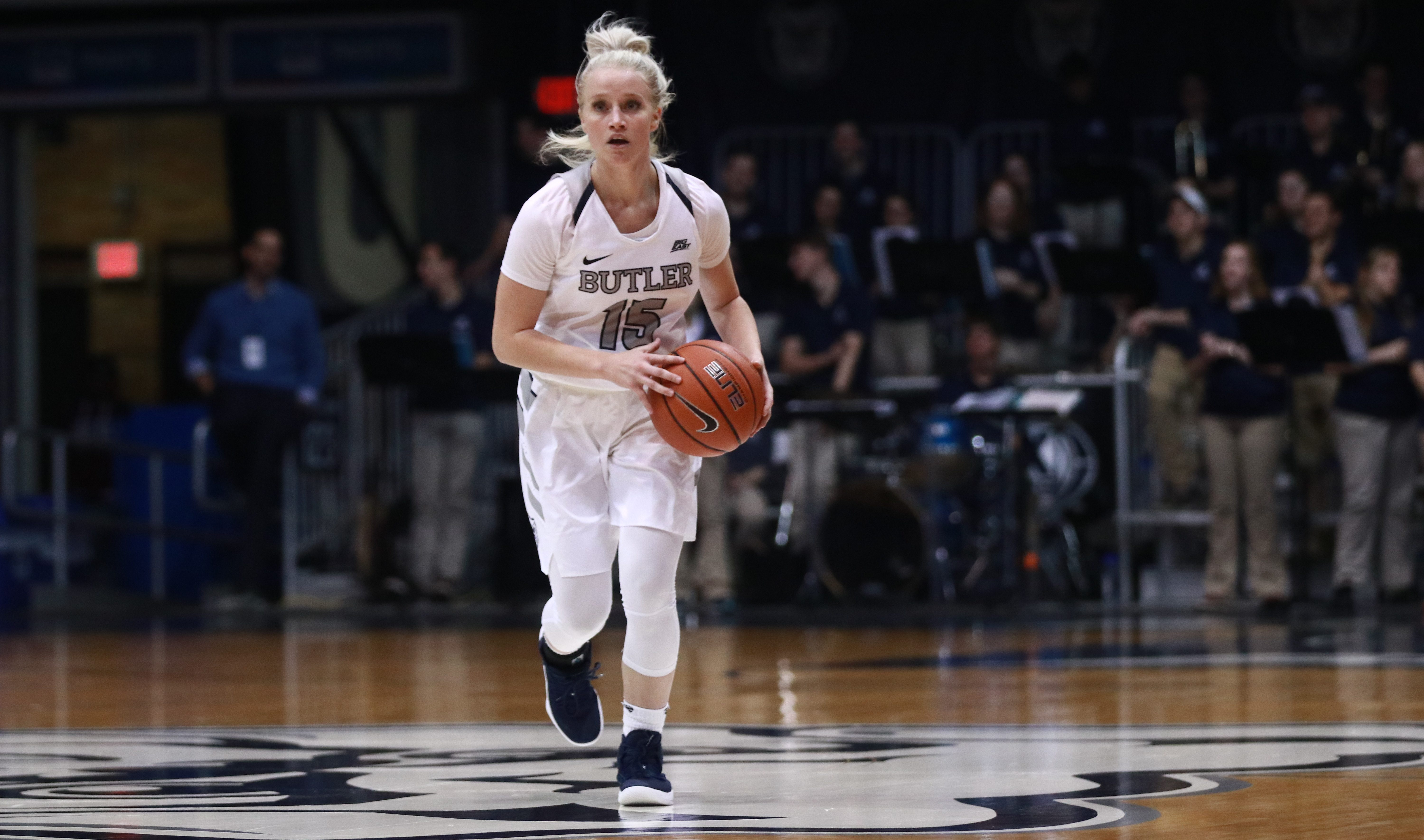 Whitney Jennings brings the ball down the court during a game this season. Jennings leads the Bulldogs in 3-point field goals this season. Jimmy Lafakis/Collegian file photo.

If you want to understand how the Butler women’s basketball team’s season is going, look no further than the last two games. Against Providence on Jan. 18, Butler lost their first game in Big East play, but not before lasting three overtimes and losing four starters to foul trouble. And in the last game versus fifth-place Creighton, Butler won 75-43, the team’s largest margin of victory in Big East play since joining the conference in 2013.

At 16-2 and 6-1 in conference, this is the best 18-game start to a season in Butler program history. Last season, the team ended 15-17 overall and 6-12 in conference. Two years ago, they were 6-25 overall and 2-16 in conference. Before this season’s success was an identity crisis.

Three transfers became eligible over the offseason, meaning the key players in place would have to undergo some sort of role change. Each player would have to share the ball more. The changes weren’t limited to offense, either. There was also an entirely new defense to grasp.

Ask coach Kurt Godlevske and he’ll attribute their success to one word: experience.

Butler lost only three seniors to graduation this offseason, and with eleven upperclassmen currently on the roster, they have the necessary experience to close the door on tight Big East games.

“We were so close in so many games last year that one of their mottos is that we finish,” Godlevske said. “That’s what they came up with because they felt like they had the same opportunity last year as this season, but they didn’t close out those games.”

Younger teams can struggle with grasping drastic changes, whereas an experienced team can actually leverage change to their advantage.

Butler’s scoring defense ranks fourth in the country and leads the Big East. The Bulldogs are holding opponents to just 52.1 points per game. In comparison, the next closest team is Georgetown, who averages 57.7 points per game.

What makes defense Butler’s calling card? This team is employing different defensive schemes from prior years. Before, they forced the ball to the middle, whereas now they force the ball to the baseline. Thus far, forcing baseline has worked because Butler uses the sideline as an extra defender, blocking the dribbler’s line of vision.

“We really changed our entire defensive scheme around from rotations to where we force the ball, which is something we’ve been practicing,” redshirt senior guard Whitney Jennings said. “It’s what we focus the most on defensively.”

Simply put, implementing change is the driver for Butler’s ability to wreak havoc defensively, as they lead the Big East in steals with 11.7 per game.

“We’ve really emphasized communication this year,” senior guard Michelle Weaver said. “It’s what makes us successful, everybody trusting each other, putting whatever they have on the defensive end and communicating.”

Another reason for the high steal total? Weaver, who is fourth in Division I in steals this season.

“[She does] the things you can’t teach,” Godlevske said. “She just has a real knack for knowing when to make the right play at the right time defensively. She’s become a defensive monster. She’s constantly changing the game with either deflections or getting steals.”

While the defensive side has been key to the team’s success, the offense has seen its fair share of roadblocks, none more significant than how defenses have taken to guarding senior forward Tori Schickel.

After a 63-41 win against Xavier on Jan. 11, Musketeers coach Brian Neal told Godlevske post-game that Schickel was Xavier’s number one priority. Heck, the only priority.

But double-teaming Schickel leaves other players open, such as Jennings, who leads the team in 3-point field goals. In the Xavier game, the senior guard splashed four triples on her way to 20 points.

Xavier is not the only team to swarm Schickel.

“It’s been game strategy, where it became a style as to who’s going to impose their will,” Godlevske said. “We’ve been really deliberate that we’re making sure we’re getting the right shot in the right situation. And because of the way teams are defending us we’ve had to be very specific in those areas.”

Of course, the double-teams coincide with a decrease in scoring for Schickel, from 16.4 points per game last year to 12.4 currently. Schickel’s ability to pass out of double-teams, though, has been commendable, involving Jennings as well as other players.

“They’re sending so many people at her trying to stop her,” Jennings said of Schickel. “We all just really benefit from that because if they’re sending two at her, that means somebody else is open. Tori and I have really been able to click well and we may not be scoring as much, but we don’t need to.”

The decision to double-team Schickel and the team’s added depth has proven to be a lethal combination to defenses. The scoring is distributed more evenly this season. Last season, four players — Jennings, Schickel, junior guard Kristen Spolyar and Weaver — accounted for 82 percent of the scoring, while this season, those same four players combine for only 69 percent of the scoring.

The main reason for the even scoring distribution is the addition of key transfers. Redshirt junior guard Katherine Strong has started 16 of 18 games, providing 7.2 points per game on 48.2 percent shooting. Last season, the Bulldogs lacked a secondary scorer in the backcourt, and this year, Strong has filled that role with vigor.

Redshirt sophomore guard/forward Naira Caceres, on the other hand, isn’t a scorer, averaging 3.8 points on 35.1 percent shooting. What she does well, though, is provide a mismatch to anyone defending her. Beating bigs off the bounce and posting smaller guards up, Caceres is a tough matchup off the pine.

Overall, winning has not only allowed the players to move freely on the court but also, and perhaps more importantly, spread contagious vibes throughout the locker room.

“The girls are able to let their guard down and be who they are, be a little freer,” Godlevske said. “We’re able to have a very positive player-coach relationship.”

By being committed to change and finishing what they started, the veterans have carried out their newfound motto and garnered success. And nearing a stretch run which buried them last season — from Jan. 26 to Feb. 11 they lost six in a row — that may be enough fuel for the engine.