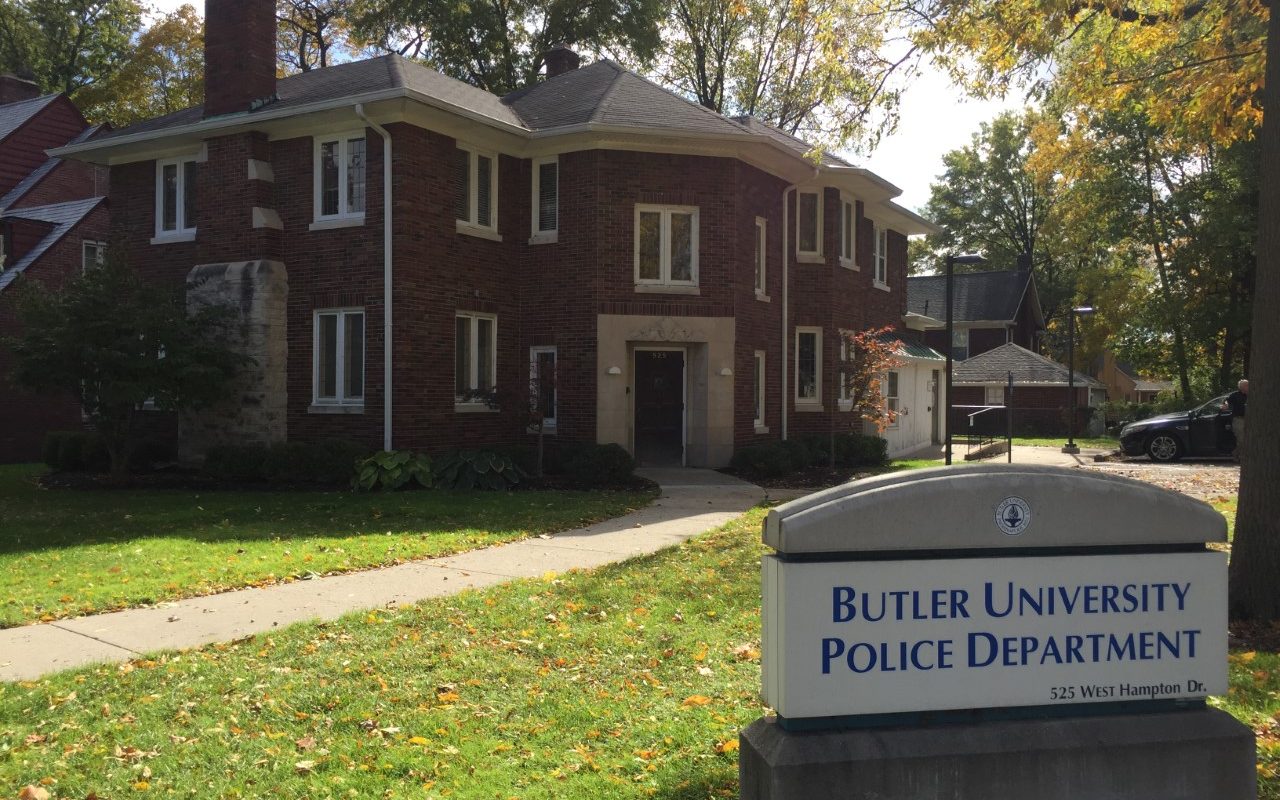 The Butler University Police Department, located on Hampton Drive and down the street from Butler’s Greek houses. Collegian file photo.

Every October, Butler University Police Department treats the student body to a little spook. Last year, it was a hush-hush armed robbery. You know, The One Where The Gunmen Got Away. This year’s trick-or-treat comes in the form of subtweeting the silly, terrorized girl who made the responsible decision of calling 911 when she believed she was being stalked.

Unless you live under a rock, or are blissfully ignorant of Butler’s glaring safety issues, you’ve heard several claims of cars following students, specifically women living on or near Greek Row, within the past month. It could be hearsay. It could be an urban legend. Or maybe the man taking pictures of sororities, then running to his car when confronted, is just a normal dude!

Perhaps a few thousand kids are fabricating stories. The running sedan parked in front of Greek Row for hours is likely just delivering Italian subs. Or so @ButlerUpolice assumes.

On Oct. 1, a professional law enforcer decided this would be the best way to notify @ButlerUpolice’s 6,500 followers of an unfounded threat:

“9:46 p.m. a Student reported running from a car that followed her from Atherton to her sorority (no verbal contact). Within 2-3 mins of the call, Officers located the vehicle based on the license plate. The driver was working for a delivery service, bringing food to a student.”

Accompanying the tweet was a photo of everyone’s favorite 2012 meme: KEEP CALM AND CARRY ON.

If you’re not familiar — again, how long have you been under that rock — with the saying, it’s a regurgitation of Winston Churchill’s reassurance to the British during World War II.

Years ago, it was reproduced as a corny meme and sold on things like cocktail napkins at Hallmark. It’s an old joke that was never very funny.

But tasteless image aside: a university police department publicly scoffed a woman for taking her safety seriously. Not a step in the right direction.

Things were looking up when “timely warning” was axed from the department’s terminology last year. Conley, who often takes the fall for his squad’s poor verbiage, bent over backwards to facilitate student-police communications.

Sure, this incident was a false alarm — hope everyone had a nice chuckle over at the station. Meanwhile, every kid on this campus is organizing walking buddy systems and bulk ordering pepper spray.

But we thank you for the bike locks and the excessive drinking tickets.

Oh, I hear the backlash now. “Come on, is one tweet really worthy of such vapid criticism?”

This problem didn’t begin with one unsavory tweet. On behalf of all Butler students, I ask, err, plead, that BUPD, as a whole, start taking the persistent concerns of its constituents for what they are — legitimate.

There is substantive evidence to our fears. There have been, and will be, those with criminal intent on this campus. The job of police, first and foremost, is to protect. If fear on this tiny campus is so heightened that students are terrified to walk half a block home, something is deeply wrong. I would prefer that this issue is prioritized before that of missing bicycles.

But just for giggles, let’s play devil’s advocate. Say there never was, and never has been, such a threat on Butler’s campus. Say it’s a peaceful haven, delineated from a charming 38th Street and a bustling downtown area. Ha ha.

Even in this world, it would be glaringly unacceptable for law enforcement to tweet, essentially: Hey, everyone, look at how paranoid this woman was — she thought an UberEats guy was capable of hurting her!

Still, we gag at the poor taste.

I’m sure the woman who called the department appreciates her situation being treated as a complete joke. I cannot speak on her behalf, but after such an experience, I think my expectations of BUPD — our first line of defense, as students — would be low, and my trust, zilch.

With a digital footprint like theirs, I hope for BUPD’s sake that nothing serious comes from such safety threats. Might leave a bad taste to remember the time a close-call case became publicly humorous.

Obviously, we’re being “vigilant,” and hey, isn’t that exactly what their poorly-worded emails advised us to do last year, when students were held at gunpoint? It doesn’t take our liberal arts critical thinking skills to realize that “Keep Calm and Carry On” is the antithesis of “see something, say something.”

How lucky we are that Butler-Tarkington offers the cheapest Halloween thrills in town! Lock your doors, cuddle up with “The Conjuring” and try not to scream when the HotBox guy rings your doorbell.

If @ButlerUpolice wants to crack jokes instead of cases, they should use a relevant meme.

Keep calm and creep on, stalkers.