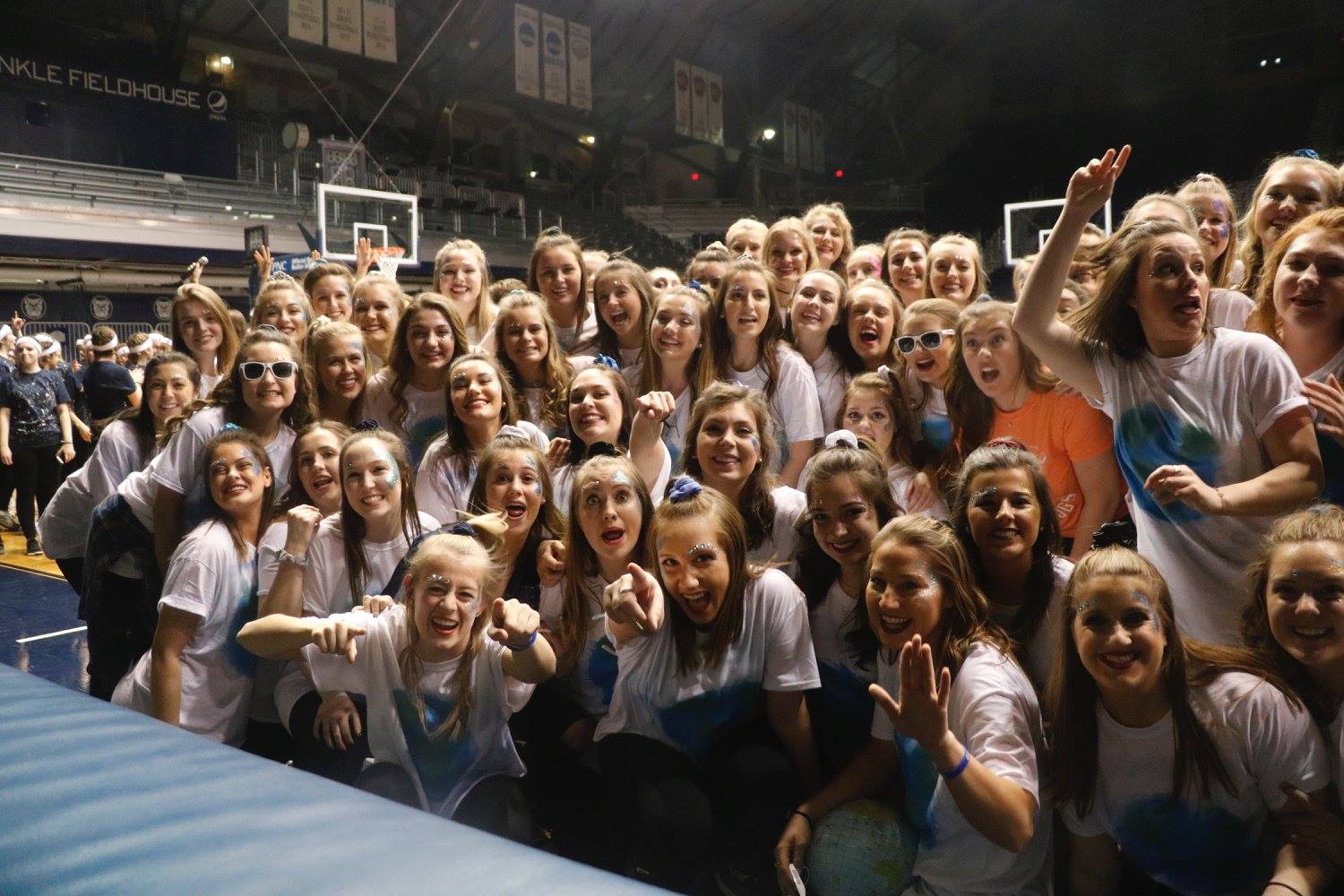 Members of Delta Gamma after they performed at First Year Skits in 2017. Photo by Jimmy Lafakis.

Bulldogs from several panhellenic organizations will lip-sync and dance in front of their peers in this year’s Spring Skits on April 19.

Formerly known as first-year skits, the event has been altered to no longer only include Greek houses in an attempt to bridge the gap between the Greek and independent communities on campus. However, no independent teams have registered to participate and three Greek houses, Kappa Kappa Gamma, Sigma Chi and Sigma Nu, have chosen not to participate.

Spring Skits will take place in Hinkle Fieldhouse and will feature groups of 15 to 60 people. Each group chose a story for their skit and several songs that represent it. The overall theme for this year’s Spring Skits is Dr. Seuss.

Skits usually last around 10 minutes, in which members will tell a story by lip-syncing and dancing. In addition, the story usually involves Butler University in one way or another. The event is sponsored by Blue Key Honor Society, a scholastic and activities honor society for juniors.

First-year skits violated several Greek organizations’ new member guidelines, as singling out new members could have been considered hazing. However, Blue Key has worked to reform the event to meet these guidelines.

One of the new rules states that teams participating in Spring Skits can but are not required to represent a student organization in good standing with the school. Before this year, only members of Greek organizations could make teams for first-year skits. Additionally, Greek houses must now have equal participation from new members and initiated members, as opposed to the previous rule of only including new members.

“We worked really closely with Becky Druetzler, our new advisor, and she helped us contact several Greek organizations to figure out new guidelines that would best suit their needs and new member policies,” Slagel said.

Blue Key sent out an email in February that told the presidents of Greek houses that the event would be postponed. The timing of the event created conflicts for three chapters.

Erin Gerity, the president of Kappa Kappa Gamma, said that the sorority decided it would not be able to provide adequate member representation to participate.

“In addition, we feel that sometimes we over-program our new members,” Gerity said in an email to the Collegian. “And since they already have a lot on their plate, we want them to be able to focus on their school work and take time for themselves. We are excited to support the other houses and still go to the event and see all the hard work the teams are putting in.”

Kyle Giebel is the president of Sigma Nu, one of the fraternities that is not registered to participate. In an email to the Collegian, Giebel said that the fraternity has other events and goals to focus on.

“With the uncertainty of having what is now known as Spring Skits, we planned our semester as if the event was not going to happen,” Giebel said.

Earlier this year, the fate of skits was in question because the Blue Key National Office no longer considered Butler’s chapter an active organization on campus. Butler’s chapter had not been recognized by the national office since 1997 due to a miscommunication on headquarters’ end, Slagel said.

“We didn’t know if we were going to be able to resolve that because it was going to be pretty expensive and didn’t know if our members would want to continue,” Slagel said. “But since then we’ve worked with headquarters and figured it out, so we will be an organization next year and this will not be our last event.”

This year, Blue Key wanted to make the event more inclusive by letting anyone make a team. Greek houses were never required to make a team, but it is tradition in many chapters. In order to market the event toward newly invited independents, Blue Key contacted the Independent Student Council executive board and put announcements in The Butler Connection.

Each team has several roles to fulfill, including captains and choreographers.

The team captain serves as the creative director as well as a liaison between event organizers and team members. Kylie Stine, a first-year marketing major, is one of the two team captains for Alpha Phi’s team.

“As captains, we had to attend the captains’ meeting, coordinate song suggestions, make a script, and make a calendar for practices,” Stine said. “I wanted to do something to show that I care about my pledge class, and the role has been cool but challenging, especially because the date is approaching so quickly.”

Alpha Phi has about 35 girls involved in their skit. The captains chose to split the girls into three groups; each group is to cover one song. Since the skit involves dancing, Stine sent out a survey to find out what level of dance each girl was comfortable with.

“Right now we’re still practicing individual portions,” Stine said. “But as it gets closer we’ll put all the groups together. Also I know because last year’s theme was Around the World, a lot of groups had the same ideas. I like how Dr. Seuss is really broad, and it sounds like we can incorporate lots of ideas.”

In addition, there are several rules for Spring Skits’ spectators. These rules include no drugs or alcohol, no backpacks and no storming the court.

In an email sent by the Blue Key Honor Society Executive Team, Spring Skits is advertised as a “campus wide, all inclusive, fun bonding event.” However, as of March 27, no independent teams have signed up to participate.

Butler’s Independent Student Council was re-formed on campus this year by newly elected SGA president Sam Varie. Rebecca VanVillet, junior marketing major, currently serves as the Interim President of ISC and spoke as to why there may be such little independent participation in Spring Skits.

“I think for this year just because of the timing, we didn’t have a ton of interest in Spring Skits, but now that it’s on our radar, we can really push it for future years,” VanVillet said.

Because anyone is able to make a team for Spring Skits, the ISC is excited about becoming part of this traditional and historic event on campus. However, both the ISC and Spring Skits are still growing on campus.

“We heard whisperings about maybe not having Spring Skits this year, I think all of campus was sort of buzzing with that,” VanVillet said. “Then we heard that they’re back on and more inclusive. Just the name being Spring Skits instead of freshman skits, I think is important.”

Spring Skits will be held on April 19 at Hinkle Fieldhouse at 8:30 p.m.