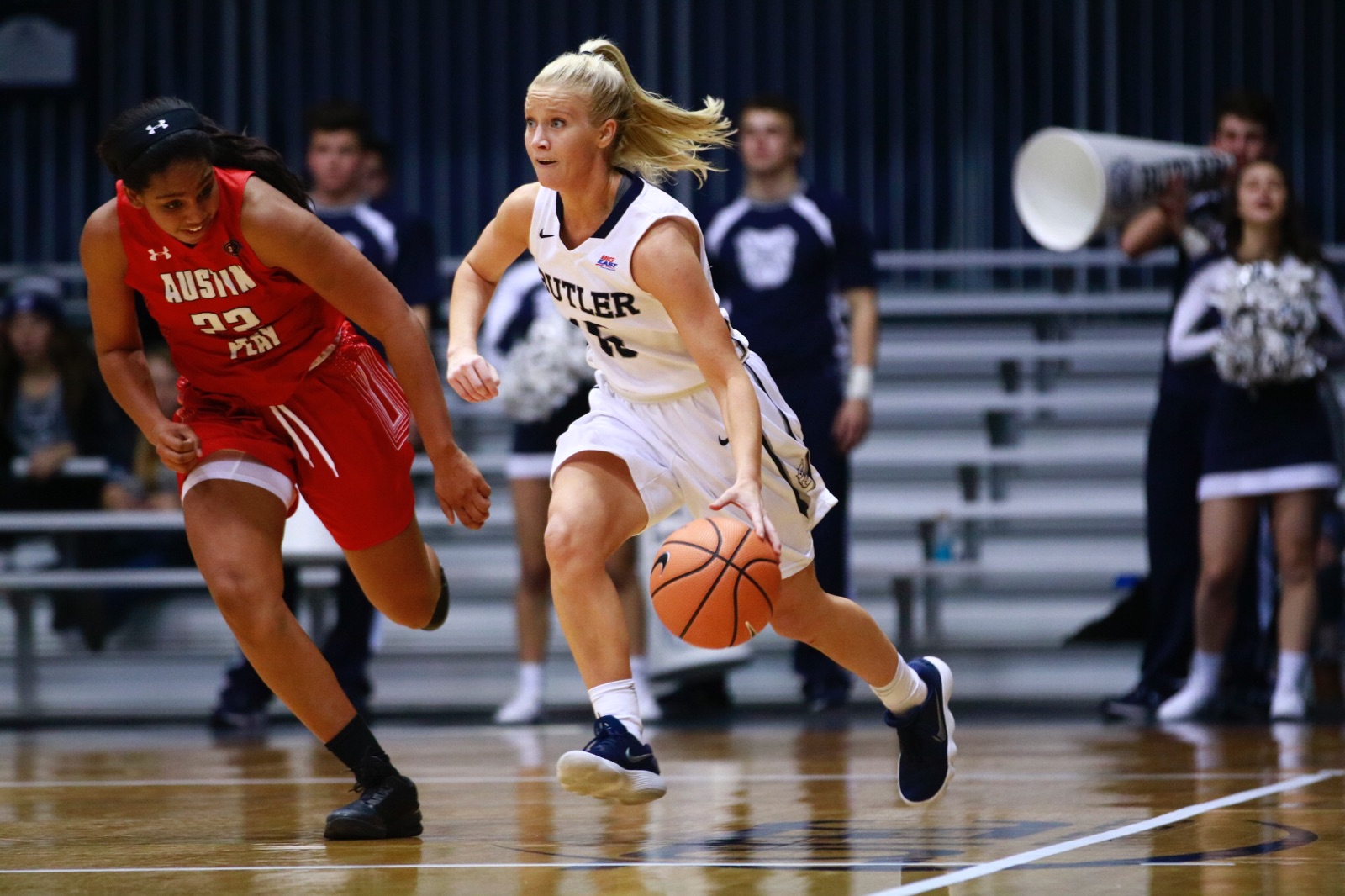 Whitney Jennings dribbles the ball down the court. Jennings is averaging a team-high 19.2 points per game. Collegian file photo.

The succession of 3-pointers and layups from West Virginia were all uncontested. Less than three minutes into the game, and Kurt Godlevske’s team was already down 10 points to the No. 11 ranked women’s college basketball program in the country.

“[They] battled back and just fought tooth and nail and scratched back to get into the ballgame,” Godlevske said.

With just over two minutes left, the Bulldogs led by one, an upset in sight to open the Paradise Jam Tournament. There was no upset victory. Not on that day. West Virginia pulled ahead in the final seconds to defeat Butler by seven points.

“We played really well against West Virginia and probably could have won that game,” Sydney Buck, a senior guard and Butler’s longest-tenured player, said. “Just a few breaks down the stretch didn’t go our way. But I think that was a game that we really played solid the whole way and showed that we can play with almost anyone.”

The upset would have to wait until the next day, when they beat the previously undefeated Virginia Tech with a last-second 3-pointer from sophomore guard Kristen Spolyar.

The program got off to a historic start this season, opening the year with three straight wins for the first time since 1990-91. And while the team has lost four of their last six games, it is a far cry from the types of 20-point deficits they were accumulating a year ago.

It was in those two games playing in the Paradise Jam that Godlevske realized how much progress the team has made since he took over the program less than four years ago. After joining the program as an assistant in 2013, Godlevske took over as head coach in 2014 following the school’s dismissal of Beth Couture.

Godlevske inherited a team that went 14-16 in his first season, setting a new high for the most wins by a first-year head coach in program history. But eventually, the inevitable happened, and as a number of players graduated, Godlevske was back to square one. He would add a total of 10 freshmen to the program in the next two seasons.

“Teaching [the younger players] how to play at the college level [and] building the program basically from the bottom up have been a process,” Godlevske said.

During those two seasons, Godlevske brought in his first recruiting classes and began introducing them to his system. Drawing from his experience as former head coach of Bedford North Lawrence High School, Godlevske recruited heavily within Indiana. Four of his first five recruits were in-state talent.

Not everyone stuck around. Five-star recruit Brittany Ward transferred mid-season to Dayton her sophomore year. Alexa Bailey, after battling chronic injuries during her time at Butler, transferred to Division II University of Indianapolis last summer.

The remaining recruits have developed into a major part of the team’s core, highlighted by Tori Schickel, whose 364 rebounds last season broke the Butler record for a single season.

His second recruiting class included former Indiana All-Stars Kristen Spolyar and Sydney Shelton, who are both key players for the team this year.

Now in his fourth season as head coach, Godlevske said he feels like the impact of his recruiting efforts is beginning to show.

“[It’s] kind of exciting to just finally feel like the program is mine because my kids are almost all finally here,” he said.

In addition to the players he brought in as first years, this year the team has also seen the impact of redshirt junior guard Whitney Jennings, who leads the team with 19.2 points per game after transferring from Iowa.

“I think some people probably look at us and say, ‘They’ve added Whitney Jennings and everything else is from the same team that won six games last year,’” Godlevske said. “But it’s also a maturation process. When you have young players, they’ve got to grow through some of those things and figure things out. Once they do that, things kind of take off.”

While there was not much roster turnover, the team gained an entirely new set of assistant coaches over the offseason.

“I think that the new coaches definitely bring a lot and that’s been helpful,” Buck said. “And that’s carried over into some of our new players. They bring a lot of energy. That carries over into games and we’ve been having some success with it.”

Voices are constantly ringing throughout the gym during team practices. It may seem like a small thing, but the players said the increase in communication is a reflection of their new energy.

“This year we’re constantly talking,” Schickel said. “If you’re ever in our practice, you know it’s loud. It’s a constant energy, and I think that’s something we didn’t have before and something that people didn’t push us to have. And we didn’t really know how to have it.”

Godlevske said the team just needs to continue to focus on what comes next.

“I think we’re at a crossroads, so to speak, early in the year where we start to grow now so that we get ready for Big East play,” he said. “But it’s still kind of early, I think, to say it’s going to go one way or the other. We’ve just got to continue to get better every day.”