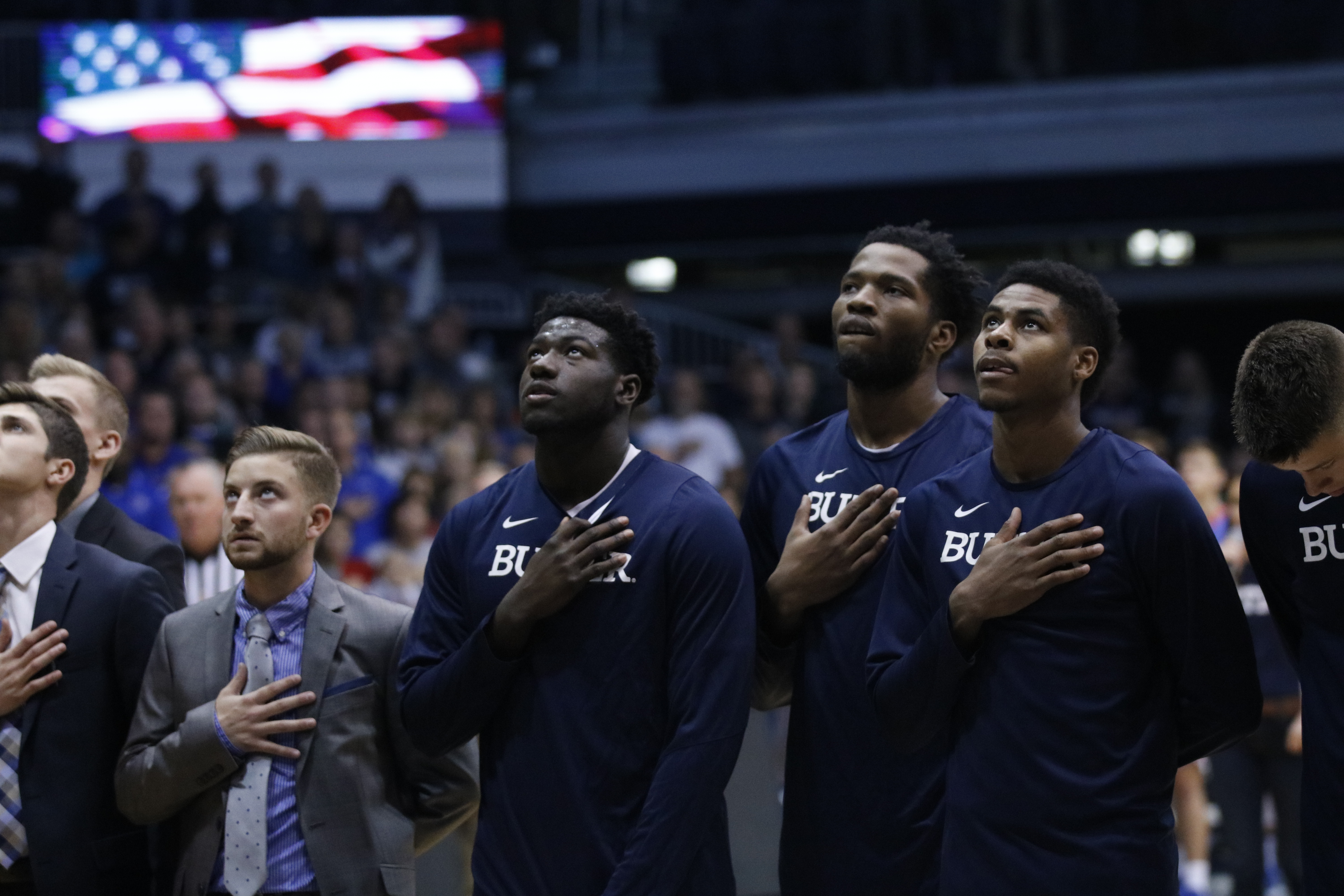 No pressure Coach Jordan, but anything less than a Sweet 16 run will be considered a disappoint in the eyes of fans. Tradition of surpassing preseason expectations means Butler fans expect to win, no matter what experts say about the so-called transition period. The magic of the “Butler Way,” is engrained in the school’s ability to win no matter who is at the helm. To watch this team lose behind the man and embodiment of the Butler Way would be bitter indeed. The challenging non-conference schedule will make or break Jordan’s credibility as a coach. If he can guide sophomore Kamar Baldwin through the position change to point guard and find a way to create offensive chemistry among veterans and new players, he’s got a job for the rest of his career.

The first year for any new head coach will be a year with some growing pains. Still, the team returns two star-studded seniors and a potential NBA draft sophomore. I expect the non-conference schedule to be somewhat rough, but the game at Maryland and the PK80 Tournament should prepare the Bulldogs for the long run in Big East play. Best case scenario would be an at-large NCAA tournament bid and a few upsets in the first two rounds to make back-to-back Sweet 16 appearances.

Anything less than an NCAA tournament appearance would be a disappointment. This team has the talent to be competitive in every Big East game, but could also end up with between eight and 10 conference losses. The tough non-conference schedule will pay huge dividends, both in terms of providing valuable experience and giving some cushion for the losses that are bound to come with this difficult of a schedule. While the overall record may not be great, Butler’s strength of schedule will secure a spot in the Big Dance. This team will go as far as Kelan Martin and Kamar Baldwin can take it.

This team is going to surprise a lot of people. That is the bottom line. There certainly are some question marks. The answers will reveal themselves in time. The Spain trip could not have come at a better time. The Bulldogs enjoyed 10 additional practices in the summer and used the overseas excursion to bond with each other. Butler will not finish eighth in the Big East, and the team will make the NCAA tournament. Kelan Martin will become a different beast this season. Watch the games. You will see what I mean. Butler fans will blast Future’s “March Madness” yet again this spring.

For a team that has a new head coach and new pieces, Butler is in a good spot. For starters, they have a tough non-conference schedule which will prepare them for a tough Big East and hopefully the NCAA tournament. The non-conference schedule will give the team some room to maneuver considering they will lose at least a handful of tough conference games. Second, nobody expects this team to do anything. Being picked eighth in the conference, the Bulldogs can quietly go about their business and surprise people like they do every year. This could be a team with as many as 13 losses or as a few as seven or eight. But a tough non-conference slate and overall strength of schedule will result in their name being called on Selection Sunday.

This is a team that will turn heads this season. The Bulldogs aren’t the sexy pick to win the Big East due to all the question marks they have. They have a new regime with head coach Lavall Jordan at the helm, and the new additions of transfer Paul Jorgenson and freshman point guard Aaron Thompson have a lot to prove. They also lost Avery Woodson, Kethan Savage and Tyler Lewis who were key components of the Sweet 16 run last season. I believe that this team finishes in the top three in the Big East. The Big East title is always closely contested. It will all come down to execution and making timely plays. Kamar Baldwin, Kelan Martin, Nate Fowler and Tyler Wideman will lead this team, but the emergence of Jorgenson and Thompson could make this team really special. We will see this team in the dance.

Butler basketball is going through a complete remodel. With a new head coach in LaVall Jordan, and five new faces on the roster, this team must figure out its identity early if they have any chance at succeeding in a competitive Big East conference. Fans should expect a team that runs fast, plays scrappy defense and pushes the tempo. With all the change that has occurred this offseason I would say anywhere from 4th to 6th in the Big East would be encouraging. If this team can find consistent scoring from senior forward Kelan Martin and sophomore guard Kamar Baldwin, there’s no doubt they have a chance at playing into March.

Following a bumpy offseason, new head coach LaVall Jordan and the team will have their work cut out for them this season. Preseason polls may reflect low expectations, but both the team and the fan base are fully expecting a continuation of the recent success. A challenging non-conference schedule will test the Bulldogs early, but should help prepare them for Big East play. I don’t expect as good of a record in conference play as last season, but with a strong strength of schedule on their side, I predict the Bulldogs will outperform preseason predictions and fight their way into the NCAA tournament. And we’ve certainly seen that anything can happen from there.