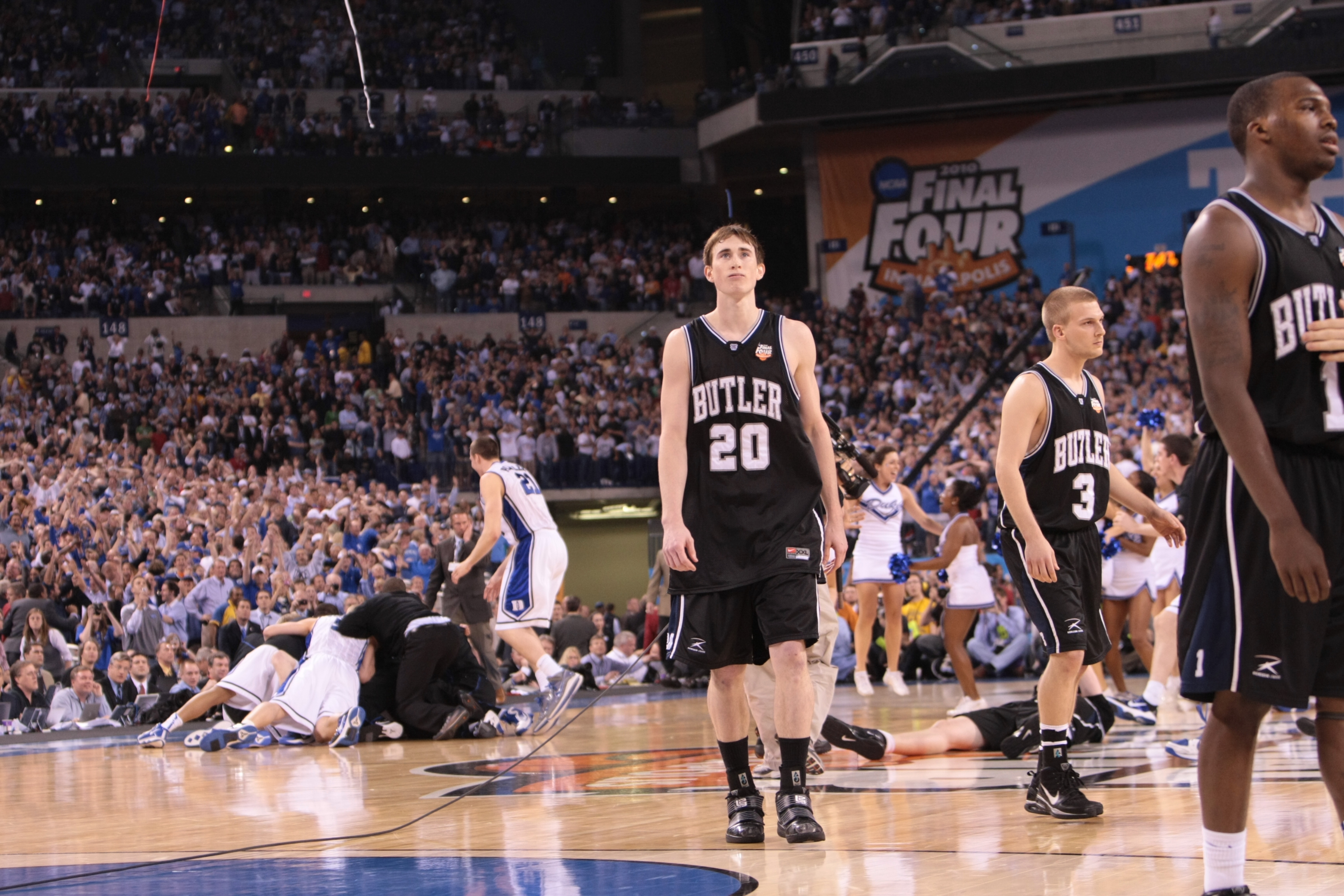 Gordon Hayward walks off the court after the Bulldogs lost the championship game to Duke on April 5, 2010. Collegian file photo.

Butler University has one of the most storied men’s basketball programs in the country. History runs throughout the nearly 80 year old Hinkle Fieldhouse, with stories of triumph and glory covering the walls of the landmark stadium. Throughout the years, Butler basketball fans have seen a number of different uniforms worn by Indianapolis’s beloved Bulldogs. In anticipation of the upcoming regular season, this will be a countdown of the best uniforms worn in Butler History.

To start the top five we have the most recent Bulldogs jersey to be released. The gray alternates were added to the Bulldogs wardrobe last season and included a number of unique features. On the back of the jersey there is an outline of Hinkle Fieldhouse along with the most recent Bulldog logo. Butler had such a long streak of plain jerseys, it was good to see a different look. Hopefully, this is just the first of the new uniforms that the team may be rolling out in the next few seasons. Unfortunately, this particular look did not last. This season Butler will still be wearing the black and blue versions of this jersey, but the gray jerseys will stay in the closets this season.

The Butler men’s basketball team photo of the 1973-74 season. Photo courtesy of “The Drift” Butler yearbook.

The pinstriped uniforms were worn by Butler players for a number of years. Butler Athletics Hall-of-Famers Daryl Mason and Wayne Burris were two of the members of the 1973-74 squad that had a record of 14-12. These uniforms were a little different from the jerseys of the past decade. Instead of a dark navy, these uniforms were a bright, royal blue. The away white uniforms had the same pinstripe design on the shorts and the same jersey.

A complete mix-up from the typical Butler jersey, the 1975-76 uniforms include a vintage Bulldog logo. This is one of the only designs I found that did not feature the school name on the uniforms at all. Instead, the logo appeared in the top right corner, with the number in the middle. This team also featured a familiar Butler face. Barry Collier, current Butler athletic director and former men’s basketball head coach, also played for the Bulldogs for two seasons. Collier graduated in 1977 only to return to the school 12 years later as the team’s head coach in 1989. If I were to make a suggestion to the athletic department, I would recommend a new throwback uniform based on this design. This alternative design combined with the original Bulldog logo make the uniforms interesting and unique.

Next up is the uniform worn by the 1999-2000 Butler team that earned a bid to the 2000 NCAA tournament thanks to the combined efforts of three Butler greats. Current head coach LaVall Jordan, guard Andrew Graves and the late Joel Cornette were all members of this historic team. These jerseys are designed like the typical Butler ensemble, except there is a line going through the middle of the numbers, giving the jersey a sharp look.  These uniforms also have a unique color palette. The main color is black instead of the usual navy blue. This look unfortunately lasted only a short time, as the team moved on to a different look that would eventually lead them to the brink of history.

On April 5th 2010, the Bulldogs lost to the Duke University Blue Devils in the national championship game. With seconds remaining, Butler forward Gordon Hayward launched a half court shot that could have won the Bulldogs the title. That shot missed by a matter of inches, and even though the Bulldogs lost the impact of that shot would be felt all throughout Butler’s Sunset avenue campus. That shot put Butler University and it basketball team on the map.

The uniforms worn that night are the greatest uniforms in Butler basketball history. Not necessarily because they are the best look, but because they are associated with some of the best Butler players of all time. Gordon Hayward, Shelvin Mack and Matt Howard all threw on this uniform and wore it straight to the final four. This jersey is emblem of the golden age of Butler Basketball, the most successful stretch that has ever occurred for the storied program.

The iconic black uniform came with several interesting features including a bulldog logo at the base of the neckline as well as on the left side of the shorts. On the opposite side of the shorts was the player’s jersey number, a style rarely used in college basketball game uniforms. This look may not be the most fashionable or stylistic, but this is the look that put Butler on the map, and that is why it rounds off the countdown as the number one Butler uniform of all time.