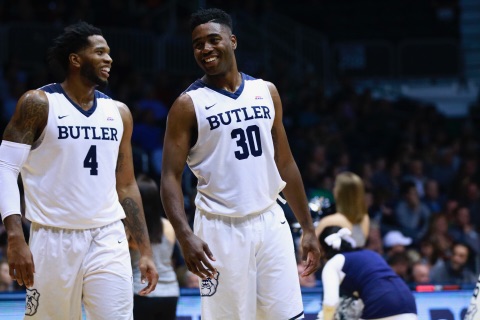 Seniors Tyler Wideman and Kelan Martin are all smiles during Butler’s 82-64 win over Kennesaw State on Nov. 10. Wideman tallied 13 points while Martin led the team with 20. Photo by Jimmy Lafakis.

The LaVall Jordan era at Butler began with a bang in the Bulldog’s 82-64 win over Kennesaw State University on Nov. 10.

The Bulldog offense exploded in the opening minutes, beginning the game on a 20-4 run. Senior forward Kelan Martin capped off the run with his second three of the game. The Bulldogs scored seven of those 20 points off of Kennesaw State turnovers forced by the Butler defense.

“Our guys did a great job out of the gates in the opening six or seven minutes of the game,” Jordan said. “Energy, focus was at a high level. Guys were communicating well. Offensively, we were able to get out on a break and run a little bit.”

Kelan Martin leads the Bulldogs with 12 points and six rebounds at the half #GoDawgs pic.twitter.com/EuFuwXxWQ4

While the game looked to be over with Butler leading by 22 in the opening eight minutes, a strong showing by the Owls and a poor shooting streak to begin the second half by the Bulldogs made it a 10 point game with 12 minutes left. The Owls were led in this run by guard ames Scott, who scored 22 second half points to finish with 26.

“In the second half, they [Kennesaw State] got in a rhythm,” Jordan said. “And we didn’t do enough in that moment to break their rhythm to make them uncomfortable.”

Butler responded with a 12-3 run over the following six minutes to give the Bulldogs a 69-50 lead with just under seven minutes left. Sophomore guard Kamar Baldwin contributed to some of that run after not scoring in the first half. Baldwin finished the game with just seven points after picking up three fouls in the first half.

The Bulldogs would ride that final push to the final buzzer for an 18 point victory.

While Jordan and the rest of the Bulldogs have been preaching the high-paced offense, the defensive end is what produced the early run. The Bulldogs outscored the Owls 22-2 off of turnovers in the first half. Also, the Bulldogs finished the game outscoring Kennesaw State 12-4 in fast break points.

Free throws were a struggle for both teams, particularly for Butler. The Bulldogs finished just 12-23 from the line at 52 percent. Though it did not hurt Butler on the scoreboard, it is an area that was one of their strengths last year. The Bulldogs shot 74 percent on the season from the free throw line a year ago.

Another rough area for the Bulldogs was three-point shooting in the second half. Butler finished 1-12 from three in the final 20 minutes. Starting redshirt sophomore guard Sean McDermott went 0-3 from behind the arc, while Baldwin went 1-4 and Jorgensen went 1-4 from distance, respectively.

Butler has a quick turnaround to prepare for their next game. They are back in action against Princeton University at Hinkle Fieldhouse on Nov. 12 at 6 p.m. The game will air on the CBS Sports Network.

“We just focus on the task at hand,” Jordan said. “Now we’ll move on. And it will be a little like a tournament setting. You win on a Thursday, and you only have one day in between. So guys will have to lock-in.”