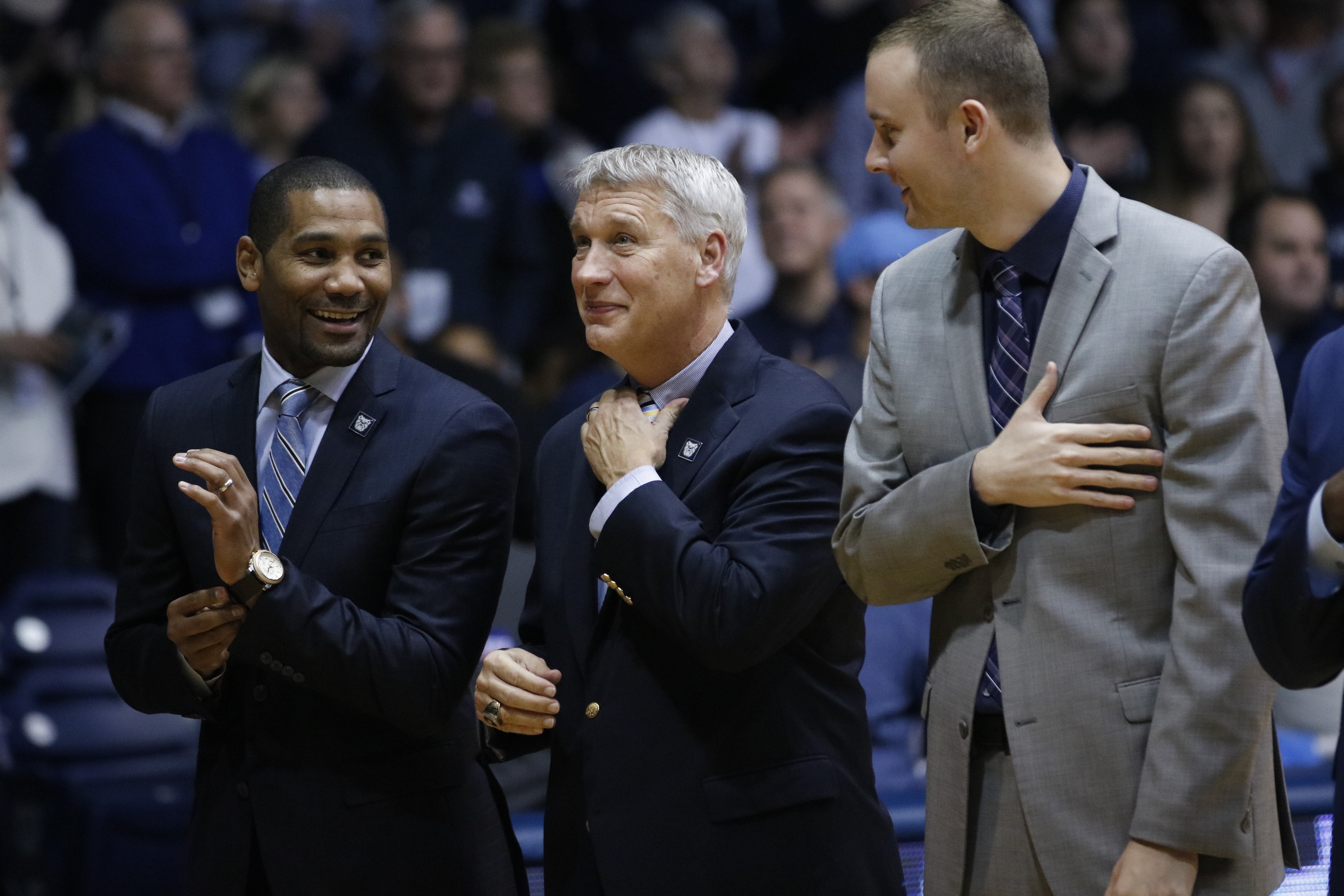 Emerson Kampen, Jeff Meyer and Omar Lowery comprise the men’s basketball assistant coaching staff. Butler’s previous assistants left for Ohio State University in June along with former head coach Chris Holtmann. Kampen graduated from Butler in 2013 and has served as the basketball analyst for the past two seasons. Meyer served as a Butler assistant coach for three seasons (2001-04) and worked as an assistant with head coach LaVall Jordan at the University of Michigan. Meyer has been a college coach for 38 seasons. Lowery spent the 2016-17 season with Jordan at the University of Wisconsin-Milwaukee.

The Butler Collegian: What’s your favorite part about Butler basketball?

Emerson Kampen: The people. I think we have great guys in the locker room, a great coaching staff and great administration. That’s what makes coming to work every day a lot of fun.

Omar Lowery: Our staff and the players. We have a wonderful group of guys to work with every day. Our guys are unbelievable.

Jeff Meyer: Hinkle Fieldhouse. The Butler Way. The culture, the tradition and coming back to Butler in the Big East.

EK: I have quite a bit. I was lucky to play in some great games. I would say Gonzaga stands out to me just because it was College GameDay and obviously, Rose hit the shot. That was a great memory. Last year, Villanova. Any time you beat the No. 1 team on your home court, that’s pretty exciting. Those would be the two that probably stand out the most. I was a senior for the Gonzaga game. It was a lot of fun. Rotnei Clarke didn’t even play in that game because he had the neck injury. It was good to rally and win a big game against a great team.

OL: When Gordon [Hayward] came in. That was fun to see him come in and talk to the guys. He’s gotten jacked up. He’s gotten huge now. It was fun to hear stories from E.K. about when they played and when they were on that national championship run. But it’s every day coming in here. Looking up at the banners motivates you even more.

JM: Senior Day for Joel Cornette. That would have been 2003. Avery Sheets with a late-game three for the win over UW-Milwaukee. That was one game here at Hinkle.

TBC: What are you eating for your pregame meal?

EK: Moe & Johnny’s. We go to Moe and Johnny’s for 2 p.m. games. The biscuits and gravy is unbelievable. It’s the best.

TBC:  What’s in your headphones?

EK: I don’t listen to a whole lot of music before the game. These guys have to keep freshening me up. Even though I’m young, they have to keep freshening me up on the newest stuff. I like Drake and some of that stuff, but I listen to everything. Christian music to country music to rap to anything. I don’t really have a preference. I put it on and enjoy the vibes. I put on Pandora, and next thing you know, you’ve probably already listened to every Drake song they have. You don’t even know what you’re listening to.

OL: Amazon Prime. You just click on the music. I click on pop music. It’s playing when I’m in the office. Or some old-school hip-hop. LL Cool J, no MC Hammer because I’m not that old. A little Jay-Z. Sometimes a little Jodeci when I’m trying to focus. I listen to slow music.

TBC: Do you have a signature move on the court?

EK: Those days are long gone. My goal now is just not to get hurt, not to tear an Achilles or bust up a knee. I don’t really have a signature move. Hopefully just stand there and shoot it. Back in the day, it was the same thing. You shoot it. A turnaround jumper in the post was my only post move. That’s about it.

OL: Has to be the “Sikma down.” I’m teaching Big Joey [Brunk] and Tyler [Wideman] how to get better at it. Just jab and go and try to dunk on them. That’s my signature move. I’m jabbing on ‘em and trying to dunk on ‘em. I can’t jump anymore. Back in the day, that was my move.

JM: The crossover. One-on-one, fake crossover and take it to the rim. Absolutely.