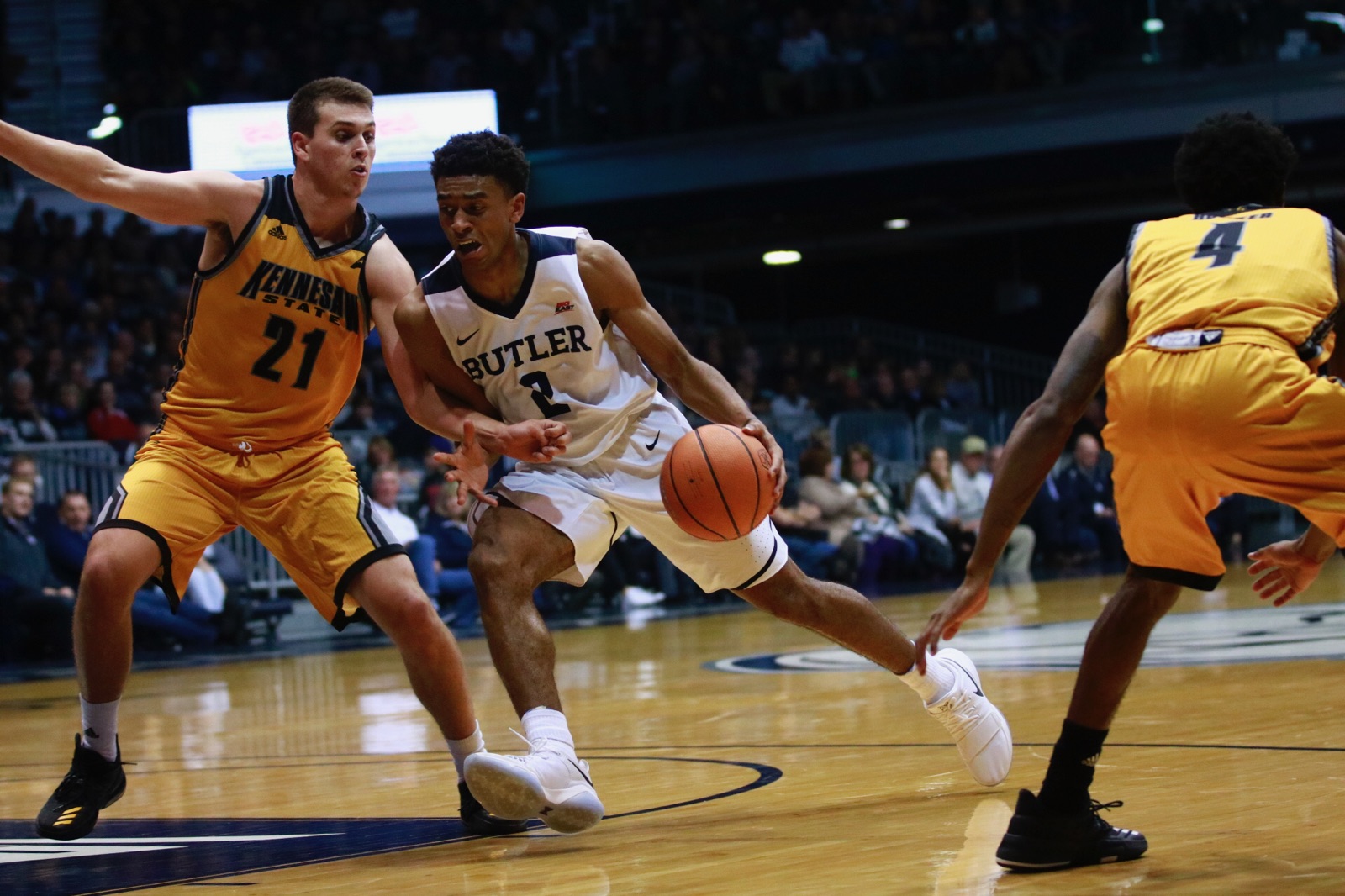 LaVall Jordan’s first game as Butler’s head coach ended in a victory. The Bulldogs started the game on a 9-0 run, but were outscored by the Owls, 40-34, in the second half. As with any team’s first game, there were plenty of positives and negatives. Here are three takeaways.

1. Butler’s perimeter defense has a chance to be elite, but isn’t there yet.

The quartet of Kamar Baldwin, Aaron Thompson, Paul Jorgensen, and Henry Baddley have the potential to form a special defensive backcourt. The Owls struggled to get into the teeth of Butler’s defense in the first half, scoring only four points in the paint. Thompson, Jorgensen, and Baldwin combined for seven of Butler’s nine steals in the game. There were times, especially early, where Butler’s perimeter defense was absolutely suffocating.

However, there is still work to be done. Kennesaw State shot 50 percent from three and went 6-10 from beyond the arc in the second half. This new group of Bulldogs is still learning to play together, but three-point defense was an issue during the team’s two exhibition games and continued to be in this game. Owls guard James Scott led all scorers with 26 points, another concern with all of the talented guards in the Big East.

2. Playmaking will be a shared responsibility for this team.

One of the big questions coming into the season for the Bulldogs was who would handle the ball. It appears that duty will primarily be shared between Baldwin and Thompson. We’re only one game into the season, but it looks like Baldwin, Thompson, and Jorgensen are going to be Butler’s primary playmakers. The trio dished out 12 of the team’s 17 assists in the game and consistently made plays for their teammates.

At the beginning of the game, the ball was moving so well there appeared to be no designated point guard. Five different Bulldogs were credited with assists on Butler’s first 11 made field goals. Whoever got the ball on the defensive end immediately started the offense, which leads to the final takeaway.

3. The offense was fueled by the defense at times and suffered when it wasn’t.

Nearly half (22) of Butler’s 48 points in the first half came off of Kennesaw State turnovers. The Bulldogs logged 10 fast break points and shot 56 percent from the field before halftime thanks in large part to the Owls’ 10 turnovers. Butler got easy baskets and momentum in the game’s opening minutes because of their defense. Now, the challenge is to take those bright spots on defense and make them happen consistently.

In the second half, the Bulldogs only had two fast break points and seven points off of turnovers. As a result, the offense struggled. Butler shot only 44 percent after halftime, including 1-12 from behind the arc. It is no coincidence that the Bulldogs’ tallied 14 fewer points in the second half than the first.