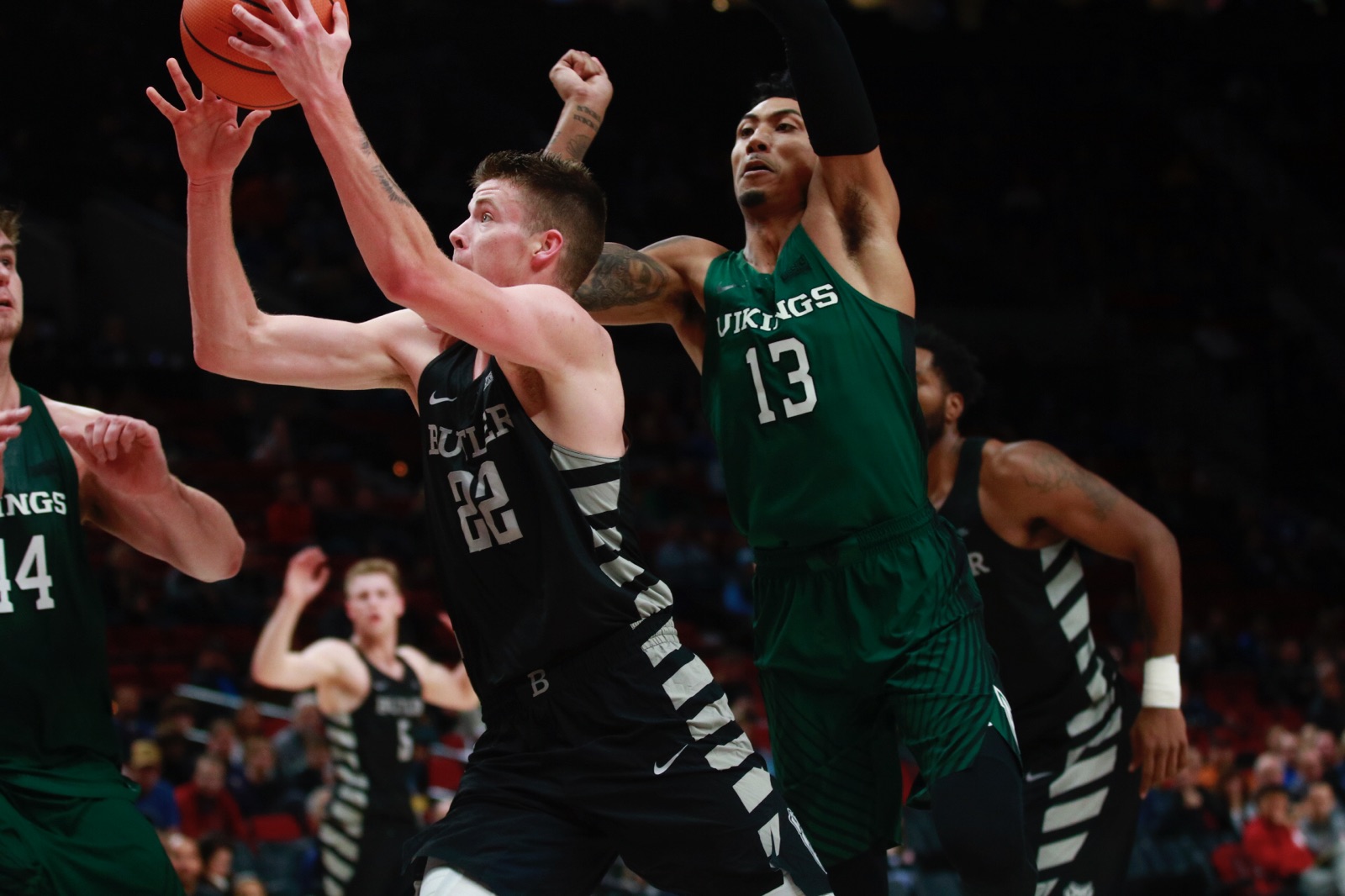 Sean McDermott attacks the basket against Portland State. McDermott injured his ankle in the game and didn’t return. Photo courtesy of Jimmy Lafakis.

Butler’s men’s basketball team looked much better in their second game of the PK80 tournament, grabbing a narrow win over a pesky Portland State team. The offense bounced back from a brutal outing against Texas. That being said, there is still plenty room for improvement. Here are three takeaways.

1. The offense took a step in the right direction but needs to continue to improve.

It took the Bulldogs 15 minutes to match their assist total from yesterday’s game against Texas. They finished with 15 helpers and shot 51 percent from the field, a drastic improvement from yesterday (33 percent). While the numbers looked much better, they don’t tell the entire story. Butler’s offense was smoother, particularly in the first half. There were extra passes that resulted in easy shots. Instead of dribbling and taking on the defense by themselves, they passed the ball around as a team. It appears that there was a concerted effort to get better ball movement and it showed.

However, we’ve seen this story before. Butler’s ball movement improves for a game, only to see it slip back into isolation after isolation. Even in the second half of this game, there were shaky moments on offense. The positive signs we saw at times today need to carry over to the final PK80 game and consistently for the rest of the season. Offensive fluidity can’t come and go like it has through the team’s first six games.

Jorgensen came off the bench and made an instant impact against the Vikings, posting nine points, four rebounds, and three assists in the first half. He knocked down four of his seven three-point attempts and finished the game with 14 points. While he probably won’t regain his spot in the starting lineup, he can be a real weapon and offer something different when he comes in.

He’s had moments of brilliance, but Jorgensen has yet to really find his rhythm in a Butler uniform. If he can build off of this game, by far his best performance of the season, the Bulldogs will have another weapon teams need to be aware of. If Sean McDermott misses any significant time with the injury he suffered, Jorgensen will become even more important. He scored a total of two points in Butler’s two losses so far this season. It’s starting to look like that might not be a coincidence.

3. Butler’s defense is making real progress, but the three-point line is still a major issue.

The Bulldogs followed up a great defensive performance against Texas with another solid one in this game. They held Portland State, averaging just under 90 points per game, to only 69 points on 44 percent shooting. The numbers don’t look outstanding, but this team is figuring some things out and becoming more defensively sound. This is a Vikings team that led No. 1 Duke at halftime and put up 81 points on the Blue Devils. They can really score and made plenty of tough shots against Bulldogs who did everything right defensively.

For all of the defensive positives, there is one glaring weakness; the three-point line. Portland State stayed in the game thanks in large part to a 12-for-26 effort from beyond the arc. Coming into the game, Butler’s opponents were shooting 44 percent on threes, which ranks 337th in the nation. As the Vikings showed, the three-point line is the great equalizer in basketball today. For Butler’s defense to be great or even really good, they have to do a better job guarding the three-point line.