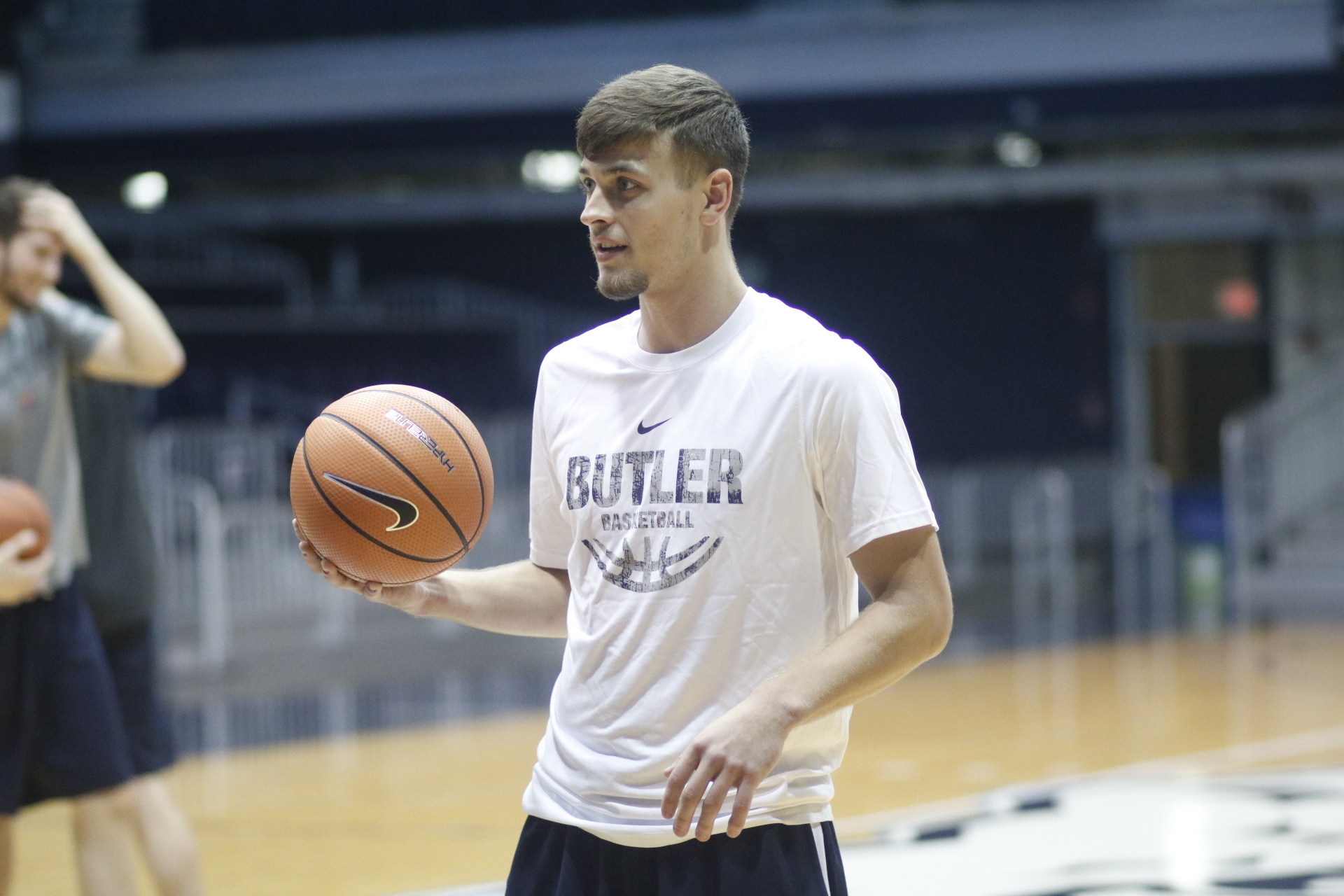 Cooper Neese during one of the team’s summer practices leading up to the school year. Neese will play for Indiana State after announcing his decision to transfer earlier this month.

Cooper Neese was born to be a Bulldog. It was a perfect fit. Fans expected him to be Butler’s next star. These assumptions are now all expired dreams. The Cooper Neese era is over before it even began, as he informed his Butler coaches and teammates he intends to transfer.

Couldn’t begin to tell you how thankful I am for the opportunity to be at Butler. Ready to begin this different chapter. All glory to God!

This news begs the question: why? Why leave the school he was so seemingly attached to?

Neese was a fan favorite, even before he enrolled. When Chris Holtmann bolted for Ohio State, Neese was the first recruit to reaffirm his commitment to Butler. Neese declared that he committed to Butler, not Holtmann.

Yet Neese’s passion for  Butler was contagious, lifting the spirits of Bulldog fans throughout the country.

Neese’s relationship with Samantha Smith — the wife of former Butler player Andrew Smith, who passed away from leukemia in 2016 — also provided fans a positive light during an emotional time. The Smith and Neese families were particularly close, and Cooper and Andrew always chatted about Butler and basketball. Neese honored his friend by changing his jersey number to 44 after he passed, the number Smith wore at Butler.

#Butler fans, this kid is the real deal. Can’t wait to have him in a BU uniform. 32 pts tonight- proud of you, bud! pic.twitter.com/kuAA33LZjn

Neese worked his way into the hearts of Butler fans by simply loving Butler. He fell in love with the school, and the school fell in love with him. Usually it takes a year or so for fans to get to know a player, but Neese got the stamp of approval before he put on a jersey.

His departure leaves feelings of betrayal. Neese seemed to be proud of the fact he was a part of Butler, wearing his Bulldog pride on his sleeve for all to see. He always spoke highly of the university and its people.

This is why I, like so many others, am confused about his decision. We loved Cooper and we thought Cooper loved us, but his feelings seemed to change rather quickly.

Neese was the perfect Butler recruit. A true Hoosier from Cloverdale, Indiana, he broke school records in a legendary high school career. He could have been the leader of a national championship contender at Butler, and a member of the highest ranked recruiting class in school history.

Big things seemed to be happening inside Hinkle Fieldhouse, and Neese was at the forefront of it all.

Players transfer for a number of reasons — problems with the coach, issues with teammates or lack of potential playing time. Yet in an interview with the Indianapolis Star, Neese stated none of these were reasons for his transfer.

“First and foremost, it has nothing to do with the coaches,” Neese told the IndyStar. “The coaches are great people.”

Cooper Neese will transfer from Butler. Talked to him this morning. Had nothing but positives to say about Butler, but did not see good fit.

When the news first broke, my assumption was that Neese, recruited by Chris Holtmann and his staff, was leaving because of new head coach LaVall Jordan. Neese dispelled this rumor right away, saying only good things about the new leader.

So, if Neese did not leave the team for basketball reasons, what was it? My thought would be the academic struggles that come with attending Butler. The university consistently ranks as one of the top schools in the midwest for a reason; it has a good academic reputation. It is possible Neese wouldn’t have been able to manage the stressful college workload.

It took only 24 hours for Neese to sign with Indiana State after receiving his release from Butler. Neese will have to wait until January to enroll in classes, which will allow him more time to transition to the hectic student-athlete schedule, as he will have to sit out an entire year until his eligibility clears in January of 2019.

Neese will immediately be one of the most talented players on the Sycamore roster. He joins a class containing three players; guards Tyreke Keye and Clayton Hughes, and forward Daniel Huenermann. Neese comes in as the highest ranked player out of the group. Once he becomes eligible, it is probable that Neese would see a good chunk of minutes for Indiana State.

Butler’s roster is loaded with backcourt talent — six guards are sophomores or younger — which could have cut back on his playing time. Indiana State, however, will only have five guards left on the roster when Neese becomes eligible, and none of those players were as coveted as Neese was after his near 2,500 point high school career. Neese will be the top dog in Terre Haute without contest, which could not be said if he were still at Butler where ESPN top 100 forward Christian David remain along with three star recruits Aaron Thompson and Jerald Gillens-Butler.

Neese’s opportunities and playing time will come easily with Indiana State, as they need a player to spread the floor and improve their shooting from behind the arc. The Sycamores were seventh among the 10 Missouri Valley Conference teams in 3-point percentage, hitting a measly 35 percent  of their shots from downtown. This is, of course, Neese’s specialty, as he shot percent from deep his senior year alone.

Even after considering all of this, I still don’t quite understand the quickness of the transfer. Neese committed to Butler as a junior in high school. Time and time again he talked about how Butler is his dream school. The worst part about all this is that the fans bought into it. The Butler faithful were ready for Neese to be the next Kellen Dunham or maybe even Gordon Hayward.

Hayward and Dunham are legends for a reason. Their energy on the court was contagious. They displayed the right attitude on and off the court, growing into great basketball players and people. They were walking embodiments of the Butler Way, and Neese led me to believe he was next in line.

That fit was evidently not there from the start, as Jordan said in a release Sunday.

“We wish Cooper all the best moving forward,” Jordan said. “He expressed to me that he didn’t think Butler and our program were a fit for him, and he wanted to make this move before the season began.”

As for the Bulldogs, it is time to turn their attention toward the season. The loss of Neese will not affect the rotation much this year, as the combination of Kamar Baldwin, Henry Baddley and Paul Jorgenson will eat up most of the minutes available in guard spots.

The real problem lies in the future.

After graduating six seniors this past season, Butler will graduate two more next spring: Kelan Martin and Tyler Wideman. That leaves the Bulldogs with 10 men on the roster for the 2018-19 season so far. Recruits have yet to sign with Butler for next season.

The transition from Holtmann to Jordan put a freeze on the recruiting channels for Butler. Jordan has large shoes to fill. Holtmann recruited two of the best freshmen classes in Butler history and picked up transfer students from top destinations around the country.

If Jordan cannot add more recruits to their program for the upcoming seasons, it will be hard to put together a team that can win in a competitive Big East conference.

Given status among Butler fans, Neese’s decision is presently difficult to stomach; however, his departure will do much more damage to Butler’s future in the Big East.

Cooper Neese is gone, but the Bulldogs are still here.