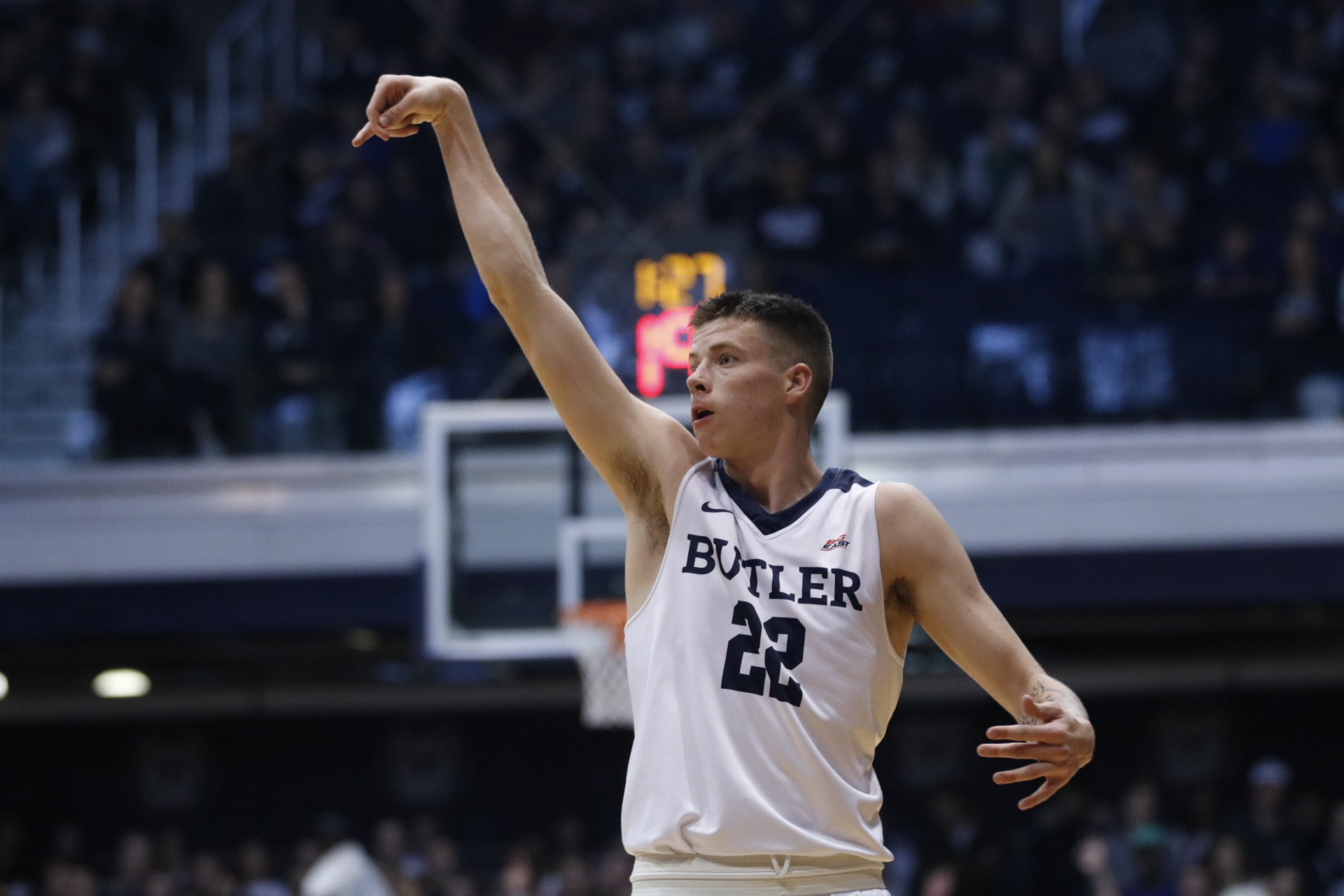 Redshirt sophomore Sean McDermott follows through on a shot against Hanover on Oct. 28. McDermott finished with 14 points to lead the team. Photo by Jimmy Lafakis

Sports can mean everything for some, providing closure in the most unexpected ways. For some, it can give life a chance to come full circle. For Butler’s Joey Brunk and his family, basketball delivered once again, in a way maybe only sports can. Closure was a Butler win over Hanover College in the team’s first exhibition game of the season.

Brunk made his first appearance in a Butler uniform since last December after filing a hardship waiver for his freshman year that same winter. In April, Brunk’s father and Hanover basketball alum passed away after battling brain cancer. Brunk had family and friends at the game, and during the first half, Butler honored Brunk’s father with a P.A. announcement.

Nice tribute to Hanover alum Joe Brunk, the late father of the Bulldogs’ Joey Brunk, at the end of the first media timeout. pic.twitter.com/x7lZZLAVeJ

“The fact that we could honor his legacy, I thought it was tremendous,” head coach LaVall Jordan said.

Despite the high score, the Bulldogs’ defense may have been their strongest point of the game, wrangling 17 turnovers from Hanover for 29 points. The home team out-rebounded Hanover 27 to 41. Offensively, Butler’s shooting percentage hit 46 percent.

A look at the numbers from the first half… pic.twitter.com/klGj77CQrI

“They were engaged every possession,” Jordan said. “That doesn’t mean we didn’t make mistakes, but I thought we were fully engaged throughout the game all the way until the end.”

After a breakout freshman season resulted in 59 total steals, Kamar Baldwin’s transition from guard to point guard was one of many storylines during the offseason. It was only fitting for the sophomore to open the game with a steal to produce the same acrobatic layup that dazzled fans last year.

“I felt very comfortable,” Baldwin said. “In practice this summer and in Spain I got a lot of practice shots and today — game time — it felt very smooth.”

Baldwin was one of two Bulldogs in double digits, shooting a perfect 4-for-4 for 1o points. Redshirt sophomore Sean McDermott led the team with 14 total points.

“I’m definitely getting more comfortable as we go,” McDermott said. “In my third year I’ve learned a lot, I know what’s expected and the coaches put me in great positions.”

Guard Aaron Thompson led in minutes among the three freshman recruited by previous head coach Chris Holtmann. The four-star recruit from Virginia tallied 19 minutes and was 2-for-3, including a twisting layup reminiscent of Baldwin’s signature scoring.

Freshman Jerald Gillens-Butler and Christian David also ate up minutes off Butler’s bench, playing 13 minutes each. David sported a brace over his right knee, the remainder of an ACL injury sustained during high school, but seemed unhindered.

Recruited walk-on Campbell Donavan made his first appearance to cheers from the crowd with less than five minutes to go, when Jordan had all four freshman and Brunk on the court.

Strong @BUDawgPound turnout for the exhibition…and they have taken a liking to Campbell Donovan. Will be a four-year favorite. pic.twitter.com/oUHCoJ5c3g

Butler’s second and final exhibition game will be at home against Lincoln Memorial on Nov. 4. Tip-off is scheduled for 7 p.m.