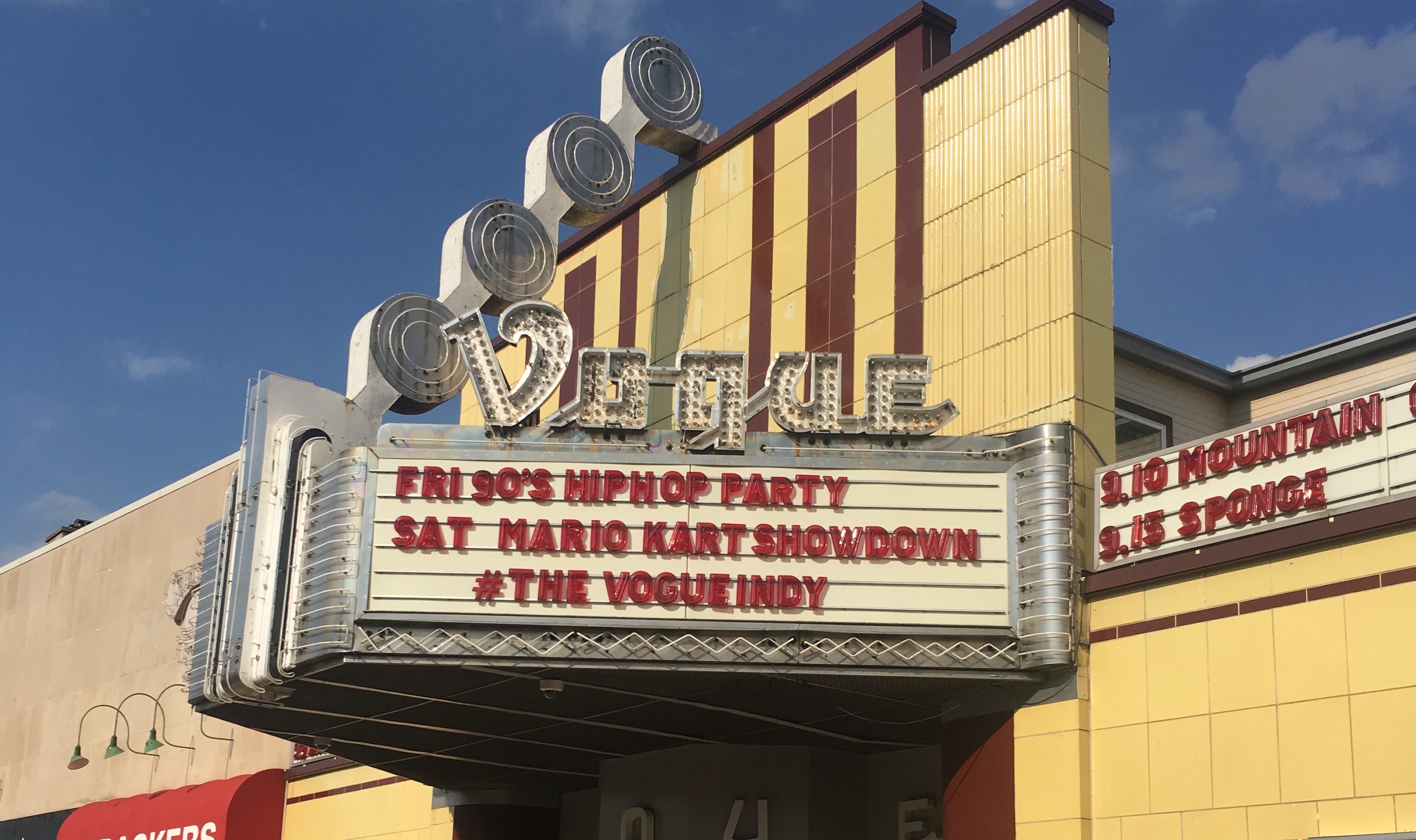 The outside of Vogue theatre in Broad Ripple. Vogue opened in 1938 and now acts as a night club. Photo by Rae Stoffel

Broad Ripple, a neighborhood just minutes from Butler’s campus, is always full of students and Indy residents alike. From dog bakeries to comedy clubs, Broad Ripple has it all, even a vinyl shop and a historic live music venue.

Indy DC & Vinyl, located on Broad Ripple avenue opened in 2001 after moving from the Salt Lake City area. The store sells a multitude of different genres, both CDs and Vinyl.

Mike Contreras, the store’s manager and vinyl buyer, is very proud of the selection they have to offer.

“We have more genres than I think any other vinyl store in the area and easily the best selection,” Contreras said. “We’re constantly buying new records and always getting new music in.”

His favorite venue to see live music was called the Patio, but it closed in 2001, putting a damper on Broad Ripple’s music scene.

“When the Patio closed, the music scene kind of died,” he said. “There isn’t really anywhere else for live shows like that.”

The Patio was a music club that opened its doors in the 1960s. The club hosted hundreds of bands including The Meat Puppets, Acid Green and Birdmen in its years of action, before it closed in late 2005.

According to Nuvo, the closing of the Patio was a business decision only.

“Based on the market, the Patio has not been doing the business it used to in past years, and sales have continued to decline,”  Matt Schwegman of the Patio said in an official statement in an interview with Nuvo.

The Lava Lounge, a hookah bar, currently resides where the Patio once stood.

The Vogue is one of the neighborhood’s oldest venues. It opened in 1938 as a movie theater and continued on that route until the mid 70s. In December 1977, the theater opened its doors as a nightclub.

Since then, the venue has played host to hundreds of famous bands and musicians, with the average foot traffic of 300 people per show, staff member Jennifer Brinduse said.

Some of the more famous names to play The Vogue include John Mayer, P!nk, Ice Cube, Rihanna, Fitz and the Tantrums, and Dave Matthews Band.

Marcus Johnson, manager of The Vogue, monitors attendance levels for the different shows and has noticed the club’s typical audience does not respond too well to change.

“The people like a certain type of music, and it’s hard for experimental bands to do well here,” Johnson said. “We do a lot of rock and cover bands here.”

“People are very rooted in what they’ve been hearing and don’t really want anything else,” she said.

The Vogue averages around 275 shows a year, and a majority of those shows are rock bands that are already pretty established.

Brinduse explained the venue often does not sell out with newer bands or unknown names.

Though The Vogue’s attendee’s have a very niche taste, the venue still gets some pretty big names.

“We had a private event event a few weeks ago with a very big name, but since it was private we couldn’t, you know, advertise it at all,” Johnson said.

Johnson was unable to reveal the artist who played the venue.

While live music thrives at The Vogue, some students at Butler have no knowledge of it, or the music scene of Broad Ripple at all.

Gwen Sell, a sophomore vocal performance major, has not heard much about the venues in Broad Ripple and would not say that it has its own music scene.

“Most of the people that I know have performed in downtown Indy, not in Broad Ripple,” Sell said. “You could say there is a little bit of a music scene starting to grow there. I mean, there are live bands in the bars and coffee shops from time to time.”

Sell explained she has not experienced much of the music scene when she visits Broad Ripple but thinks it has a chance to develop more.

“I’m hoping things start up again, I mean it’s a really cool area and I think live music would add to its hipster ambiance,” Sell said.