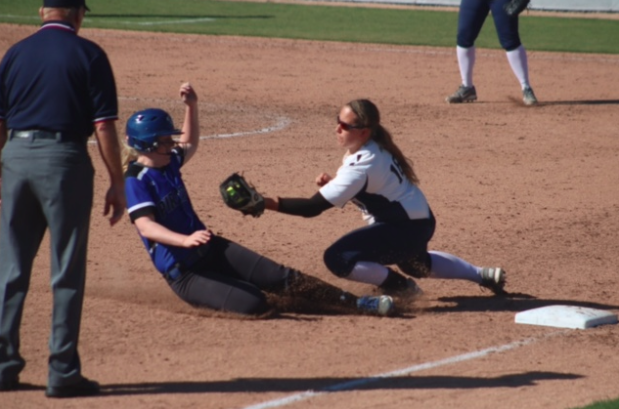 Alyssa Lach tags the runner for an out. Photo from Collegian archives.

The Butler University softball team went 5-2 at the Under Armour Showcase in Tampa, Florida. over the weekend and improved to 11-11 on the season.

The Bulldogs started off March 8 by splitting two games against Central Michigan University and Fort Wayne.

The Bulldogs pushed four runs in the seventh inning against Fort Wayne to create an advantage, and Butler won 5-1. Sophomore infielder Cheyenne Thompson hit a two-run double and junior outfielder Sarah Dixon added a sacrifice. Thompson later came around to score on a Fort Wayne error.

Junior pitcher Mikelia Boroff went 5.1 innings in the circle for the Bulldogs. Boroff scattered three hits and improved to 2-1 on the season.

“We’ve been thinking about our ‘why,’” sophomore outfielder Jenna Foreman said. “I think that’s been helping us just leave everything on the field and work hard for each other.”

In game play on March 10, the Bulldogs lost 10-2 to La Salle University in six innings before adding a 5-2 win over Monmouth University later in the day.

All three of Butler’s hits against La Salle came in the first inning as Butler pushed its only two runs across. Redshirt sophomore infielder Maggie MacBeth and Foreman had back-to-back singles and were knocked in by Christiansen.

“We started to do the little things right and didn’t beat ourselves,” Dixon said. “We had some key hits and plays and played well together.”

Dixon hit a solo home run against the opposing Bulldogs. After Yale tied the game at 4-4 in the top of the fifth, the Bulldogs scored the eventual game-winner in the bottom of the inning.

Schnaiter pitched a complete game against South Florida to earn the win. She allowed only two hits and three walks. The Bulldogs drew first blood and never looked back, as they pushed across a pair of unearned runs in the second inning.

The weekend ended on a high note as Butler defeated Central Connecticut State University 3-1 on March 11. Freshman infielder/pitcher Kennedy Minko hit a solo home run to tie the game at 1-1 in the fifth inning, while MacBeth’s triple added the insurance runs. Schnaiter came in relief and got the win for the Bulldogs.

“We finished strong and really came together as a team to get that winning streak,” MacBeth said. “That is important because we start conference soon.”

The Bulldogs will play four games next weekend, March 17-19, in Edwardsville, Illinois in a Southern Illinois University-Edwardsville hosted event.