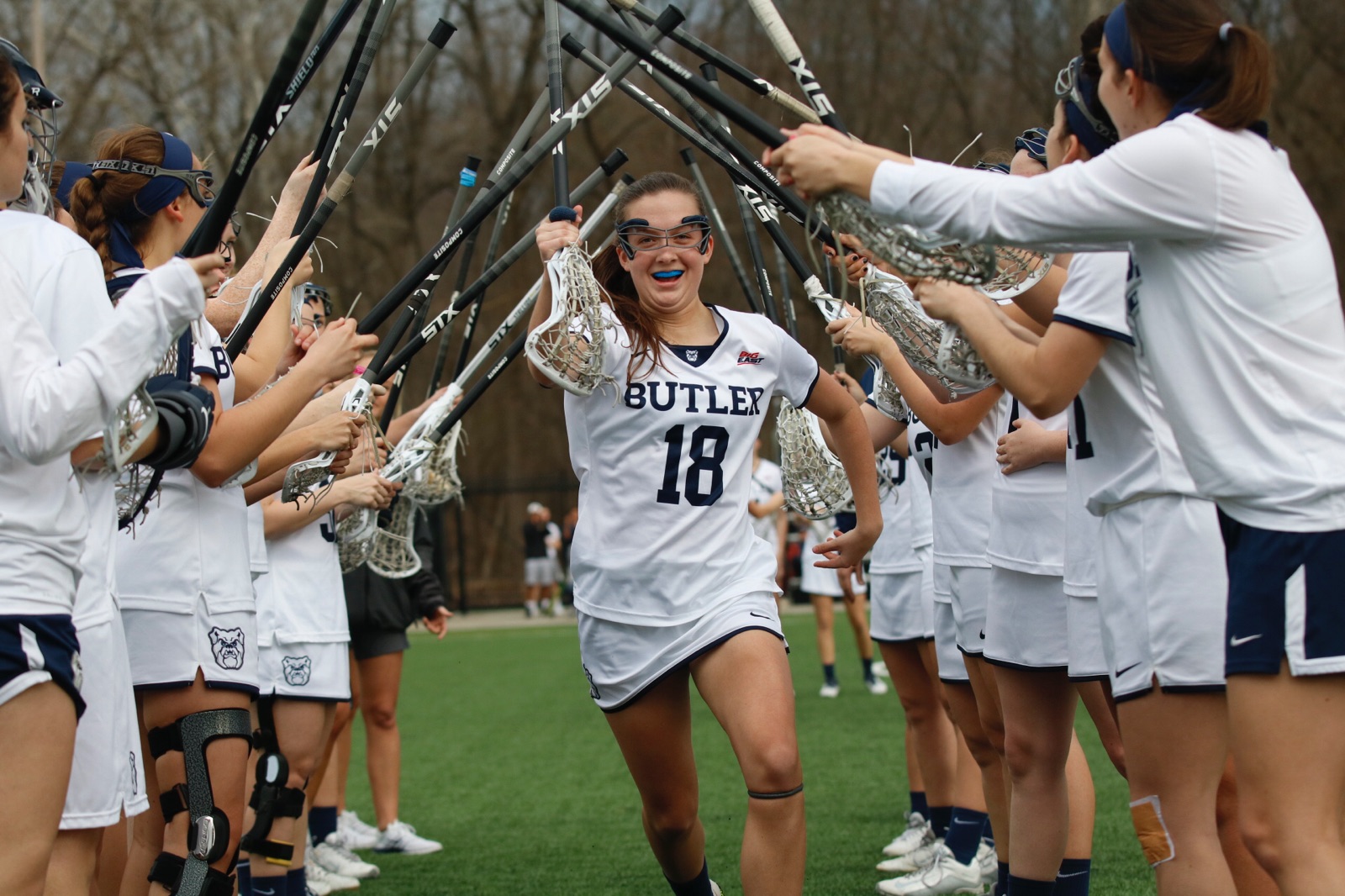 Carly Hewitt runs out during introductions for a women’s lacrosse game. Photo by Jimmy Lafakis.

The news about the new team shocked sophomore Carly Hewitt. If she chose to accept the mission, she would throw her entire plan off course. The environment would be familiar, but she could not know the full consequences of her decision.

Hewitt came to Butler intending to play soccer but was unsure about making the commitment as a Division-I athlete. Instead, she served as a women’s soccer manager last year and planned to try out for the team her sophomore year. One day during practice, a teammate mentioned a women’s lacrosse team coming to Butler and Hewitt decided to join.

She received five varsity letters in lacrosse at Orono High School in Long Lake, Minnesota. She became a three-time defensive MVP and served as a team captain after winning her first letter in eighth grade.

She earned three varsity letters in soccer, won state championships at the club and high school levels and earned all-conference honorable mentions twice. Hewitt said that after some initial hesitation, she decided she wanted to take a Division I sport head-on.

“I always saw myself playing soccer,” Hewitt said. “It was always such a staple in my life. But I saw a new opportunity and wanted to give it a try.”

Hewitt said she has always loved soccer. She said her new adventure made her feel more passionate about lacrosse.

“This whole thing has been a surreal feeling,” Hewitt said. “Lacrosse has started to grow on me, and now I love it.”

The new journey did not come without struggles. Even though she played lacrosse before, she had to learn how to adjust to the college game on the fly. She said she was going back on defense instead of charging forward, and a year off took a physical and mental toll on her.

“When you think about it, taking a year off a college sport is insane,” Hewitt said. “At the beginning of the year, my coaches said, ‘You’re definitely a soccer player.’ They could tell because I wasn’t as aggressive as I needed to be.”

“The girls love how hard she works in practice and in the games,” Beierschmitt said. “Every time she makes an interception or a good play on defense, everyone goes wild. We love her energy on defense.”

Individual workouts strengthened the coach and player’s relationship. Beierschmitt, a defensive coach, said Hewitt put in the work she needed to see.

“We are so lucky she took a chance and decided to do something out of her comfort zone,” Beierschmitt said. “Once we showed her she can have confidence in herself as a player, she has given us more than we could have ever asked for.”

Hewitt struggled to part from her friends on the soccer team, but said she has found a special relationship with freshman midfielder Taylor Kinn. Kinn, who hails from Ramsey, Minnesota, said the home-state connection molded a bond.

“We gravitated toward each other,” Kinn said. “She is always working the hardest out there on the field. I respect her for her work ethic.”

Kinn said she looks to Hewitt for inspiration during tough times.

“I think what she has done is incredible,” Kinn said. “She is a role model because she is older than me. She is now one of my best friends at Butler.”

Not everything has changed for Hewitt. She remains close with some women’s soccer players. She lives with sophomore soccer defender Kyra Cooke in Fairview House. Cooke said she feels Hewitt’s absence on the soccer pitch.

“She was so involved,” Cooke said. “She dedicated so much time to the team, whether that was setting up the field for practice, putting out uniforms on game day, filming and even participating in practice.”

Hewitt and freshman midfielder Taylor Lores have started all four games this season. Hewitt has totaled one shot on goal, one draw control and three ground balls so far. Lores said Hewitt’s problem-solving abilities have assisted both players this year.

“Since she’s an actuarial science major, that helps her on the field,” Lores said. “She looks at an equation and tries to figure it out. She gives me advice for everything.”

“I am so passionate about lacrosse now,” Hewitt said. “This whole thing has been crazy, but I know I made the right decision.”