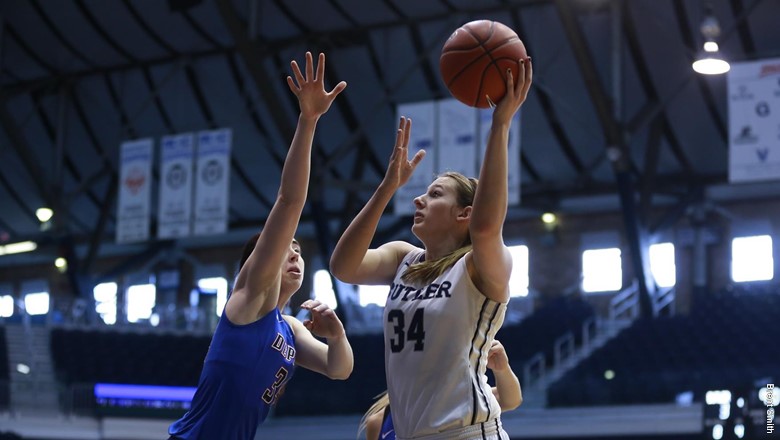 Tori Schickel attempts to put the ball in the basket over a DePaul defender. Photo provided by butlersports.com.

The Butler University women’s basketball were in a similar situation on Feb. 24. Enthralled in a close game with another Big East foe, this time Providence College, but ultimately Butler fell to Providence 64-58.

After clinging to a 31-28 lead at halftime and being tied after three quarters, the Bulldogs were not able to stop several of the Friars’ stars.

Butler began the game confidently, shooting over 50 percent from the floor in the first quarter. The Bulldogs led 19-15 at the end of the quarter thanks to an 11-2 run and nine points from junior guard Sydney Buck.

Clara Che hit an early three for Providence to begin the fourth quarter. Butler would answer, and Tori Schickel made a layup with just under six minutes left to take a 51-50 Butler lead. It would be short lived, as Yoyo Nogic answered with a bucket to give Providence the lead back.

Three late turnovers doomed Butler. After the under-five minute media timeout, Butler had back-to-back turnovers. Providence scored and took a 55-50 lead with 2:47 left in the fourth quarter. Buck would get the Bulldogs back within three, but a Che three for Providence with 40 seconds left gave the Friars a full two possession lead and the game.

“I think we definitely competed hard, but we had some dumb mistakes near the end,” Buck said. “We just couldn’t finish it out.”

Providence was led by the sophomore Nogic with 19 points. Junior Allegra Botteghi had 15 points and 13 rebounds, while sophomore guard Che finished the game with 14 points.

Butler was led offensively by Buck, who totaled 16 points. Schickel added another double-double with 11 points and 19 rebounds.

Starting sophomore guard Taylor Buford added four points and two rebounds in 15 minutes of playing time. She said playing in close games is key for Butler to prepare for the conference tournament next week.

“We’re just going to go back and keep practicing, getting repetitions, and getting more aggressive,” she said.
The Bulldogs finish up the regular season at home on Feb. 26 against Creighton University at 1 p.m. on Fox Sports 2. Butler will play in a first round game on March 4 in Milwaukee to begin the Big East Tournament.