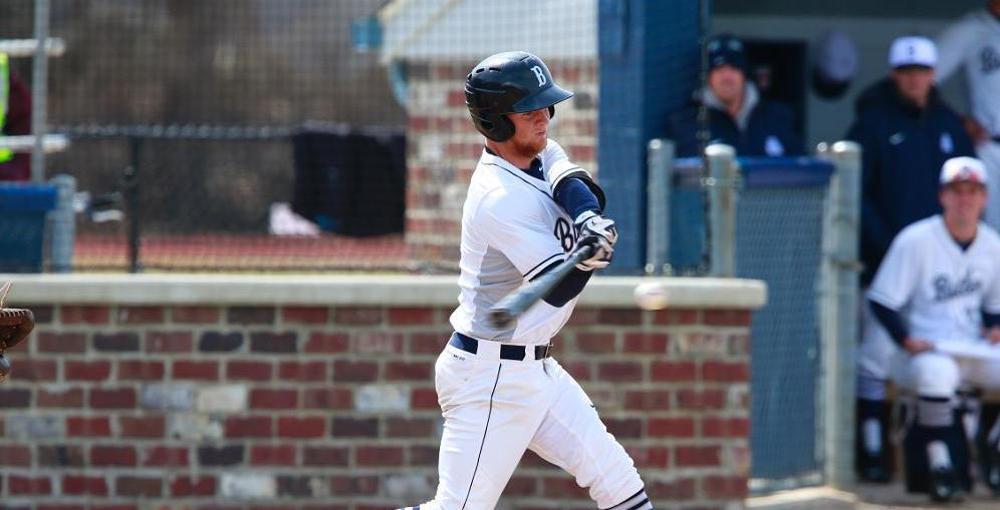 Junior Tyler Houston in mid-swing during a game last year. Photo from butlersports.com.

Brownsburg High School, located less than half an hour away from Butler University, has provided one of the great athletes in Butler history in current Utah Jazz player and NBA all-star Gordon Hayward. Junior outfielder Tyler Houston is carrying on the legacy of Brownsburg alumni starring for the Bulldogs, this time in baseball.

Houston’s production in his first two seasons at Butler earned him an invitation to play in the Cape Cod Baseball League last summer, which is a select league for MLB teams to evaluate top college baseball players. More than 1,100 MLB players have participated in the league throughout its history. Houston was named a Cape League all-star, becoming the first Bulldog ever to earn that honor.

The visibility Houston received from playing in front of scouts for every MLB team in the Cape Cod League and his body of work with Butler has made playing professionally a legitimate possibility.

“He’s got all the tools to play at the next level,” Butler head coach Dave Schrage said. “He’s a complete baseball player. He’s got power, speed and athleticism. That’s a great combination in a ballplayer.”

Houston will be eligible for this year’s MLB draft in June since he will be three years removed from high school. The Arizona Diamondbacks, Toronto Blue Jays, Milwaukee Brewers, Cleveland Indians and Oakland Athletics all declined to comment for this story due to competitive advantage concerns over giving out information on a draft prospect.

“It’s honestly always been a dream, but education is also a big thing for me,” Houston said. “I think that professional baseball is a great opportunity if I’m lucky enough to get the chance. I’m not going to take that for granted. I’m just trying to have a good year the rest of this year and see what happens.”

Sports have always been an integral part of Houston’s life and his love of athletics began at an early age.

“Growing up, I had a good group of neighbors around me,” Houston said. “They were mostly older so they were already into sports. What they played, I always wanted to follow along. Starting young, I was playing baseball and basketball but as I got older baseball was just kind of the one that took hold of me.”

When it came to choosing a college and continuing his baseball career, Houston’s decision to come to Butler was not a difficult one.

“The academics, the baseball, all that combined just seemed like the perfect fit for me,” Houston said. “The younger I was, the more I wanted to go away from home but the older I got the more I realized how good I have it here and how nice and convenient it would be to be closer to home and at a great academic school with a good baseball program.”

Houston burst onto the scene at Butler quickly, leading the team with a .324 batting average and pacing the Big East conference in runs his freshman season in 2015. He was named a Collegiate Baseball Newspaper 2015 Louisville Slugger Freshman All-American and was a second team All-Big East selection for his performance.

Congrats to Jr OF Tyler Houston on his preseason All Big East selection. 59 days until opening day! #GoDawgs pic.twitter.com/snCRaggHtZ

Houston posted a .304 batting average and scored 28 runs in 2016 despite the Bulldogs struggling as a team with a 14-54 record. He has been a key piece to Butler’s 5-3 start this season.

“He’s a great motivator, works hard and also gives his best effort,” junior infielder and pitcher Garrett Christman said. “In the lineup, he’s one of the guys that we look for to get on base a lot and drive in runs because he’s got a lot of power in his swing and hits for average as well.”

As he enters his third season with the Bulldogs, Houston has become one of the team leaders on and off the diamond.

“One of his greatest attributes is he’s very energetic,” senior pitcher Jeff Schank said. “He brings this awesome, loose energy to the field.”

Houston, a finance major, has goals that extend beyond baseball as well.

“Me and one of my buddies from back home have always had a goal of having our own financial firm,” Houston said. “At first it was kind of a joke, but now I think it would be fun to stay in close touch with him and have that.”

Whether it is hitting home runs and manning center field in the hopes of being drafted or preparing to own a financial firm, Houston is taking full advantage of everything Butler has to offer to carve out a successful career for himself.

3 run #moonshot for Houston, followed by RBIs for Hartnagel and Parker. 9-0 Dawgs after 2 #eat pic.twitter.com/UA8EnKMC1g