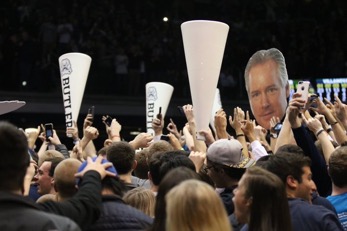 Butler fans storm the court after the Bulldogs defeat No. 1 Villanova. Photo by Jimmy Lafakis.

Hinkle Fieldhouse has been home to some of the greatest moments in Butler sports since it was built in 1927, and it has been the center of the basketball world in one of the biggest basketball states in the country.

Hinkle has seen buzzer beaters, upsets and tournament wins that put Butler on a national stage. It demands greatness, and Bulldog fans receive greatness on a regular basis.

It is one of those places that gets your heart beating when you walk through the front door. My heart starts pounding even when I walk into Hinkle on Mondays and Wednesdays for a basketball class in the West Gym where I get to shoot free throws under Butler legends such as Joel Cornette, Gordon Hayward and Andrew Smith.

And that’s when the place is empty.

When it’s packed with 9,100 screaming fans, it’s a whole different story. Hinkle is a seventh man behind the five players on the floor and the sixth man in the stands.

Ninety years is a long time for a basketball arena to be around, so Hinkle has seen plenty of great moments. Let’s take a look at the top-5 Hinkle Fieldhouse moments starting with number five and moving towards the top spot.

I doubt anybody reading actually made it to this game in December of 1928. Pittsburgh rolled into town on a 27-game win streak. This was during a time when the NCAA tournament and National Championship did not exist, but Pittsburgh was considered to be the defending champion. Butler defeated the Panthers 35-33 to hand Pitt their first loss since the 1926-27 season. Butler started the trend of knocking off defending national champions in Hinkle that continues to this day.

This game occurred a long time ago, but considering what we witnessed recently with Villanova, I can only imagine what it meant to the school and the team back in 1928.

Butler vs. Gonzaga is one of the best Butler games in the past five years. A matchup between two top-15 programs on national television, and ESPN’s College Gameday was on Butler’s campus. The stage doesn’t get bigger for a regular season college basketball game.

The game itself did not disappoint either.

With 3.5 seconds on the clock, Gonzaga was set to inbound the ball with a one-point lead. Three and a half seconds later Butler won 64-63. Butler’s Roosevelt Jones stole the inbound pass and hit a floater from the free throw line over Gonzaga’s Kelly Olynyk to lift Butler, the 13th ranked team in the nation, over the country’s eighth ranked team.

Obviously it was a great game and a great win for Butler. The Bulldogs were two years removed from back-to-back national championship runs in 2010 and 2011, and their 2011-12 campaign was less than stellar. The win showed the college basketball world that Butler was here to stay on the national stage.

Number three on the list is the 2003 Horizon League Tournament Championship Game. Avery Sheets, who had six points in 16 minutes in that game, hit a three at the buzzer to beat Milwaukee and give Butler an automatic bid to the NCAA tournament.

Butler squared off against the No. 11 ranked Indiana Hoosiers, a Indiana team who featured Damon Bailey, who is now an assistant coach for Butler’s women’s basketball team. Butler defeated Indiana 75-71, their first win against the Hoosiers since 1958. The game was much more than a win, it put not just Butler basketball, but Butler sports on the map.

“The Indiana game was a huge game in Butler sports history,” Butler professor and alum Scott Bridge said. “Indiana came into the game ranked No. 11 in the country and Butler beat them. It was a turning point for Butler sports.”

Butler won this game the Butler Way. They shot less than 40 percent from the field and took less than nine free throws, but their defense made an impression on Indiana’s iconic head coach, Bob Knight.

“They [Butler] played excellent defensively,” Knight said in a Chicago Tribune story. “I think they took us out of a lot of things.”

You probably guessed this game would be No. 1 without even reading this, but this win is one of the most impressive wins in Hinkle Fieldhouse history.

Before we even get to Butler, Villanova was on a 20-game win streak, defending national champions and featured Josh Hart, a front-runner for the Naismith College Player of the Year award. That alone makes the win incredible.

In addition, Butler was on the tail-end of a rough and emotional week for the program. A week that included a loss to St. John’s in the Big East Conference opener, and a scary experience in-flight when Butler’s plane lost cabin pressure and it had to make an emergency landing.

The Villanova game meant a little extra to the basketball team and to the university.

Over Hinkle’s 90-year history it has seen some of the best college basketball games since 1928.

Tony Hinkle said it best: “If only the Fieldhouse could talk, the stories it would tell.”