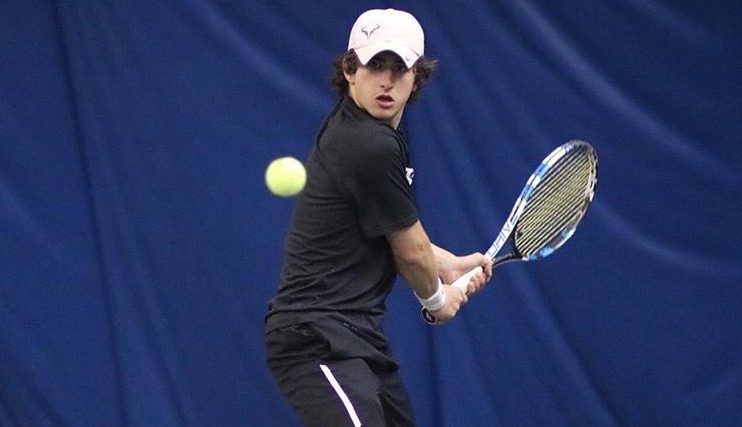 Adrian Mag prepares for a backhand during a tennis match. Photo from Collegian archives.

When watching sophomore tennis player Adrian Mag on the court, one would not be able to guess his passion off the court.

Mag was raised in Windsor, Ontario — a city just across the river from Detroit, where his father manages a tennis club.

“I’ve probably been playing tennis since I was less than half the height of the net,” Mag said. “I was the little kid running around, swinging a tennis racket that was way too big for his body.”

Mag finished last season 12-9 overall in singles play, including a five-game win streak, according to the Butler athletics website.

However, Mag possesses a talent off the court as well. When Mag isn’t playing tennis, he is a DJ.

Unlike tennis, DJing was not rooted in Mag’s upbringing. He was first exposed to it his freshman year of high school by producer and friend Tim Cook. After Cook introduced him to this side of music, Mag’s own intrigue sparked his interest.

“He basically introduced me into the side of music I had never known — the production side of it,” Mag said. “How music is made, the layering, the construction of it. It’s almost like a building — you’re don’t know how it was built. That’s kind of the outlook I had on it.”

Mag made his first visit to Butler on a recruiting trip his senior year of high school during Butler’s homecoming weekend. Mag decided that weekend Butler was the school for him.

“I feel like it’s hard not to love a school during Homecoming,” he said.

He said it was the university’s tennis program that solidified his decision and made him want to come to Butler.

That was also the weekend he met future first-year roommate and teammate Mason Dragos. The two were both on a recruitment visit and hit it off.

“Rooming with him was pretty crazy,” Dragos said. “The kid would have 25-30 people in lined up at the door listening to him. Our room would get packed with people.”

He said it was a surprising twist.

“I never really had like a huge passion for music,” Dragos said. “I never would’ve pictured myself being close with a DJ.”

Like any good athlete or DJ, Mag practices all the time to improve himself and his skills. Whenever he is not playing tennis, he is mixing in his room.

“I’m probably the reason we get a lot of noise complaints,” Mag said. “Sorry to my roommates.”

Mag pointed out that some people mistakenly think he produces music. Producing isn’t where he finds joy. It is in putting the music together.

The combination of DJing and being a Division I athlete is not an everyday one, and Mag knows it.

Mag stresses the importance of time management in his life, especially during tennis season. He plans on DJing Thursday nights at Subterra Lounge in downtown Indianapolis for the rest of the semester.

“I would love to make it into a job in the future,” he said. “For right now, it’s open to getting into how good I can be and seeing where it goes.”

Slater Hogan, owner of Keepin’ it Deep Events, helped Mag get started in the Indianapolis night scene. Since Mag is an international student, he cannot work for Hogan without a work visa, so Mag volunteers for experience.

“Adrian is very passionate about his music and that is something that you have to have in order to succeed,” Hogan said. “You have to have that passion with all the long days, nights spent alone in the studio. I always say, if you do it for the love, the money and success will come later, and I believe Adrian will succeed.”

As an international business major and Spanish minor, Mag said he would love to travel for his work in the future and share his talents beyond the borders of North America.

Adrian emphasized the importance of communication and stepping into the shoes of someone of another culture as a means of understanding them.

“He’s a really meaningful kid,” Dragos said. “He’s going to do big things when he grows up.”