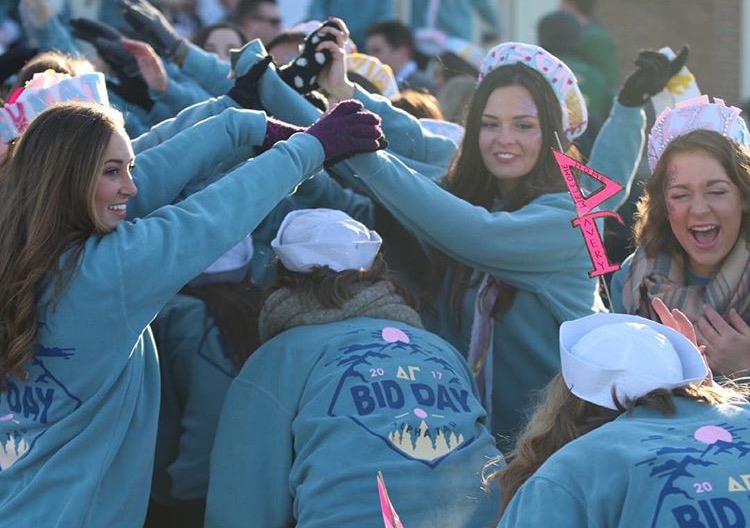 On Bid Day, affectionately known across campus as “Bidmas,” students who have participated in recruitment receive a bid, officially join their new sorority or fraternity.

Students came back to campus during the week before classes started.

Over the three days leading up to Bid Day, students who are interested in joining a Greek house go through the recruitment process, involving going to the Greek houses on campus to visit and talk with current members. There, Greek hopefuls can decide which house is the best fit for them and current members can decide to which students they would like to extend a bid.

On Bid Day, students celebrate joining their new homes after signing their bid cards and all of the houses on campus join in the celebration together.

Greek Life Director Becky Druetzler said the growth was expected because of the massive size of this year’s first-year class.

“It’s on the same trajectory as it would have been but it really comes down to the size of our first-year class,” Druetzler said. “In terms of the percentage of students who participate, it is very consistent with what we have seen before. It’s just that when you do the math it was a pretty easy equation to anticipate.”

Despite the increased numbers of students who were interested in joining Butler’s Greek organizations, recruitment week went off without a hitch.

“The whole process itself ran extremely smoothly this year,” Druetzler said. “One of the things that helped that is we didn’t have any complications from the weather.”

Some small adjustments were made to accommodate the additional students. For sorority recruitment, an additional time period was added to the day so that the total number of students could be more spread out. For fraternity recruitment, participants were encouraged to fill out a schedule of where they were planning to attend so that each house could prepare.

First-year student Ellen Ward joined Alpha Phi on Bid Day. She said she did not see logistical complications with the increased amount of Greek hopefuls.

“It was more a problem of people being competitive,” Ward said. “I am a pretty even-keel person, so I wasn’t stressed about the numbers of people going to the houses. But I think other people were feeling pressure. I don’t think it should feel like a competition.”

First-year Nathan Bruns pledged Delta Tau Delta on Bid Day. He said that the amount of students rushing did not make too big of a difference.

“I feel like it wasn’t too crowded because during rush events fraternities did a good job of breaking people up into small groups and getting people one on one for conversations,” Bruns said.

Because of the increased numbers of students that are interested in Greek life, for the last year, the university has been working on the addition of a new fraternity to the Butler Greek Community. According to Druetzler, it is a lengthy process, but the addition could be made as soon as next year.