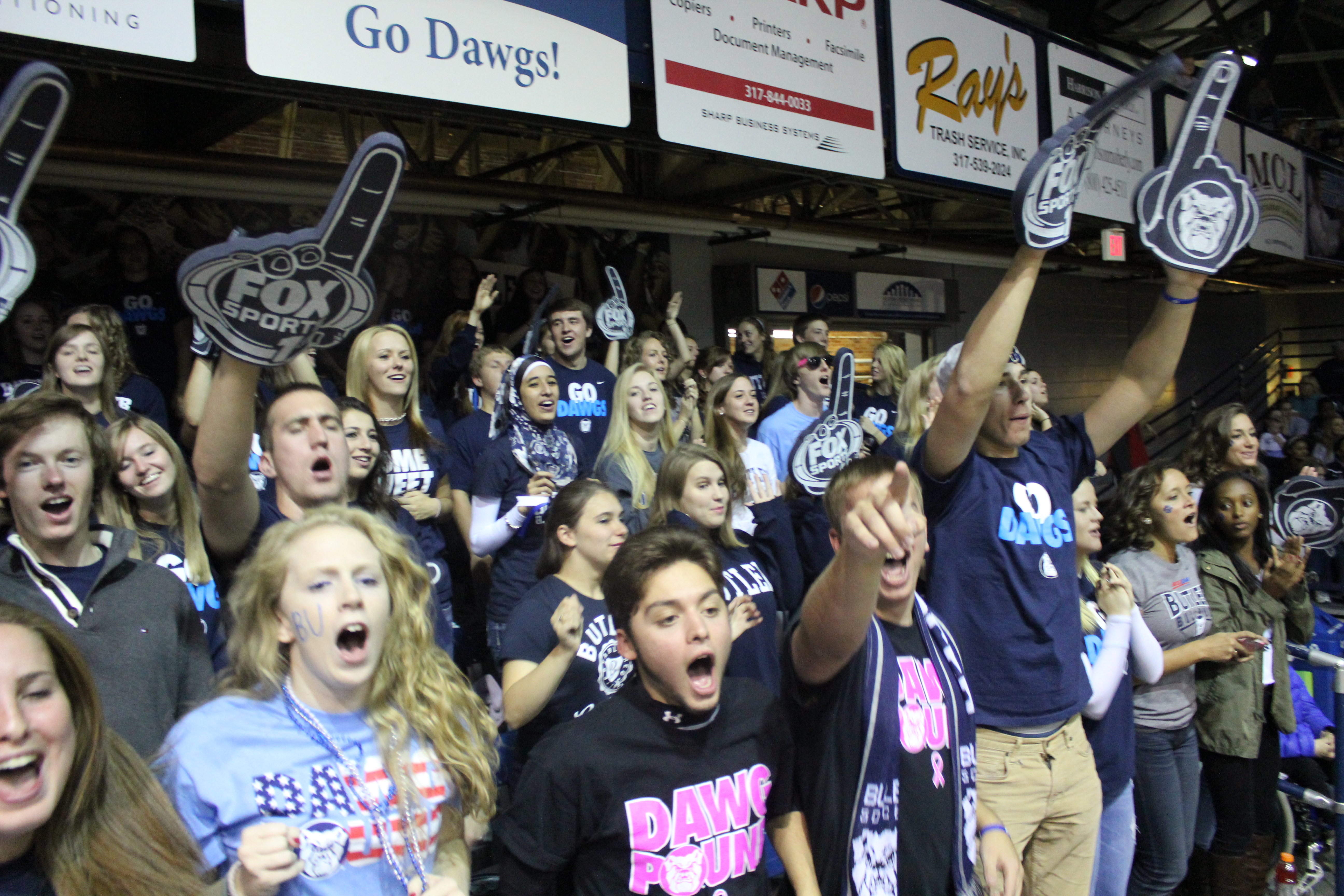 On a sold out night at Hinkle fieldhouse, the chants from the Dawg Pound echo off the brick interior.

A loud, cheerful and wild student section can have a major impact on an athletic team. Butler University’s version, the Dawg Pound, has grown over the past few years and is changing for this year’s men’s basketball season.

In fact, this season is the first time the organization filled every slot available after 1,000 students paid to be a part of the section. The freshman class, which is the largest class in Butler history at 1,200 students, occupies the majority of the slots in Dawg Pound and helped achieve this feat.

“This is the first time in the history of Dawg Pound where we have maxed out and had to turn kids away,” said Jack Griffin, Dawg Pound executive team member.

With the expansion, new measures were put in place to keep the group organized, involved and informed.

The game day giveaways available at select games throughout the season are one of the biggest draws to the Dawg Pound. The giveaways, which include t-shirts and pizza, are what the membership fees go toward. Students must show a punch card at the gate of Hinkle to receive these giveaways.

This change was in response to a problem the executive team dealt with last year.

“A problem we ran into last year was with some of the giveaways, some of the students that were getting them weren’t Dawg Pound, so that was why this year we gave out the new membership cards,” Griffin said.

The new executive team of Griffin, Taylor Deters, Tyler Williams, Olivia Carson, Kylar Hunt and Brendan King, who were appointed in the annual elections, worked to establish a new means of communication with their members to keep them involved in the group.

Now, everyone who signs up for Dawg Pound receives a weekly newsletter through email, and they receive updates every time new student tickets are available. The club also has its own Twitter, Instagram and Snapchat accounts (BUDawgPound for all three platforms) to connect and inform their members of giveaways and deals.

The new leadership hopes to raise attendance at more of the lower attended games by reaching out to the students via email and giving more reminders.

“We have done a much better job of keeping people up to date and getting the information to the students in Dawg Pound,” Griffin said. “This year we have expanded our marketing to a weekly email, more office hours, and updates through our social media.”

A major difference between the fan section and ones at other colleges is at Butler it is not just for men’s basketball. Dawg Pound holds events for nearly all Butler athletic teams and sponsors bus trips to key away games near campus.

Even though there has been substantial change, its members are excited and anxious for the new season.

Griffin Brugh, junior and three-year member, said he believes the new changes will benefit the club.

“The changes definitely give more of an incentive to join Dawg Pound,” Brugh said. “I know there were some problems last year with people not in Dawg Pound taking the giveaways and shirts, so it’s great that they are addressing that issue.”

With the higher number of memberships, Griffin said he hopes that the attendance rises for games that historically draw a smaller crowd.

“Participation for every game is huge,” Griffin said. “We sell out for top tier games like Xavier and Villanova, but there are some games where we barely fill the lower bowl which looks kind of bad when you’re watching on TV. We hope to see the overall participation rise.”