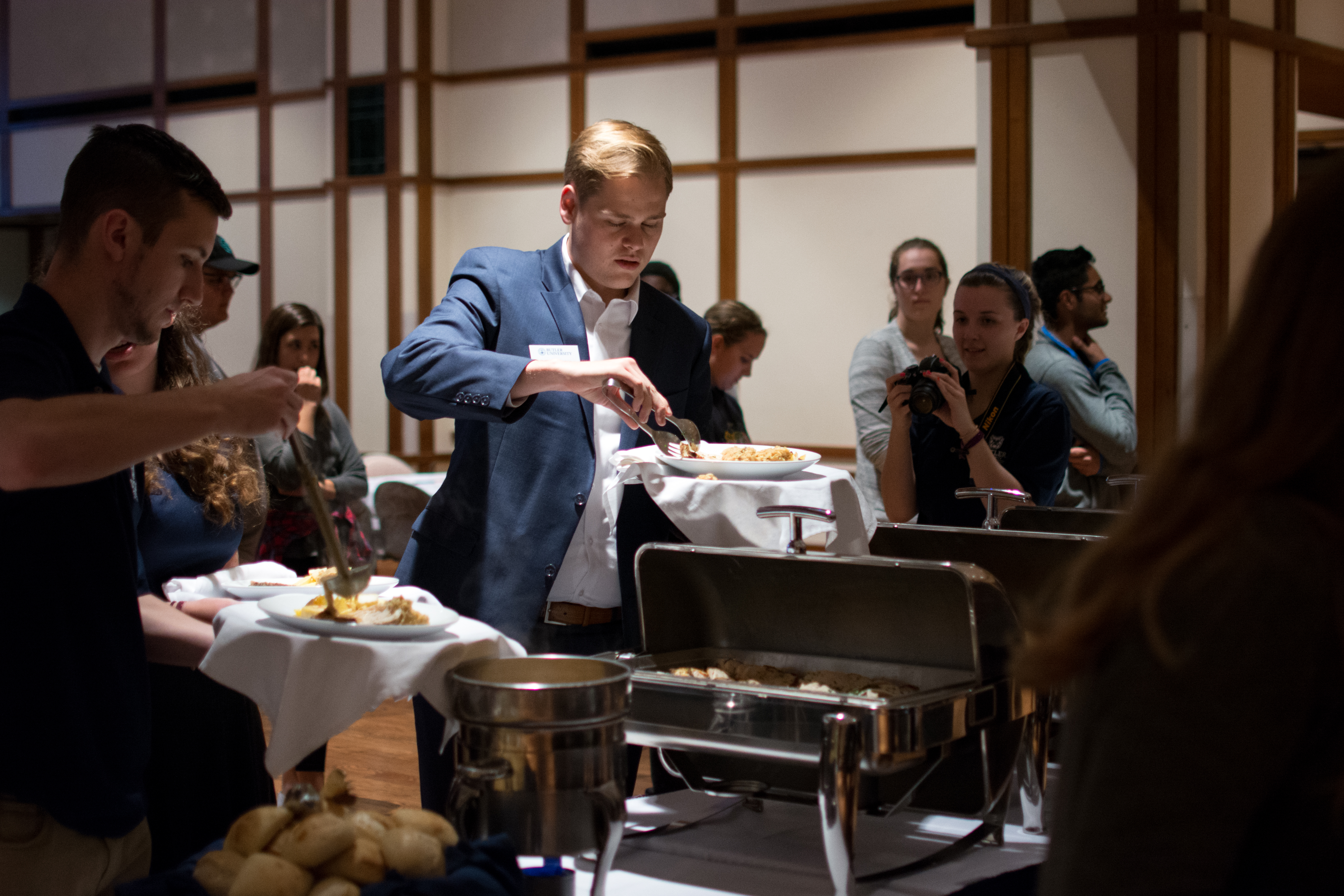 The Volunteer Center hosted an Oxfam Banquet last Friday, Nov. 11 in the Reilly Room to raise awareness of hunger in the Indianapolis area.

Butler has hosted the Oxfam Hunger Banquet for the past six years, though this was the first time it counted as a Butler Cultural Requirement for students.

The Volunteer Center paired with Butler Dining Services to offer students the opportunity to donate up to five of their flex dollars, money first-year students can spend at Starbucks, C-club and other on-campus locations, for the first time in the banquet’s history at Butler.

At the end of the evening, more than $500 was raised from student flex dollars. With over 200 attendees at the banquet, Butler Volunteer Center deemed it the most successful one yet.

Sam Thomas, student director of the Volunteer Center, said he was very excited about the banquet.

“The visualization this banquet gives the students is very cool,” Thomas said. “It tears down the walls of the image of hunger.”

Eric Davidson, the Volunteer Center events coordinator, helped plan the banquet for the first time and was incredibly optimistic.

“Seeing all of these students sets my heart ablaze,” he said. “It’s so good to see all these people who care.”

Upon entry, guests were randomly assigned a table and at each seat of the table was a slip of paper face down. These sheets contained information about a character who is living in the Indianapolis area and explained income level and a backstory on the character.

At one point during the event, Davidson asked those of each income level to raise their hands. The majority of the attendees were low-income individuals. This distribution of the income levels represented the distribution of classes in Indianapolis.

First year Emily Thomas said she was shocked at her character’s backstory of domestic violence.

“I was in awe of the story I got,” she said. “Domestic violence is something that’s too common in today’s age and I didn’t realize how hard it is to make a life for yourself after escaping a situation like that.”

Each level of income was served a different meal that reflected their character. The upper-class was served turkey and gravy, stuffing, a vegetable blend and a roll. They also had a choice of water or lemonade. They were served by the volunteers and had glass wear.

The middle-class went through a buffet-style line. They had rice and beans, green beans and a roll. They only had water for a beverage and served themselves on plastic wear.

The lower-class only received rice and water. They also went through a buffet-style line and had plastic wear.

This event is not unique to Butler. Oxfam is an organization created in 1942 by a group of Quaker intellectuals, social activists and Oxford academics.

Oxfam came together to help the large amount of refugees arriving in Greece after the second World War. After Europe returned to its normal state, the group changed directions to help others in developing countries.

In 1970, Oxfam America was founded. Oxfam America decided not to accept U.S. government grants and to instead try to build broad-based, grassroots support that would remain independent of government foreign policy.

Since then, Oxfam helps fight against world hunger on a worldwide level. Friday’s banquet was full of speakers and fundraising for this cause.