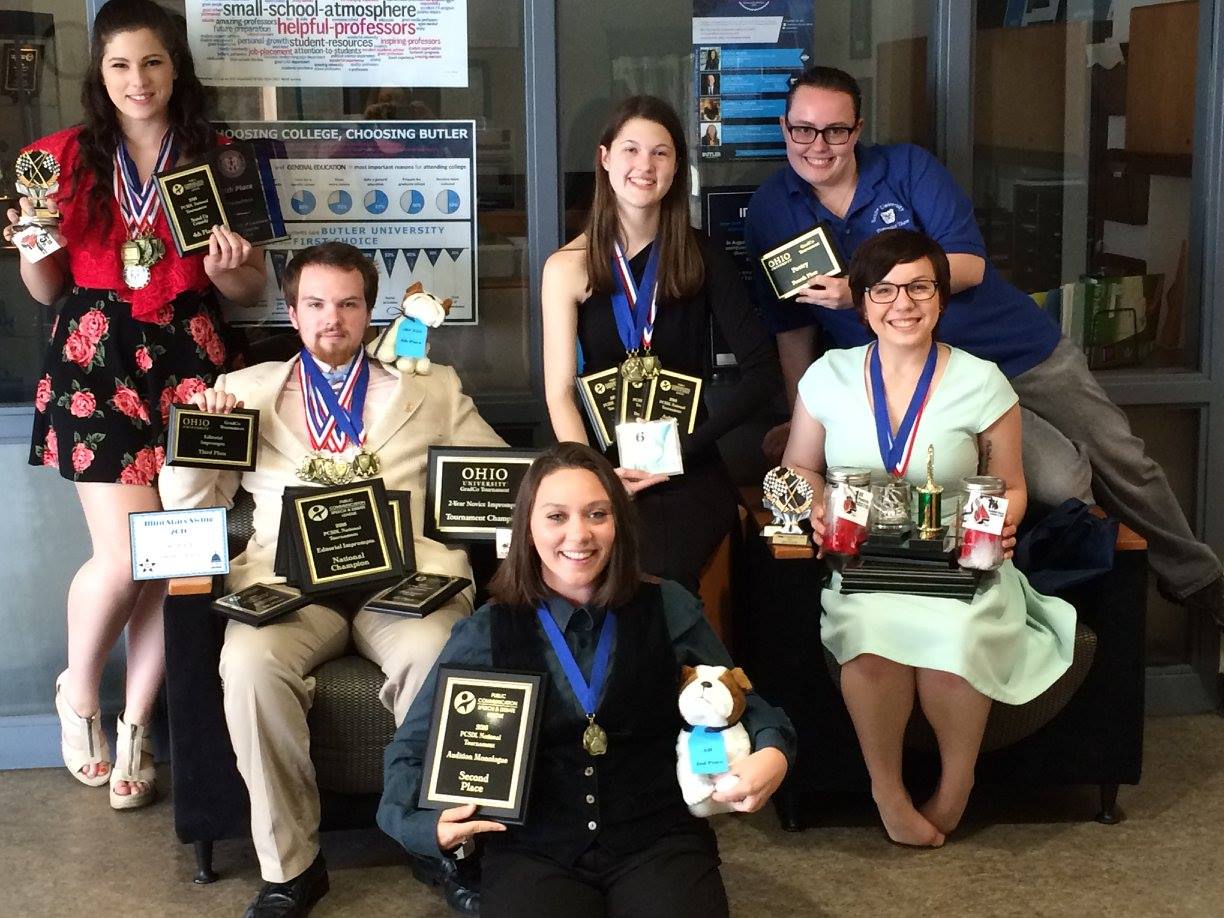 Speech and Debate teams can range from a single person to 30 or 40 students. Adding 15 competitors has lifted the Bulldogs from a small entry to an average-sized group.

Communication professor Janis Crawford has coached the team since 1989 and cannot believe the transformation the team has undergone.

“It is very exciting and crazy because we had six students last year and now we have 15,” she said. “I really have to have my schedule down when it comes time to making individual meetings.”

Butler hosts two tournaments every school year. One was last weekend on Sept. 24, and the next will be during the first week of classes in January. The January tournament is the larger of the two.

Aside from the two hosted by Butler, the team has traveled to tournaments across the country,  to states such as Illinois, West Virginia and Florida.

Tournaments usually last from 8 a.m. until 9 p.m. and the team travels to six to eight tournaments every semester. They typically leave Friday afternoon and come back Saturday or Sunday night, depending on where the competition is and how long it lasts.

Students who are going to three of these tournaments can also enroll in Crawford’s Speech and Debate class and receive credit hours. These students must participate in a certain number of required events at each tournament they attend. During the actual class time, students prepare for the events that they are participating in.

Senior team member Taylor Pearson is just as excited as her coach about the recent growth of the team.

“It’s really great to have more people because in the past, it has been hard to compete with the teams that have twenty or so kids. It is really exciting having this many people,” Pearson said.

Some of the strongest teams in the Midwest come from Western Kentucky University and Bradley University. Both teams are made up of about 30 students.

One of the aspects that makes Butler’s team different are the requirements for competing. Many of the larger schools, like Western Kentucky and Bradley, require students to compete in an event from each category. Butler’s team allows students to be more flexible and pick which events they enjoy.

The limited preparation events require competitors to speak on a prompt that is given to them just minutes before the event begins.

Public address events are informative and persuasive speeches that have been fully developed and prepared beforehand.

Interpretation events require participants to weave established works of poetry, prose and drama together to create an argument or tell a story.

“I like it because I have always enjoyed poetry in general, so that is the one I tend to specialize in,” she said. “I think that poetry is one of the most beautiful artforms that we have because there is so much emotion that goes into it, especially with slam poetry and spoken word.”

Pearson has been a part of a speech and debate team for seven years, going all the way back to her high school team, and said it is an important part of her life.

“I was starting to lose hope,” she said. “When I say that I do speech people automatically assume that I debate things, but it really is so much more than that. It made me think that forensics as a general art form is dying because so few people do it now as budgets are being cut in schools everywhere. For our team to triple in size over the past year is incredible.”

Pearson has been so involved with the Speech and Debate team because of the communication skills that she has learned along the way.

“While you will have a physical script in your hand, you are supposed to rely on the script as little as possible. The goal is to make the connection between the literature and the performance,” Pearson said.

Crawford thinks that the communication skills learned in Speech and Debate is the biggest benefit of being on the team.

“I’ve had kids that graduate and write me saying that it was one of the best things that prepared them,” Crawford said. “I’ve had students that have gone on to be lawyers or pharmaceutical salespeople, and no matter what they do after they graduate, speech sets them up to communicate to the best of their abilities.”