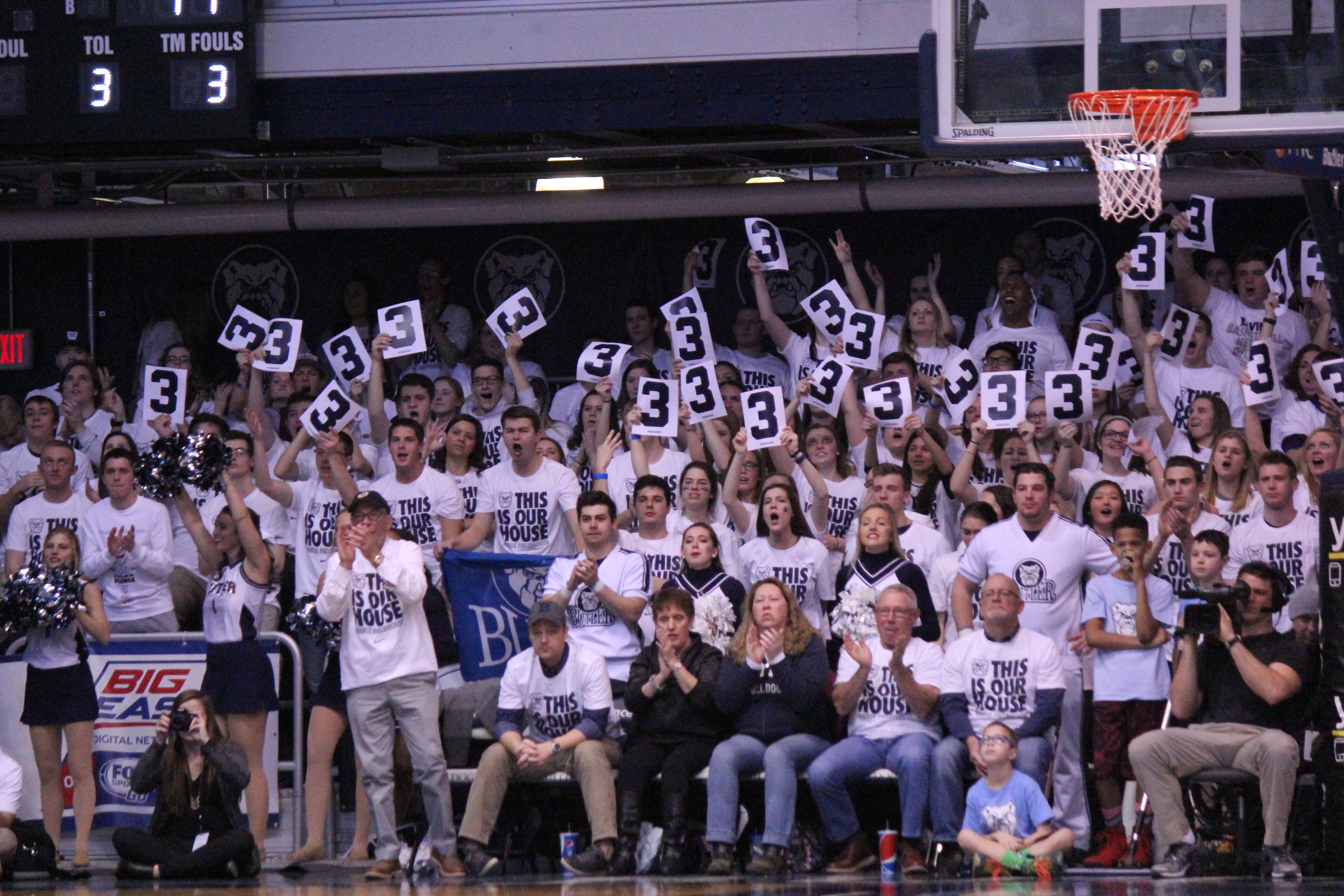 Butler men’s basketball games has two sections for students called the Dawg Pound, and students get in for free. Photo by Jimmy Lafakis.

The enemy sleeps five feet away from me.

We’re roommates, and I suffer from little twinges of guilt, because I stay up late, and she does not; because my alarm goes off in the morning a little louder and a little stronger than it should.

But it’s funny, the way our relationship works, how quickly guilt subsides when I pass by her Green Bay Packers jersey. It hangs in her closet, and shares a wall with mine, the green and gold trim opposed by the Chicago Bears jerseys folded on my side of the room.

Sundays are game days in my room. The walls are thin, and I can hear Jordy Nelson’s name travel into my room, broken by shouts of “yes!” and “touchdown!” There are two voices, and when I hear someone jump on the couch, I know my second roommate has joined.

I’m a Chicago Bears fan living with not one, but two Green Bay Packers fans.

My weeks are interposed by light quips and ribs between division rivals — a strategic offense and defense of words. From my living situation, a theory begins to emerge.

College is the greatest — and worst — place on Earth for sports fans. If SportsCenter created a four year-long mashup of the top ten and not top ten plays, the result would be college.

Butler first-year Rachel Vandivier has not yet sat in the student section during a Butler basketball game. She said it’s something she has looked forward to since she got on campus and emphasized how the school’s underdog reputation brings out the best in fans.

Junior Harry Winter learned to navigate the ups and downs of trying to balance watching his teams while being a full-time student. This includes watching hockey games with his roommate, a Minnesota native. Winter, on the other hand, is a Chicago Blackhawks fan.

“Last year wasn’t so good because we lost to them in all five games, but it’s a lot of fun when they’re playing each other,” Winter said. “We always try to make it back to the apartment to watch together.”

My theory is in no way backed by science. It’s the result of stringing together anecdotes from my college experience as a sports fan thus far, and what I see my peers going through at the same time. It begins with what makes college great.

1. Sleeping with the enemy

Suddenly, the massive wave of indistinguishable green and gold Packer fans I see on TV have a face, and they’re more similar than maybe I’d like to admit. I see it in the way my roommates plan homework assignments to schedule time for the Packers games. Or how Aaron Rodgers’s Hail Mary pass against the Detroit Lions is revered, sharing a sentence with words like, “miracle,” and “all that is good and pure.” I see my own antics as a sports fan reflected in their actions. The struggle of rational over irrational — of caring too much and understanding that a win or loss isn’t necessarily a life-changer.  I live with the enemy, but I wouldn’t call them that. Living with them, I don’t feel so crazy. If that’s not a good reason to celebrate, I don’t know what is.

I’m not sure there’s a faster way to instantly bond with someone than through sports. You both know exactly where you were sitting the night your team clinched the division series in some ridiculous, over-the-top, edge-of-your-seat-fashion. “You were at that game? Great, tell me all about it. Take me with next time?” Game days are spent in dorms, preferably hosted by whoever owns the largest TV, because your team was meant to be watched on a big screen. Season-ending losses are a burden shouldered together, because no one should have to go through rejection and denial alone. Twenty years from now, when you’re watching the same team with the same friend, people will ask, “Where did you two meet?” College.

3. Representing your team colors on campus

If your team had a big win the night before, chances are you’re reaching for your LeBron jersey or Cleveland Cavaliers T-shirt the next morning. You might get some looks from a Golden State follower, but this is college, and you’re free to wear what you want. If you want to bask in the glory of your team’s victory for a few hours longer, go for it. Here you’re not restricted to the 9-to-5, suit-and-tie clothes or navy blazer and dress pants. On a college campus, no one is stopping physician assistant majors from wearing a Tom Brady jersey to organic chemistry. But once you graduate, good luck fitting that underneath scrubs. Personally, I’d recommend investing in a red and blue stethoscope. Or at the very least, equip your wardrobe with Patriots socks for post-laundry days when you’re too lazy to find matching dress socks.

4. Other teams exist, and that’s a good thing

I had no idea what Tottenham soccer was before I came to college, something my friend was quick to remedy after we met in First Year Seminar. Soon, he had TV and futon rights in my room when the Tottenham Spurs had a game at 5 in the morning. (Coordinating time zones with England is hard.) Every fan has a sport that is out of their depth, but college friends will change that. After all, college is all about going out of your comfort zone. Plus, rooting for more teams increases the chance that at least one of them will have a winning season. This situation is ideal for anyone who doesn’t like to lose in numerous sports.

We’re broke college students, but I don’t think anyone needs to be reminded of that. Still, we get to attend quality sporting events for free. How many other places are you able to see a nationally-ranked soccer team with a flash of your student ID? Yes, skeptics will claim tickets aren’t technically free because we pay several hundred dollars in student activity fees every semester, but so long as I don’t have to whip out a credit card or cash, it seems free to me. If only the Butler student ID retained its power off-campus and into Madison Square Garden. Let’s not forget about basketball season. The student section means decking out in blue with friends, the occasional free T-shirt and watching your peers do what they do best on the court.

The not-so-great aspects of college and sports are equal to on-field blunders, the ones that become viral for being hysterical and painful to watch all at the same time. You can’t help but wince at the belly flops and shortcomings of people just like you. Life just wouldn’t be the same without them. College just wouldn’t be the same without the occasional things going wrong. What struggles would you have to tweet about.

1. Trying — and failing to watch your team on TV

Not being able to watch every Chicago Cubs game in my dorm never occurred to me until the first few weeks of my first year. Rationally, I know there are 162 games in the regular season. I also acknowledge I don’t have to watch all of them. Maybe if I kept that in mind I wouldn’t have accidently downloaded a virus after trying to stream a game on my laptop. Twenty-four hours and a frantic trip to the IT desk later, I learned my lesson. The only thing my parents said about the whole affair was advising me to wait until until a bigger game before illegally downloading a game. Unless you’re willing to pay for the MLB or NFL package, chances are you’re in the same boat as everyone else on campus and stuck waiting for nationally televised games. But does that make you a true fan? Where’s the loyalty if you’re not willing to risk a computer virus to watch your favorite team?

If you were lucky enough to get tickets for games, you can forget about going once you’re in school. And if you’re like me, your mom went to game five of the Cubs playoffs in your place, even though she thinks a run scored is the same as a point in basketball. It hurts a little when you can’t be there to support your team.

3. Homework is a real thing

In college there’s this thing called homework. It comes in various forms — papers, Moodle posts, and all of them have due dates. Sometimes it gets in the way of watching sports.  I’m sure professors would be happy to schedule assignments around games, but the only thing stopping them is the fact not every student watches the same team. That and the fact that our education doesn’t revolve around sports. While that’s a positive, it doesn’t always feel that way when you’re cramming school work in to watch the last quarter of a game.

To the sports fans living on a college campus: don’t despair when you can’t watch every game of the season. Going to live Butler sporting events makes up for all of that. If you happen to get a virus trying to watch a game, don’t panic. It’s happened to the best of us. The best games you watch will be spent with friends, so don’t hesitate to start a conversation with the stranger wearing your favorite player’s jersey in Atherton. And keep an open mind about people wearing the colors of your division rivals. Who’s to say you won’t be living with them next year? You might get as lucky as I did.