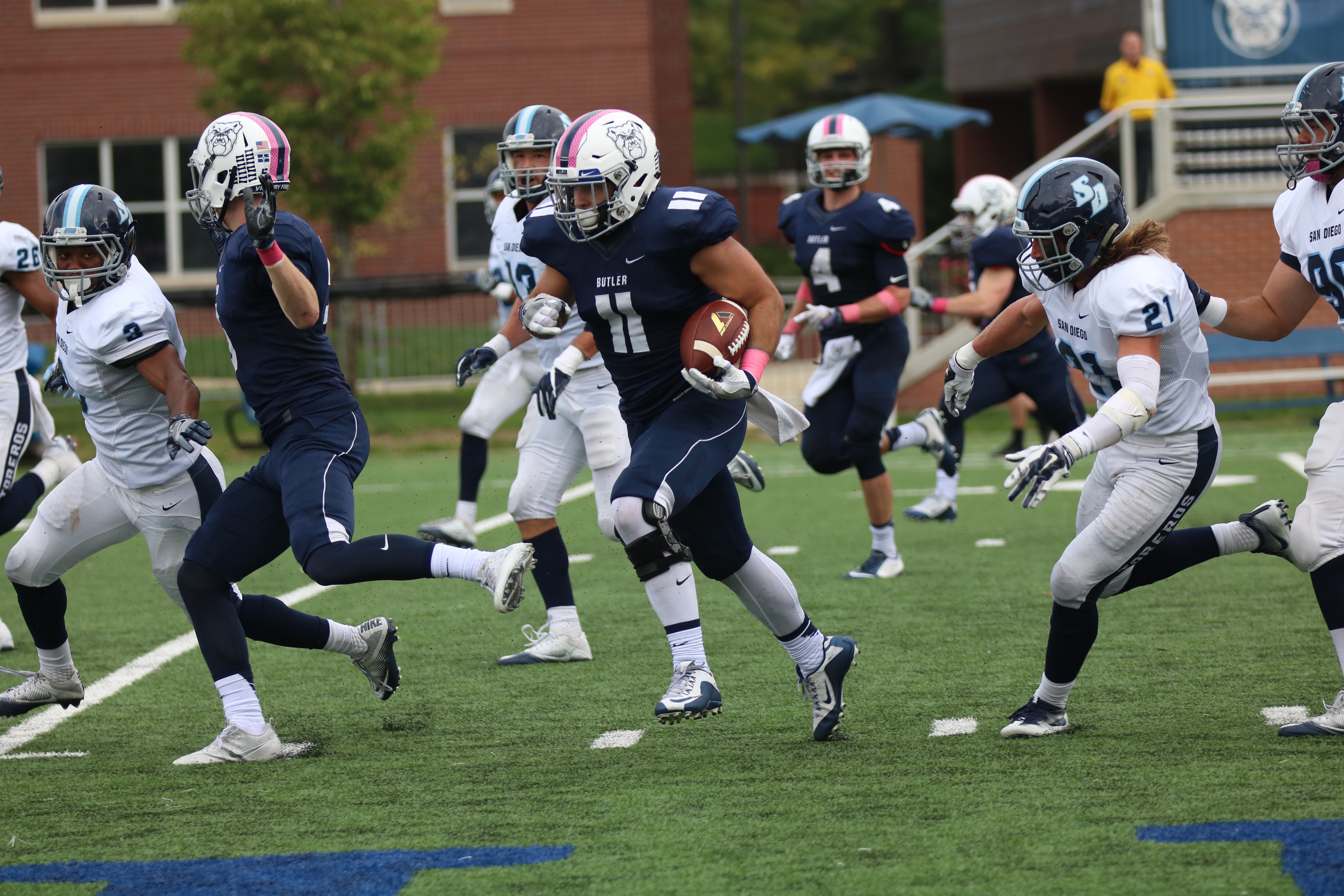 Redshirt junior running back Sam Schrader runs the ball in the Oct. 1 game against University of San Diego. Photo by Jimmy Lafakis.

The Butler University football team fell on Oct. 8 at the Butler Bowl to Marist 30-21 for their fourth loss of the season.

The Red Foxes used 10 fourth-quarter points to win the game and spoil homecoming weekend for the Bulldogs despite quarterback Will Marty throwing for a career-high 314 yards.

The defenses proved to be solid on both sides early on, as neither side could get anything going. The early stalemate was highlighted by a blocked field goal by Butler’s redshirt-sophomore Mike Cerone.

Butler was able to strike first near the end of the first quarter with a five-yard touchdown pass to redshirt-junior tight end Cord Collier. Marist countered with a touchdown of their own early in the second quarter before Marty connected again, this time with sophomore Pace Temple to put Butler up 14-6.

Temple led the Bulldogs in receiving, catching seven passes for 110 yards and a touchdown.

Head coach Jeff Voris said that Temple’s success comes as no surprise to him given his work ethic.

“Pace is as competitive as they get,” Voris said. “He’s got a ton of natural ability, and works as hard or harder than anyone we got. That’s what’s gotten him to where he is, is his love of the game and his drive that he has to work at it.

Marist cashed in on a number of Butler penalties to help them score the last 14 points of the half, giving them a 20-14 lead.

Butler finished the day with 13 penalties for 111 yards.

Redshirt-senior Sean Horan said the penalties can add up during a game.

“Penalties can have a big impact in the game,” Horan said. “We were climbing a wall and making it tougher for ourselves. It’s going to impact the game if we keep doing it over and over again and that’s what we did.”

The Bulldogs were able to take the lead back to open scoring in the second half on a one-yard touchdown run by redshirt-junior running back Sam Schrader, giving them a 21-20 advantage, but that would be all the points Butler would put on the board for the afternoon.

A field goal followed by a 37-yard touchdown pass from Mike White to Juston Christian put the nail in the coffin for the Bulldogs, bringing the score to 30-21 where it would finish.

With the loss, the Bulldogs fall to 2-4 on the season and 0-3 in the Pioneer Football League. Marist brings their record up to 2-3 for the season, and is an undefeated 2-0 in conference play.

Butler will next travel to North Carolina to take on the Davidson College Wildcats on Oct. 14. The kickoff for that game will begin at noon.

Horan said their mentality during the week could help them come out with a victory against the Wildcats.

“We have to attack this week with the mentality that we’re going to go 1-0 this week because the game in the current week is the most important game of the year,” Horan said. “That’s what our coaches say, and I think if we take that mindset into practice, into every single lift and meeting, then we’re going to win on Saturday.”