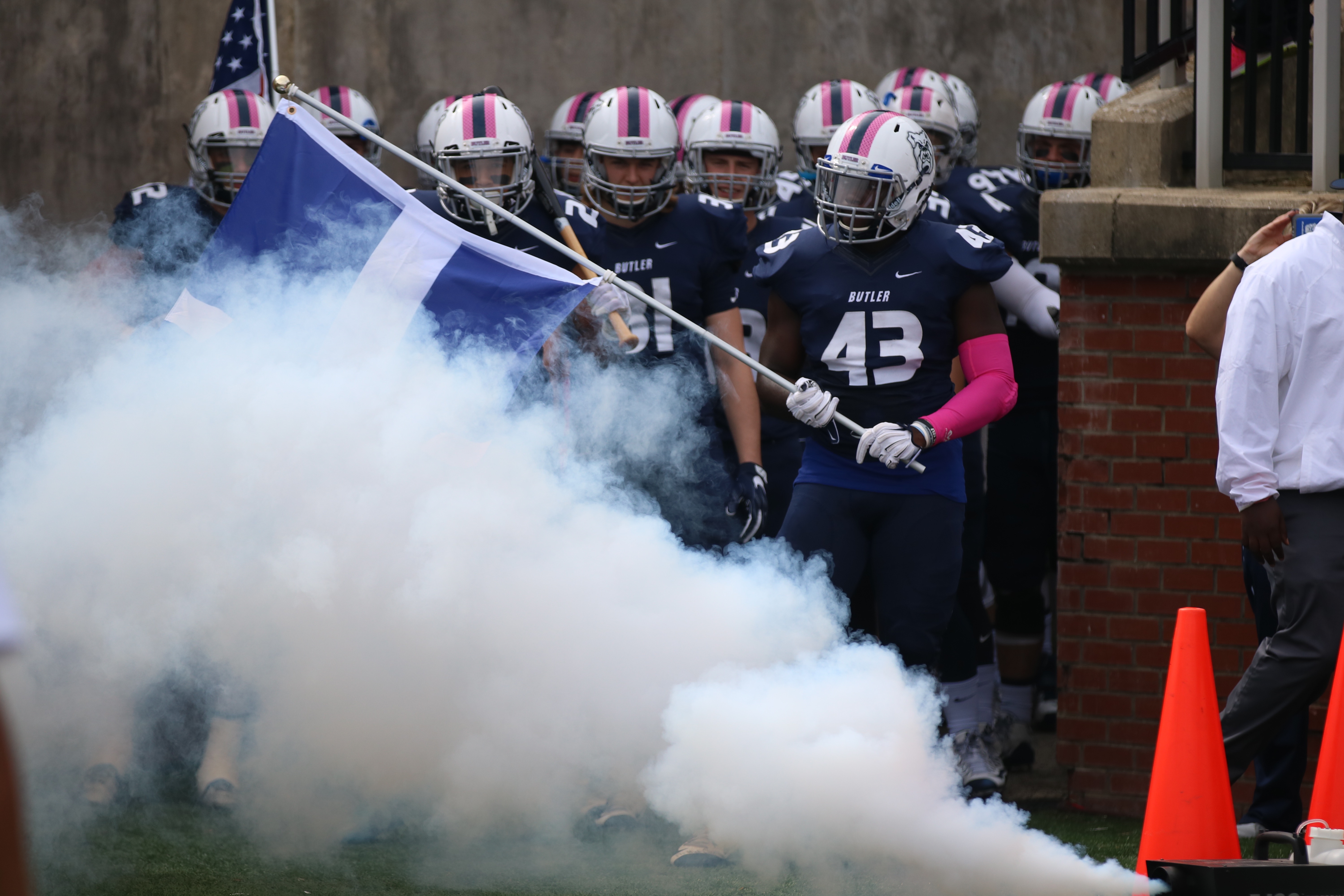 The Butler University football team prepares to run into the Butler Bowl before their Game against University of San Diego. Photo by Jimmy Lafakis.

The Butler University football team struggled against the offensive power and efficiency of University of San Diego, falling 44-10 on Oct. 1.

After playing in just the second home game of the season, the Bulldogs are now 2-3 overall, and 0-2 in league play. San Diego’s record against Pioneer Football League opponents jumps to 2-0 this year.

Butler head coach Jeff Voris emphasized the need to improve on all sides of the ball.

“We’ll go back to the drawing board and watch the tape, learn from it and come up with a plan moving forward that gives us the best chance,” Voris said.

The visiting Toreros moved fast, scoring a touchdown with their first possession in a 92-yard drive.

Butler’s offensive line was led by redshirt sophomore Will Marty in his first career start at quarterback. Efforts would fall short for the Bulldogs, ending with a 7-yard gain.

Will Marty gets the start under center for the Bulldogs today. He and the Bulldogs begin this drive at the 24.

After Butler failed to convert yards into a scoring opportunity, San Diego would strike once again. Anthony Lawrence’s pass flew for 32 yards before reaching the arms of Brian Riley for six points.

Butler was down 14-0 at the end of the first quarter.

San Diego ended their first possession of the second quarter with a quick 35-yard field goal for three points. Butler’s offense seemed to make progress before scoring attempts were thwarted by an interception at San Diego’s 29-yard line and fumble at San Diego’s 48-yard line.

Butler gets down to the USD 37, but the drive ends with an interception. Toreros take over at the 29. Still 17-0

Down by 17, the Bulldogs’ first points on the board would come from a 23-yard field goal from freshman Drew Bevelhimer in the third quarter.

However, the team was unable to stop a succession of San Diego touchdowns, creating a 37-3 deficit for Butler.

Butler’s sole touchdown came in the last seven minutes of the fourth quarter. Under pressure, Marty shoveled the ball to tight-end Cord Collier for a 13-yard touchdown.

Redshirt senior Malcolm Weaver took over as quarterback in the last few minutes of the game. A sixth touchdown from San Diego wrapped the score up 44-10.

The Bulldogs are now 5-16 against San Diego, dating back to 1993. Voris called San Diego a “complete team,” performing solidly on all aspects of the game by making good decisions under pressure.

“It’s a challenge every time you play them,” Voris said. “You’ve got to make your break and take advantage of opportunities when they provide them, because there’s not many.

Moving forward, the team plays Marist College on homecoming weekend Oct. 8. Voris said the campus-wide energy is contagious, something the team will take advantage of.