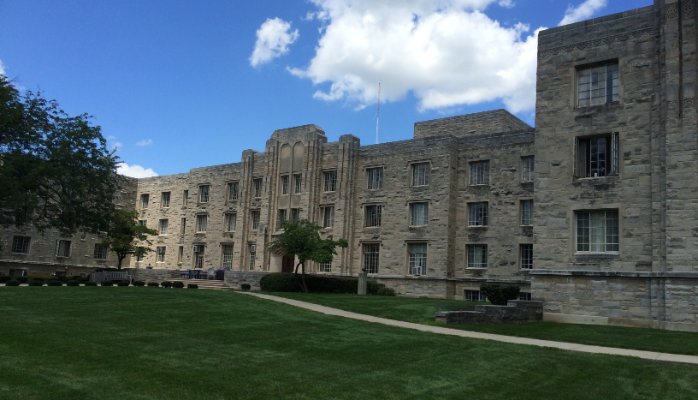 Current Schwitzer residents will be the last to live in the residence hall, as it will close and be demolished after this semester ends.

Rich Michal, executive director of facilities for Butler, said it makes more sense financially to tear Schwitzer completely down. It would have cost around $1 million to preserve the front facade. Though Michal said they will attempt to salvage as much as possible.

American Campus Communities, a university housing development company, conducted a study of Butler’s campus. Their findings showed it was not viable to renovate Schwitzer.

“It is obviously showing its age,” Bruce Arick, vice president of finance and administration, said at a faculty senate meeting in February.

Michal also said those working on the demolition hope to preserve some, if not all, seven entries to the building and reassemble them around campus.

“What’s interesting is that at the time Schwitzer was built, these fixtures were pretty standard,” Michal said.

Schwitzer Hall is not a historically protected building, like Hinkle Fieldhouse and Jordan Hall, so the building can be completely demolished.

In August, two options were discussed for Schwitzer’s remodel: completely tear it down or tear down the legs of the “U” and repurpose the front facade.

Schwitzer will come offline at the close of this semester, and the new building is projected to open for the fall of 2018.

The proposed dorm will be 4 stories tall, and it will be set closer to Hampton Drive, even with Residential College.

Kelly Murphy is a senior pharmacy major who lived in Schwitzer as a freshman. She said it is saddening to see a beautiful stone building being torn down.

“One of my favorite things about Butler’s campus is the gorgeous, old architecture,” she said. “Schwitzer is keeping with that style. It’s understandable from a financial standpoint to start over with the dorm, but I’d love to see the façade repurposed somehow.”

Schwitzer, as it stands, lacks Americans with Disabilities Act accommodations. Outdated dorms are also not appealing to prospective students.

“Students come to Butler not for our housing, but despite our housing,” Michal said. “We felt we should invest a little more money.”

“They have outlived their marketability,” he said.

The name for the new residence hall, or whether or not it will still be called Schwitzer Hall, is still up in the air. Construction will be funded through a private company, similar to Fairview.

Butler will lose $2 million of revenue from this arrangement, since the investor will see more of a profit before Butler does. However, after the contract ends in 45 years, the university could buy it back.

Arick also said he wants American Campus Communities to help the people currently employed at Schwitzer to apply for a new position at Fairview House.