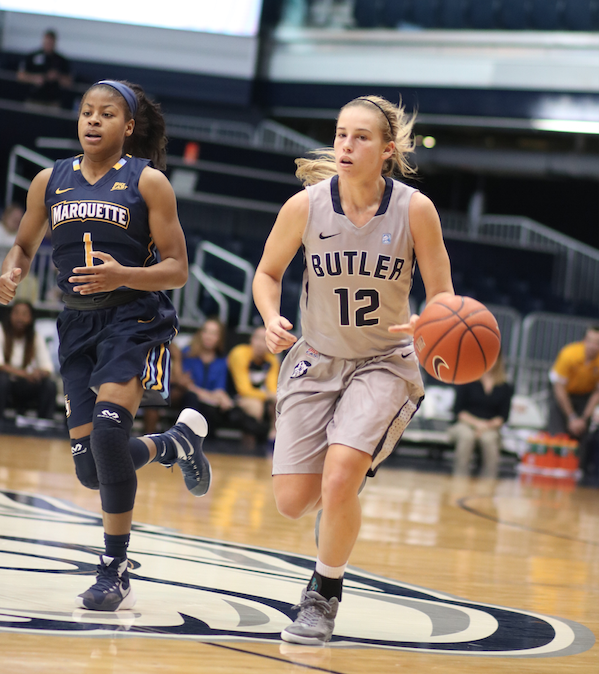 The Butler University women’s basketball team suffered an 80-64 loss to the second to last team in the Big East Conference, Marquette University, on Jan. 17 at Hinkle Fieldhouse.

Butler started the game with momentum. The team won the tip, and sophomore guard Sydney Buck scored the first three points of the game, giving Butler the early lead. As the first quarter continued, Butler increased their lead to five.

However, midway through the quarter, Marquette began to put a full-court press against the Bulldogs and went on a run, taking the lead from Butler. But as the end of the quarter neared, Butler took the lead back once again, only to lose it seconds later. Marquette held a 17-16 lead after the first quarter.

Both teams continued scoring as the second quarter played out. As the quarter continued, Marquette went on a 6-0 run to hold an eight point lead over the Bulldogs. In the closing seconds of the half, Butler shrunk Marquette’s lead and went into halftime down 32-27.

The third quarter did not start like Butler would have liked. Butler’s freshman forward Brittany Ward put the first points on the board for Butler nearly five minutes into the quarter while Marquette scored 11, giving them at a 43-29 advantage.

“We just didn’t come out with much energy [in the third quarter], and we weren’t playing as hard as we should have been,” Buck said. “[Marquette] came out and punched us in the mouth, and we couldn’t respond.”

The Bulldogs found some momentum in the final minutes of the quarter and shrunk the lead to 10 at the end of the third.

The fourth quarter started with a 3-pointer from Buck to put the Bulldogs within nine. In the next three minutes, Marquette went on a 12-2 run and never looked back. Marquette had a lead as large as 23 points at one point during the final quarter.

“We didn’t hit shots in the first half, and we came out sluggish in the second,” Ward said.

The team’s leading scorers, Buck and Ward, helped shrink the deficit to 16 at the game’s end, as Marquette pulled off a 80-64 victory. Both Marquette and Butler sit 7-11 on the season and 2-5 in the Big East. Going into Sunday’s game, Butler was ranked seventh in the Big East and Marquette was ranked ninth.

“Against good teams in our conference [this performance] isn’t going to work,” Ward said. “We’ve got to come out fighting and punching first every time.”

Buck lead the way for Butler with 21 points and three rebounds. Ward had 18 points and 17 rebounds. Also stepping up for the team was senior forward Belle Obert, who had nine points and nine assists.

The depth of Butler’s bench is going to prove important as one of Butler’s star players, freshman forward Tori Schickel missed her second straight game due to an undisclosed illness. Schickel averages just over 13 points a game and shoots at 48.9 percent from the field.

On Jan. 18, the Big East Conference named Ward the Freshman of the Week. In both games this past weekend, Ward scored a total of 37 points and 30 rebounds. Her 17 boards in Sunday’s game were three shy of the Big East freshman single-game record in conference play.

The Bulldogs are in action next weekend as they make the East coast swing, playing at St. John’s University on Friday at 7 p.m. ET and at Seton Hall University on Sunday at 2 p.m. ET. Both games can be seen live on the Big East Digital Network.