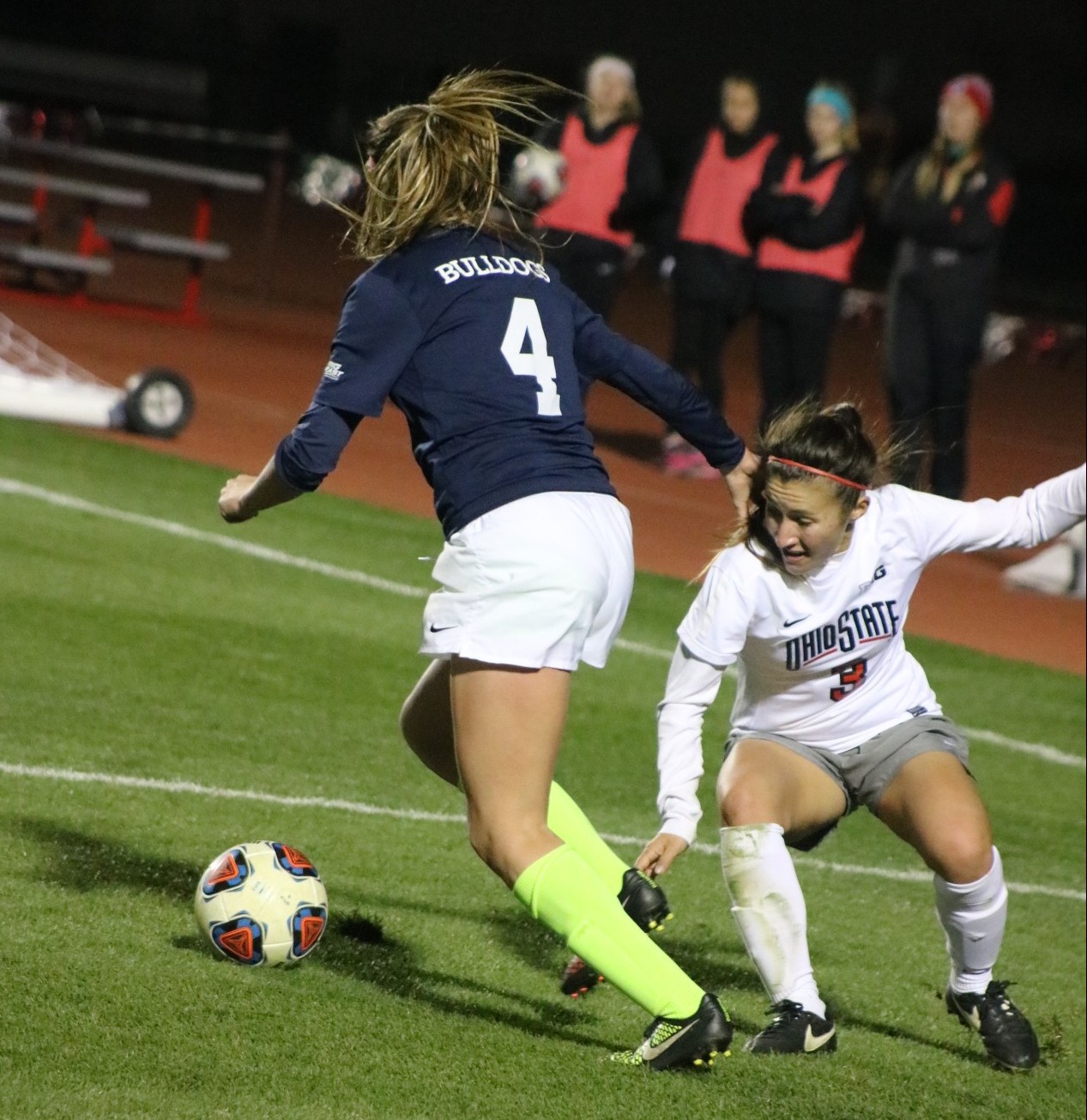 The Butler University women’s soccer team ended their first ever NCAA Tournament appearance with a 2-1 loss against Ohio State University in double overtime.

“Obviously a disappointing way for the season to end,” co-head Coach Rob Alman said. “It might have been a bit of an abrupt finish in double overtime. A ton of credit to Ohio State. We knew it was going to be a good game. It was definitely a tough battle.”

The first half proved to be a good game between two similar teams. Both Butler and Ohio State took their turn at controlling the game. The Bulldogs would run the game for a few minutes, and then Ohio State would take control and try to score. This constant back-and-forth during the first half created an exciting game for the nearly 600 fans in attendance.

Defense was an especially strong point for the Bulldogs, and something they spent a healthy amount of time on in their two days of practice before they left Indianapolis. Their work showed on the field Saturday night.

The Bulldogs were able to press the Buckeyes very hard. Pressing Ohio State forced mistakes that allowed Butler to capitalize.

Butler had their own struggles, too. They were unable to take advantage of their position when they were within shooting range. Butler seemed to struggle as their surroundings became more crowded.

Butler put five shots up on the board, and Ohio State had eight. Two of Butler’s shots were shots on goal, while only one of the Buckeyes’ was close enough.

Butler’s senior midfielder Sophia Maccagnone accounted for two of the team’s shots and one of their shots on goal. Freshman forward Paige Monaghan also had two shots, and sophomore defender Maria Collica had one shot, one shot on goal.

As the second half got underway, Ohio State stepped up their game and controlled much more of the game. The team was much more aggressive, and spent a lot of time near Butler’s goal. Although they had many opportunities to score, they were not able to take advantage of them.

With five minutes left in regulation, the Buckeyes’ redshirt junior defender Morgan Wolcott scored a goal after an initial shot bounced off the crossbar and was sent her way by sophomore midfielder Nikki Walts. The scoreless game was finally no more, and Ohio State lead Butler 1-0.

As the clocked ticked down in the remaining five minutes, Butler played aggressive and quick, trying to make magic happen. With less than 10 seconds left in the game, Butler found their magic.

Junior midfielder Serina Kashimoto got hit and fell to the ground. She and Maccagnone share free kick duties. Kashimoto encouraged Maccagnone to take the kick. With six seconds left, Maccagnone’s free kick went through the wall of players, past the goalkeeper and into the net.

“I thought of overtime) as a second chance, just to come out with a second wind,” senior midfielder Randi DeLong said.

Alman felt that the roles were reversed and that Wolcott’s goal gave his team new life.

“A lot of times, there’s kind of that crazy late goal, and everyone has that let down,” he said. “I think for us it was actually the opposite. We attacked the game and tried to go win the game. We created chances in the overtime period as well. There was a great deal of mental strength shown in that situation.”

Two ten-minute overtime sessions didn’t seem like they were going to be enough and that the game was going to go into penalty kicks. However, Ohio State had other thoughts.

With 3 minutes and 25 seconds left in the second overtime period, Ohio State’s sophomore forward Sammy Edwards shot an eight yard kick past Butler’s Card, securing the win for the Buckeyes.

The kick ended more than just the game, it ended Butler’s season. It was a season of many highs and few lows. They shattered records and won over hearts.