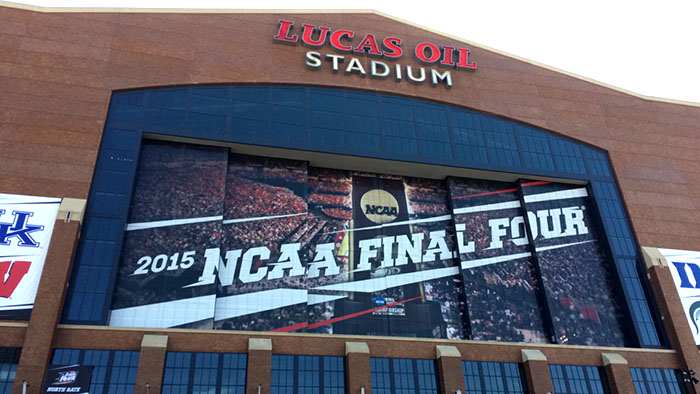 Here’s a recipe for one great weekend.

Take a local player — one that is seasoned with tournament experience, grit, CLASS, and a competitive edge — and throw him in a 3-point shootout in his home gym.

Then take another player from the same team and put him in an all-star game in the same stadium as the Final Four.

It works best when those two players come from a team that has just lost in the NCAA Tournament but still has a rabid, appreciative fan base. That team has also marinated for exactly five years in the success of a dramatic run to its first Final Four.

And just for a little extra flavor, mix all that in with four household names in college basketball, four wild fan bases and two incredible games.

All put together, I like to call it Final Four Indianapolis 2015.

And I had the chance to devour it this weekend, and, boy, was it tasty.

(Photo by Mike AndrewsParticipants of the State Farm 3-Point Championship. Gonzaga’s Kevin Pangos won the men’s contest and Portland’s Cassandra Brown won the women’s contest. She defeated Pangos in the Battle of the Champions.

On the five-year anniversary of the Bulldogs’ trip to the Final Four and Gordon Hayward’s near fairytale ending, Butler seniors Alex Barlow and Kameron Woods got to taste the glory of college basketball one more time.

The Women’s 3-Point Championship and Denny’s Men’s Slam Dunk Championship proved to be just as exciting with University of Portland’s Cassandra Brown and LaQuavius Cotton of Delta State University keeping the crowd energized even after Barlow was eliminated.

“Thursday night was unbelievable,” Barlow said. “It’s something I will remember for the rest of my life, getting the chance to compete in Hinkle one more time.”

Barlow said the standing-room only crowd was much more than he had expected, and he fed off it.

“Every shot I made, the place went nuts,” he said. “Every shot somebody else made, they booed. It felt like a game. It was honestly the third best atmosphere I’ve been a part of since I have been at Butler outside of the Gonzaga and Villanova (University) games.”

Woods took his turn at one last game Friday in the Reese’s All Star Game at Lucas Oil Stadium following an afternoon full of open practices and press conferences.

Woods scored just two points but pulled down a game-high 14 points. He represented the East team, which lost to the West 109-87.

Barlow stole the stage one last time Friday, however, as it was announced that he was the recipient of the Senior CLASS Award. CLASS is an acronym for Celebrating Loyalty and Achievement for Staying in School, and the award recognizes four areas — community, classroom, character and competition.

He became the first Bulldog to win the award.

“The Senior CLASS Award meant a lot to me,” he said. “To be recognized by not only the fans, who I am thankful for all their voting, but also the coaches and media, it means a lot to me.”

But obviously the main focus of the weekend: There was a national champion to crown. And there were four great teams in town duking it out — no pun intended.

(Photo by Kyle Beery) Tom Izzo (second from right) made his seventh Final Four appearance with the Michigan State Spartans. Three of them have been in Indianapolis.

Duke knocked off Michigan State in Saturday’s first game 81-61 in a pretty uneventful game, other than the emergence of Grayson Allen and lights-out shooting of Tyus Jones.

But the nightcap was one for the ages as No. 1-seeded Wisconsin upset the almighty Kentucky Wildcats. Bo Ryan’s Badgers used a 15-4 run over the final 4:28 of the game — and possibly a couple of helpful calls from the officials — to pull off the biggest Final Four upset since, well, possibly ever.

So the highly anticipated marquee Kentucky-Duke matchup never happened. But I have a feeling that what did happen Monday night was just as good as that game would have been. Everyone still got to see two great big men go at it.

But it was freshmen Allen and Jones who stole the show. Allen had 16 points off the bench and Jones had a game-high 23 en route to winning the tournament’s Most Outstanding Player award.

I think it’s safe to say that Monday night’s game can go down in the record books right next to Butler’s bout with Duke in 2010, Kansas’ 2008 thriller over John Calipari’s Memphis Tigers and Hakim Warrick’s block of Michael Lee as time expired in 2003 as one of the best National Championship Games of our generation.

Nowadays you can’t have a big sporting event without all kinds of other festivities surrounding it, and Indianapolis did a great job of that this weekend.

There were free concerts at White River State Park Friday, Saturday and Sunday, all which I heard were fantastic. Fan Fest at the Convention Center was a hit, and there was plenty of nightlife to keep a college kid happy.

It was certainly a weekend to remember. But I got one opportunity most didn’t. I got a media credential to attend the open practices, press conferences and All Star Game Friday.

I got to sit courtside for some great displays of athleticism and determination, even if only one team prevailed Monday night. The sheer amount of talent and youthful passion I saw on that floor Friday afternoon was something I will never forget.

It took the aura of Final Four weekend to another level getting to be that close to what so many people covet as the best weekend in sports, even if it was only practice, and not the actual games.

In the press conference I heard four well-respected coaches talk, and I was absolutely amazed. To be in the same room as them — two of them absolute coaching legends — was downright unbelievable.

Hundreds of other Butler students were able to take part in the weekend as well, volunteering at numerous events, including the Fan Fest.

The fact that we were presented this opportunity as students just makes Butler and this great city that much better.

So, as March Madness has officially come to a close and we gear up for NBA and NHL playoffs, I begin two countdowns. One, the seven months until college basketball is back.

The other, the six years until the Final Four returns to Indianapolis.