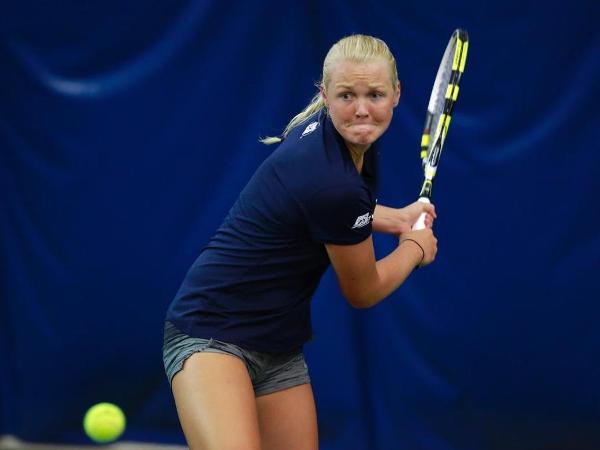 The Butler University women’s tennis team has a big weekend ahead with its final two matches of the regular season at home against Creighton University Friday and Xavier University Sunday.

The Bulldogs split a pair of conference games last weekend with a 5-2 win over Providence College Sunday and a 6-1 loss against DePaul University Saturday.

Now the Bulldogs must prepare for their next big step, the Big East Championships. The team is lucky enough to have home court advantage for this event, as Butler is the host for this year’s competition held at the Barbara S. Wynne Tennis Center April 23-26.

Sophomore Kylie Haviland has the second best record on the team this season at 7-13. Only freshman Bailey Padgett has a better record at 10-12.

Haviland is a transfer from the University of Northern Iowa and native of San Diego, California.

“It gets pretty tough being so far away from home, and I definitely miss my parents being able to be at all my matches,” Haviland said. “But my team has provided me with my home away from home. They are my source of support now, and I am very grateful to have a team so close.”

Haviland said the Bulldogs already have a better record than last season, but they are still motivated heading into the Big East Championships.

“Our team is finding more success than we did last year, and we are working hard to improve every day.”

As in many sports, being a part of the Big East Conference is not an easy road to pave. All of the teams are impressive, forcing the Bulldogs to perform their very best in order to defeat any opponent they face. No match is a simple feat.

The team is an incredibly diverse group of women coming not only from different places around the country, but also the world. In addition to different hometowns, all of the members have different interests and are all involved with different things on campus.

Haviland in particular has chosen to involve herself in Greek life here at Butler. She is a newly initiated member of Delta Gamma, an exciting new venture but in the eyes of many a crazy commitment.

“It is definitely challenging to balance my involvement in Delta Gamma while also being a full time student athlete. But they are both so rewarding that I’m willing to make sacrifices in order to pursue both.”

She is one of many new Greek student-athletes at Butler this year.