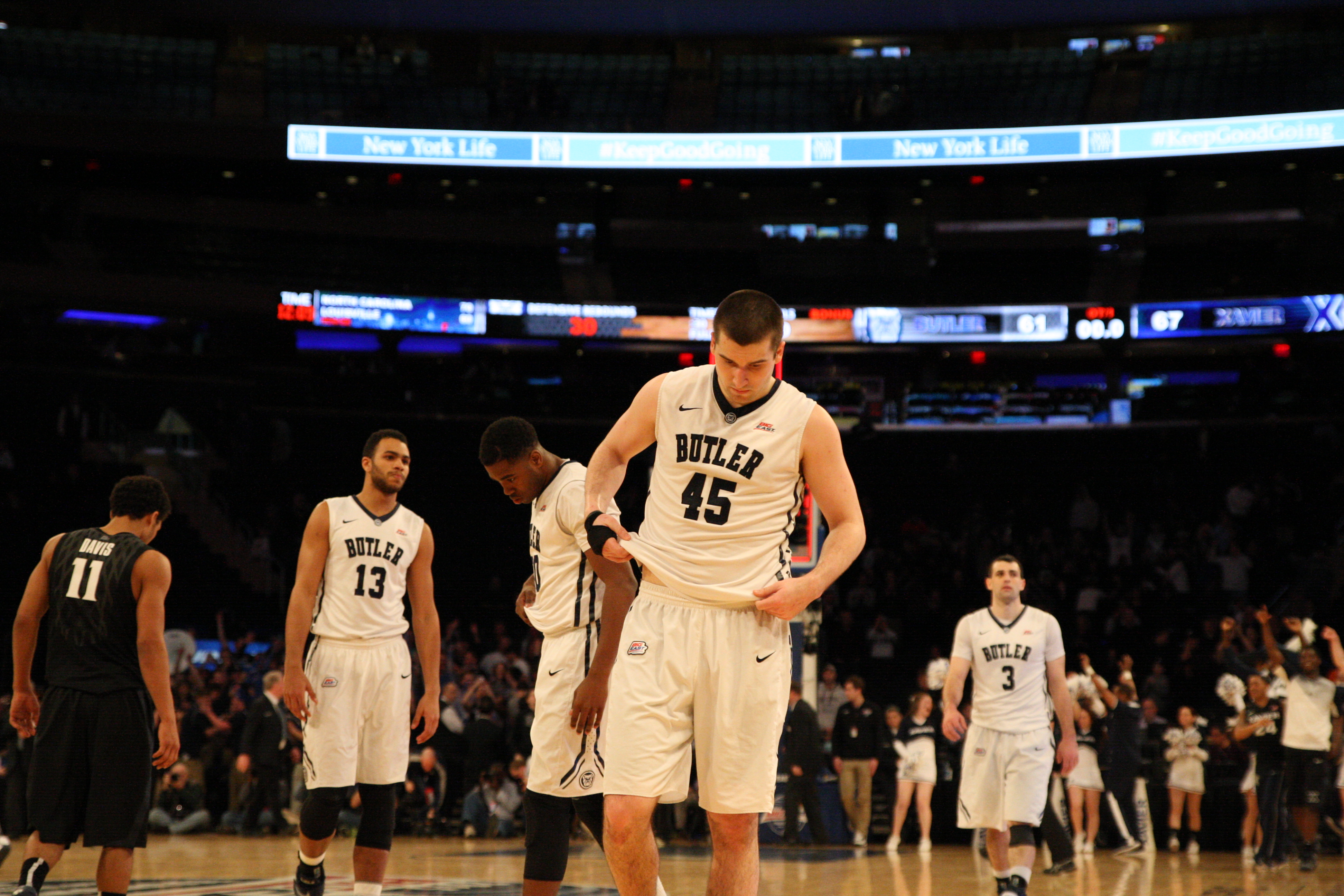 New York City was quite the experience, even if the Bulldogs only got to play one game at Madison Square Garden.

I have come to realize that my trip to New York was about more than me going to follow my school’s basketball team. I saw sights that I only dreamed of — the Brooklyn Bridge, the Empire State Building, the Statue of Liberty, Times Square, and my personal favorite, Madison Square Garden.

Not only did I go to the Garden, I got the full experience. I saw some great basketball games, and I got to wander the back hallways and passages of the “World’s Most Famous Arena.”

Thursday night after Butler lost, as I was having computer problems at 2 a.m., I decided to walk out on the MSG floor. It was just me and a handful of workers cleaning up garbage in the seats. That was a pretty surreal experience.

Out on the floor after by myself after Butler’s loss against Xavier Thursday.

Once I finished up my work for the night, in consolation of the loss, I wandered around the hallways, getting to check out the visitor’s locker rooms, pictures of famous people on the walls, and even the New York Rangers’ hockey goals.

But that wasn’t even the highlight of my Garden experience, as I thought it surely would be. I went to the Big East Championship Game Saturday night, and in front of a packed house, I was able to be on the court with a credential as the final horn sounded.

I was able to be on the court for the post-game celebration after the Big East Championship.

Now that all may seem pretty routine for any journalist in a major market, but as a college journalist just beginning my career, that was a pretty spectacular way to reassure myself that this is the exact career path I want to take.

Puke and rally. Give me some water. I’ve got a #BIGEASTtourney game to win. #GoDawgs pic.twitter.com/Lqxu0o82Un

And while the Bulldogs lost a relatively ugly game against Xavier, they set themselves up for a “puke and rally” of their own. Fans had high expectations heading into the Big East Tournament, but a loss certainly brought the fans down a notch.

But the Bulldogs will have an opportunity to rally as they head into the NCAA Tournament as a No. 6 seed. Butler squares off with No. 11-seeded Texas Thursday in Pittsburgh. America’s favorite Underdawgs could potentially face in-state foe Notre Dame, a No. 3-seed, in the second round, which would most definitely bring plenty of hype back to the team.

While you can expect much more extensive coverage on the Big Dance, at first glance, Texas looks like a pretty intimidating, yet beatable team with its size. Three starters over 6-foot-7 make them intimidating, but a low-scoring Longhorns offense paired with a stout Bulldogs defense could play in Butler’s favor.

As I mentioned, there will be much more to come in the next few days, but as the Madness of March officially gets underway Tuesday — as if it hasn’t already been for several weeks — in Dayton, one thing will be certain.

This team shouldn’t be taken lightly. After all, this tournament marks the five-year anniversary of Butler’s first magical run to the Final Four. And, oh yeah, this one just happens to be in Indy as well. And after Thursday night’s events, these Bulldogs have an empty stomach and are hungry for more magic.