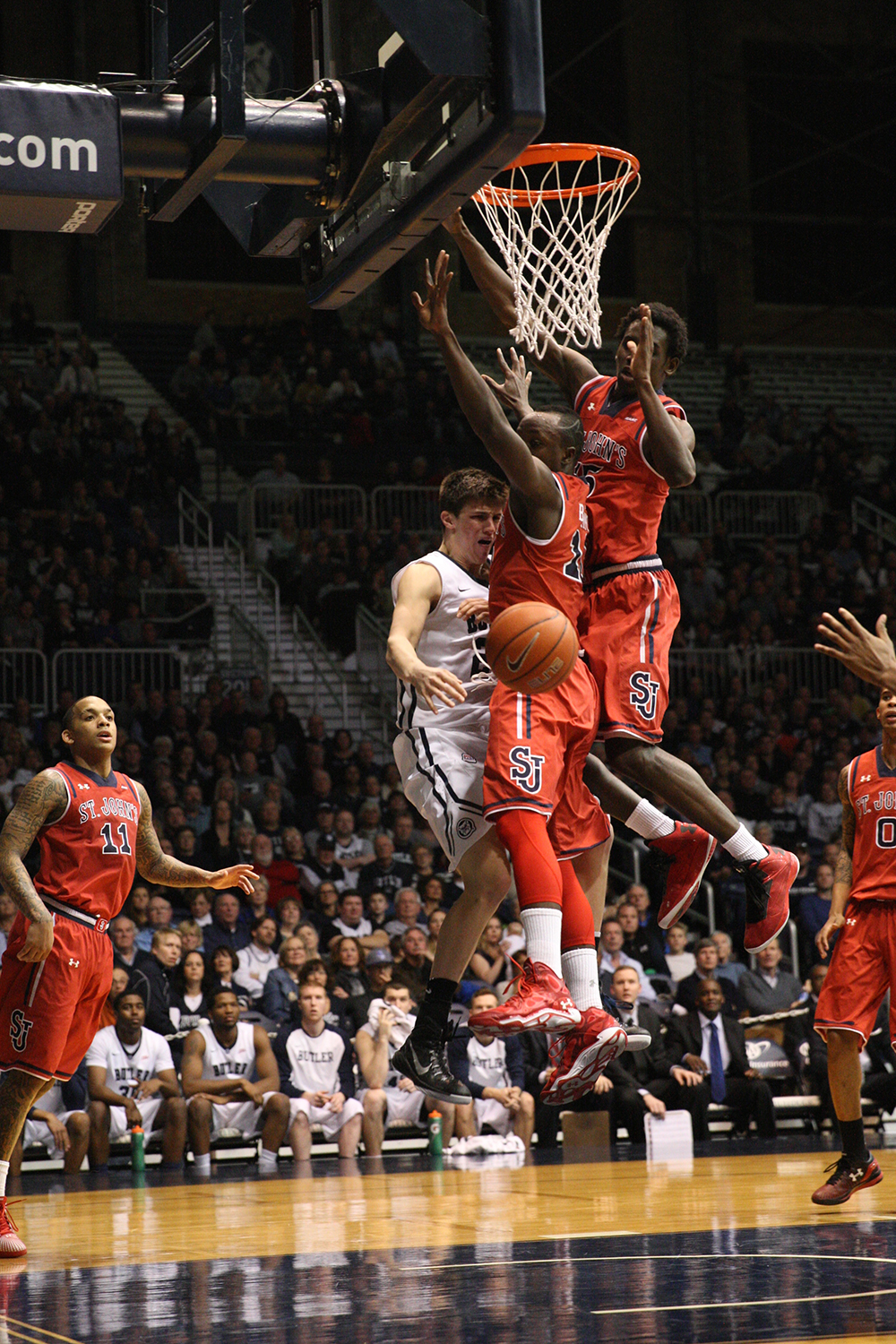 The No. 22 Butler University men’s basketball team is riding a four-game win streak after grinding out an 85-62 win over Big East foe St. John’s University last night at Hinkle Fieldhouse.

The Bulldogs improved to 17-6 overall and 7-3 in Big East Conference play, moving into a tie for second place with Georgetown University. They have won five out of their last seven games.

Junior Kellen Dunham paced the Bulldogs with 21 points, while senior Sir’Dominic Pointer had 19 for the Red Storm (14-8, 3-6) in what turned out to be a chippy game.

Midway through the first half, St. John’s junior Chris Obekpa threw an elbow at the back of Butler freshman Tyler Wideman’s head on a transition play, sending him to the ground.

After a long stoppage of play and a review by the officials, Obekpa received a flagrant technical foul – also known as a “flagrant two” foul – and was ejected from the game. He left with no points and just two rebounds.

That would set a chippy tone for the rest of the game.

Butler head coach Chris Holtmann said the game was a strange one in many ways.

“I can’t say it is the strangest game I have ever been a part of,” Holtmann said, “but it is probably up there with all that happened.”

He said it was a difficult one for the Red Storm as well.

“They arrived late, and had some travel issues with the weather,” Holtmann said. “I know they couldn’t get to their shoot around today, obviously the issue with Obepka, (so they are shorthanded).

“So, certainly, in some ways, I think maybe we didn’t see them at their best,” Holtmann said. “Having said that, I said before, going into it, I think they have a really high ceiling as a team, and would not be surprised at all to see them get on a run.”

St. John’s head coach Steve Lavin commended Butler for playing a complete game from start to finish and said he wasn’t surprised with how cohesively the Bulldogs played.

“(We weren’t surprised with) their sound approach, sustained effort and execution throughout the entire game,” Lavin said. “With that said, we were disappointed with our poise, our composure in a tough environment at Hinkle Fieldhouse against a good team.”

After a back-and-forth first half, the Bulldogs had a 36-28 lead at halftime.

Dunham said that was something Holtmann asked them to do coming out of the locker room for the second half.

“That was one thing that Coach Holtmann emphasized, was coming out and punching them in the mouth,” Dunham said. “The one big thing is, we can’t look too far ahead, and we didn’t.”

Holtmann said he was pleased with his team’s ability to play in that type of game.

“As I have been throughout the year, I was impressed with our guys’ – for the most part – poise in a game that was choppy, and a little difficult to get in a rhythm,” he said. “But I thought our guys played with enough poise, certainly in the second half.”

The Red Storm was able to claw back in the game through a series of small runs and small scuffles.

Pointer picked up a technical foul early in the second half, which led to a chorus of boos from the Hinkle crowd – one of many during the night.

Butler senior Austin Etherington then got a technical foul with just under 12 minutes to play, giving the Red Storm a little momentum.

St. John’s went on a run to cut the deficit from 14 to eight after Etherington’s technical foul, but that was as close as they would get.

Senior Alex Barlow had 15 points, five rebounds and three assists for the Bulldogs.

Junior Roosevelt Jones had 13 points, while senior Kameron Woods was the only Butler starter to finish the game in single digits. He had nine points and 12 rebounds.

Freshman Kelan Martin goes up for a dunk during Butler’s 85-62 win over St. John’s Tuesday night at Hinkle Fieldhouse

Freshman Kelan Martin chipped in nine points off the bench.

Sophomore Rysheed Jordan, who didn’t play against Butler in the teams’ first meeting, put up a team-high of 17 points. Senior D’Angelo Harrison (31 points in the first meeting) was held in check Tuesday, scoring 10 points. Harrison fouled out with 6:29 to play.

Saturday’s game will be the first meeting this season between the two teams. They split the season series last year.