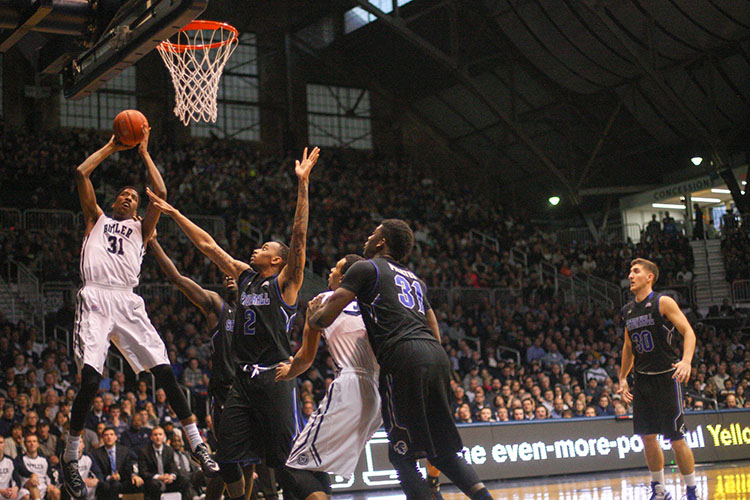 Fresh off getting drubbed 73-56 at Xavier University Saturday, one question looms over the heads of the No. 23 Butler men’s basketball team:

How much does this team miss Andrew Chrabascz?

“It is a question that I have been asked a lot,” head coach Chris Holtmann said. “We don’t want to make an excuse for how we performed. As good as Andrew is, we could have had four Andrews and struggled on Saturday because we just did not play with the kind of competitiveness we need to play with.”

Chrabascz broke a bone in his shooting hand in a 68-65 home loss against No. 6 Villanova University on Feb. 14 and has missed the team’s two games since. The Bulldogs are 1-1 without him in the starting lineup. Chrabascz started all 25 games before his injury.

Holtmann said the Bulldogs will rely on the team’s young talent against Marquette the second time around, which has become the norm during Chrabascz’s absence.

Freshman Tyler Wideman has started the last two games in place of Chrabascz, who is the Bulldogs’ third-leading scorer with 11.1 points per game. Wideman has had a tough time filling his shoes. He has scored four points, grabbed four rebounds and dished out four assists in those two games.

Holtmann said he is sticking with Wideman in the starting lineup.

“He gives us another big body that we don’t have otherwise,” Holtmann said. “We are not the deepest team, and I think that our guys understand that this is a great opportunity for them to step into an increased role. And I have full confidence that they can do that effectively.”

While Holtmann and his staff are looking to the freshman to step up and fill the void, it was the team’s veterans that lifted the team to a 58-56 road win over Creighton University Feb. 16.

Junior guards Kellen Dunham and Roosevelt Jones led the team in that game with 19 and 18 points respectively. Jones came up big for Butler, hitting a game-winning floater with 1.9 seconds to play.

Sophomore F Andrew Chrabascz is out with a broken bone in his shooting hand, suffered in a 68-65 home loss against Villanova on Feb. 14.

Senior Kameron Woods said after the Creighton game the Bulldogs are capable of winning without Chrabascz.

“It was a confidence boost for how we are going to be able to play without Andrew in the lineup for a while,” Woods said.

But Saturday’s performance in Cincinnati showed that the Chrabascz-less Bulldogs are a vulnerable team.

The Musketeers outscored the Bulldogs 36-28 in points in the paint and held a slight 39-35 rebounding advantage.

Anderson and the team’s leading scorer Matt Carlino (14.5 PPG) did not play Saturday in an 87-76 home loss Saturday against Villanova. Whether they will play in tonight’s game is questionable, according to online reports.

If Anderson does not play, he will likely be replaced by 6-foot-7 Steve Taylor, Jr.

Taylor had seven points and four rebounds in place of Anderson against the Wildcats.

Holtmann said Marquette is a much better team than its record would suggest.

“We knew that when we played them the first time, that they are very capable,” Holtmann said. “They are athletic, they’ve got good players who play really hard. It’s going to be a great, great challenge (tonight).”

Holtmann said he thinks his team is aware of that and they are prepared for a “possession-by-possession, grind-it-out game.”

Tonight’s game is one of two remaining home games.

Excited about returning to Hinkle tomorrow for Jackson, Kam and Alex’s 2nd to last game. Great challenge from a team playing very well.

The grand scheme of things

Looking at the big picture, the Bulldogs are alone in third place after Villanova routed Providence 89-61 last night, and they are likely looking at an NCAA Tournament berth. Holtmann said the Bulldogs have put together a good season, despite losing two of their last three, as well as a key player.

“I think if you’re fortunate enough to have a good year, and you can put a good year together, really from start to finish, then there will be a time at the end of the year, when the year’s over when we can take a step back and say ‘wow, that was really rewarding,’” he said. “But we can’t do that yet because we’re right in the midst of it, and we’re a man down, so we’re really just focused on trying to get better.”

The Bulldogs have four games left in the regular season, including tonight. They head to Chicago, Ill. Saturday in search of a season sweep of DePaul University.

The Bulldogs host Georgetown on March 3, and travel to Providence on Saturday, March 7, then it’s time for the Big East Tournament at Madison Square Garden in New York City.

A win tonight would tie them for second place with Georgetown. The Bulldogs beat the Hoyas in the Battle 4 Atlantis in November, but it was an unofficial conference game, as both teams agreed to be in the tournament before Butler joined the Big East. Georgetown knocked off the Bulldogs 61-59 in overtime in Washington, D.C. on Jan. 17.

The top four teams receive a bye in the first round of the conference tournament, which puts a lot of weight on the last four games of the season for the Bulldogs.

Holtmann said things will be close right down to the end of the season.

“Every team in the upper half is sitting with seven or more wins,” he said. “So we know we only have four games left to play and they’re all four going to be a tremendous challenge.